Harbin Polar Land was opened in 2006 and is owned by the Haichang group. CCA investigators first visited this facility in 2015 and there has been little change in the facility, the animal shows but there has been a rise in ticket price. An expansion is in construction and CCA speculates that it seems to be a shopping complex with a whale shark paint on the wall; a mini zoo outside of the aquarium and from the posters, there might be some alpacas, ponies and other animals for feeding. 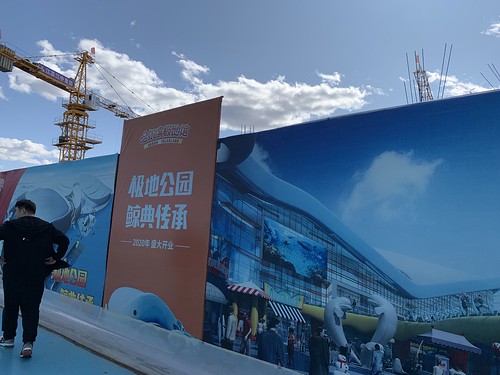 In 2015 our investigators reported two belugas in the show and another three swimming in a narrow channel area, this hasn’t changed and is still the same. Four shows a day seemed to still be the routine. Harbin Polar Land is very proud of its ‘heart of the ocean’ beluga water ballet and regularly promotes that it is an original choreographed show. According to Harbin Polar Land, this beluga show was widely reported and lauded by Chinese and international media including CNN, ABC, NG, Reuters, NHK.  There has been four years since our investigation in 2015 and the three belugas which live in the tunnel area have gained some weight and grown in size but tragically the tunnel area where they are kept has remained the same size. 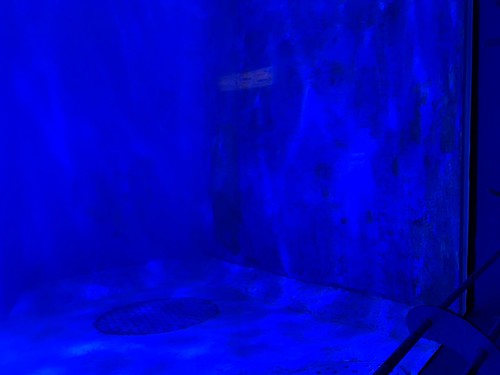 On 18th August 2019 a visitor posted a clip on social media of a thin polar bear pacing in a tiny enclosure. In 2015 our investigators recorded seeing only one polar bear but this year there were two. The pacing bear was still pacing – a sign of stress or ‘zoonosis’.  There was a feeding presentation and the keeper gave brief narration. Instead of introducing the animal’s natural behavior and habitat, the keeper kept repeatedly stated that one of the polar bears was performing on CCTV (China Central Television) in a spring festival gala as it was so intelligent. During the feeding, one bear seemed to be more interested in the food that was consisted of fruit vegetables such as carrots, and a bit frozen fish. The keeper threw food into the water area so the bear would jump in encouraging the visitors to take photo with the bear. 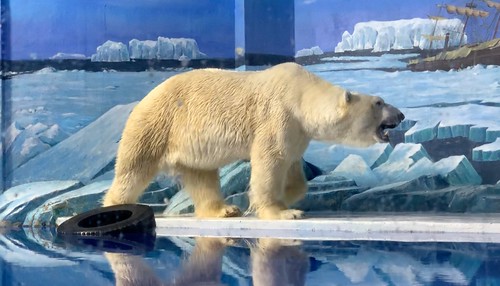 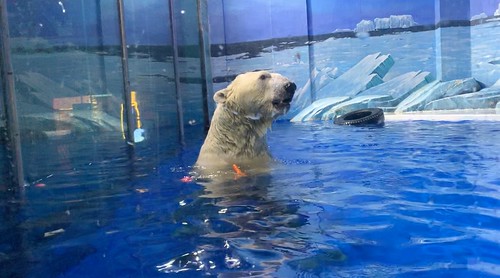 About six harbor seals were used for tourist feeding. People can spend 15RMB and feed five tiny fish to the seals. The experience was very old fashioned even down to the costumes the staff were wearing. Families with kids were clearly the target audience however we noted the irony in the sign “caution, seals can bite. Don’t litter, let’s care about the animals” as visitors were feeding the seals.

In 2015 there were two arctic wolves however this trip our investigators only witnessed one. The arctic wolves and foxes were in separate exhibits in 2015, but this time the lone wolf was packed into a very small area near the arctic fox exhibit. All the animals looked lethargic. 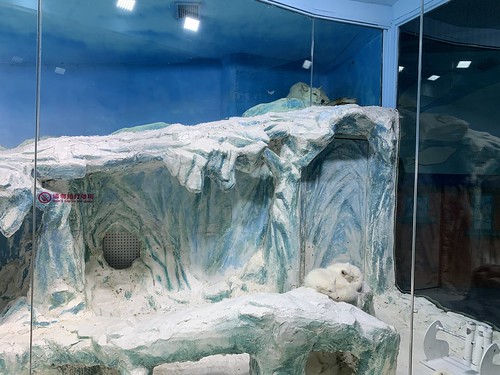 There were only two sea lions in the show in 2015, and this time I saw at least four in the performing arena. There were two walruses in the show, one had intact tusks, one had them cut. The lighting and the music were harsh and the narration was cheesy and nothing do to with education or conservation. In the first show, the sea lion was not responding to the orders so in the second show it was replaced there with another sea lion.  The performing sea lions and walruses seemed to live in the two tiny adjacent pools to the performing stage and we speculate this was all of the space allocated to them at any time. 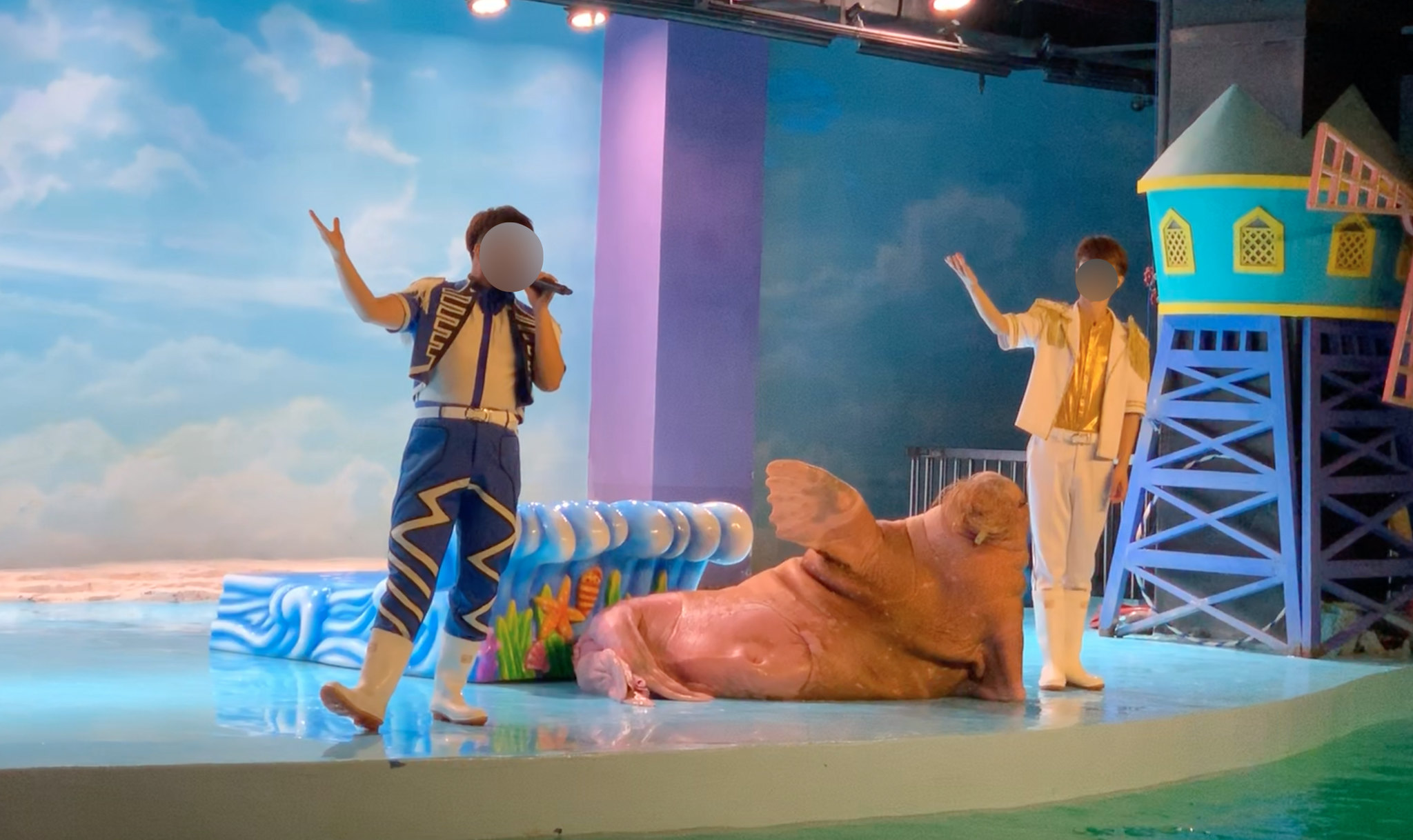 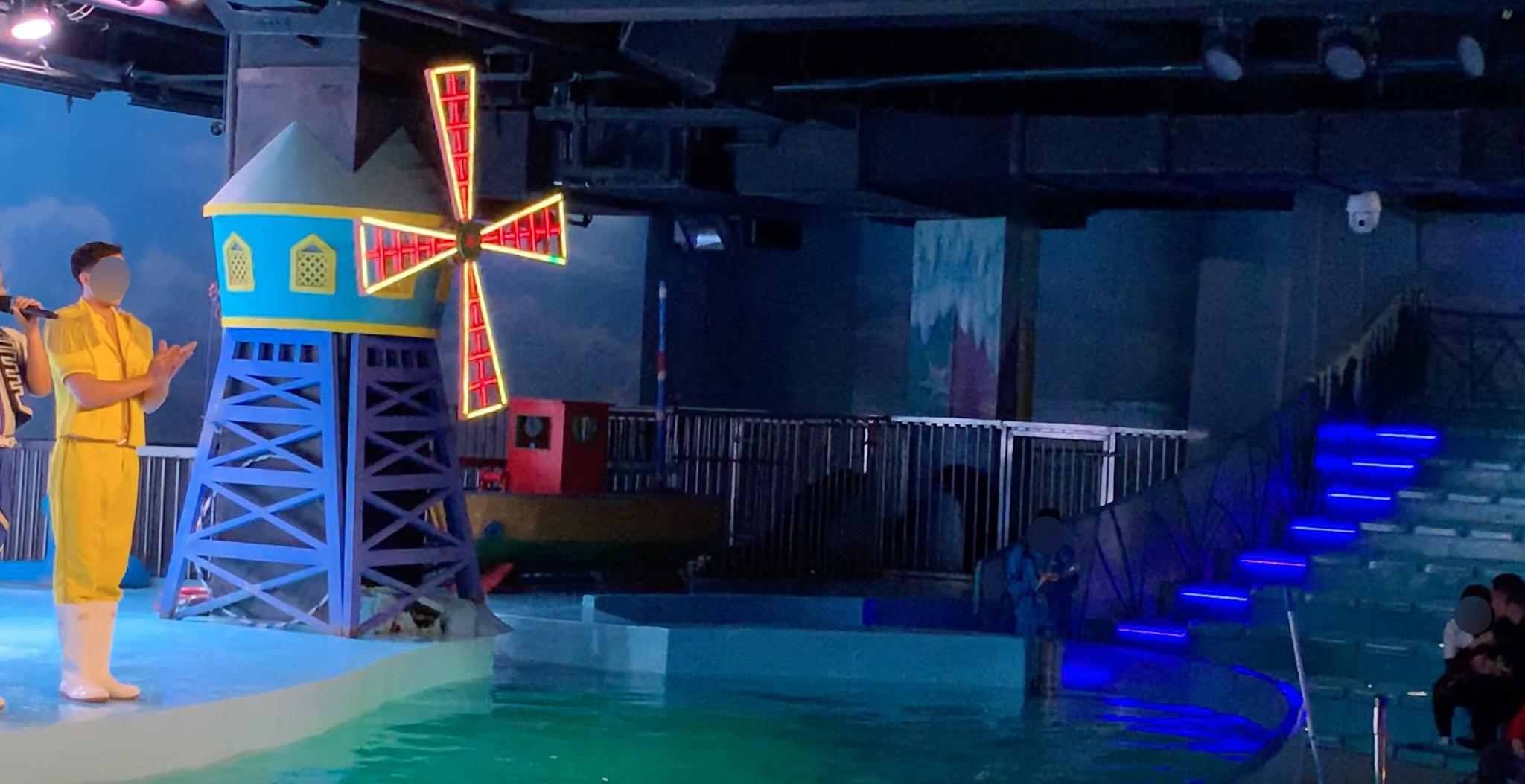