Since the opening of the Grandview aquarium in early 2016, there have been numerous reports of large numbers of fish deaths, the mysterious disappearance of a whale shark (which is presumed dead) and a media frenzy surrounding the deplorable condition of Pizza, labelled ‘the world’s saddest polar bear’.

Since Grandview became the first Chinese mall to have an aquarium, many other shopping malls have attempted to follow suit with varying levels of success.

Visitors to Grandview may think that they are educating their children and learning about the animals. However, they are being subjected to misleading information on where the animals were caught and the way they are treated, including being told that the animals love to perform.

Grandview reportedly purchased six wild caught beluga whales from Russia, but our recent investigation only found four at the aquarium. The staff of the aquarium said they did not know of the circumstances of the whales’ disappearance.

The whales that remain have very limited space, and each day they are forced to perform unnatural behaviours such as curling their bodies into circles and kissing members of the audience as part of choreographed performances. The performance witnessed by our investigators showed one whale not responding to its trainer as requested clearly showing signs of boredom with its routine.

In addition to performances, the belugas are also forced to have photos with the tourists, who pay 100RMB each to touch them, potentially causing these individuals a great deal of stress.

The living environment is completely inadequate for the whales, being far too narrow and without enrichment to keep their active minds stimulated.  Each whale showed obvious stereotypic behaviours, some continuously circling the pool using their forehead against the wall to turn. Others vacantly stayed at the bottom of the pool, only moving to come up for air at the surface.  We also witnessed the whales continuously holding their bodies vertically in the water, looking for food from the trainers.

Freedom to swim, hunt, explore a vast ocean and enjoy a community life is not possible for these majestic animals in captivity. 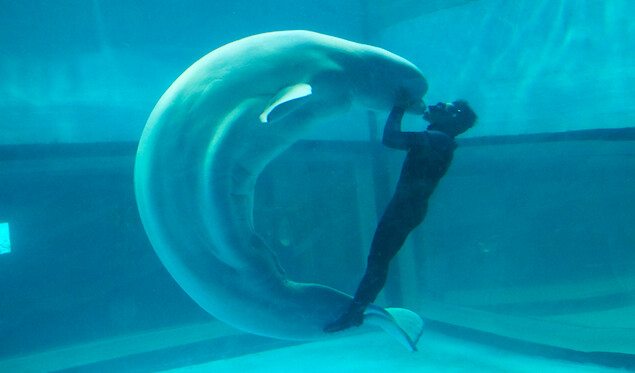 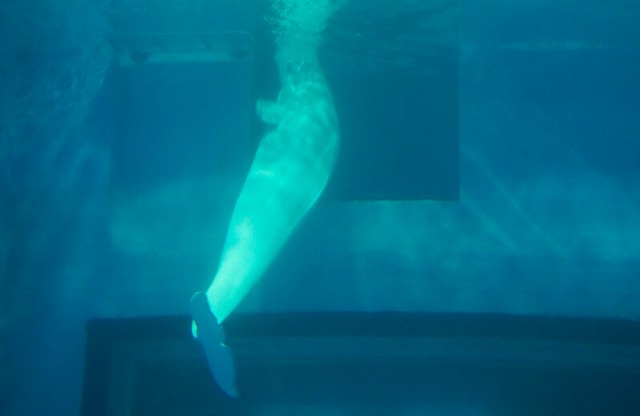 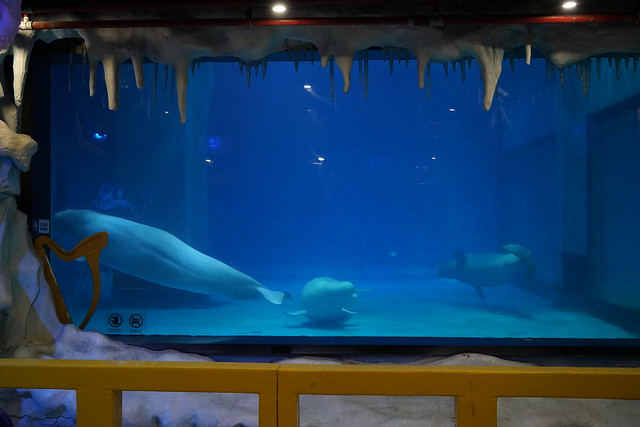 There are approximately seven spotted seals here, who can be fed by the public. Just a few meters from the seal pool there is still a strong smell from the disinfectant and almost all of the seals’ eyes are closed or squinting, possibly due to the poor quality of the water. The seal pool is very small and the food they were fed appeared to be of poor quality. 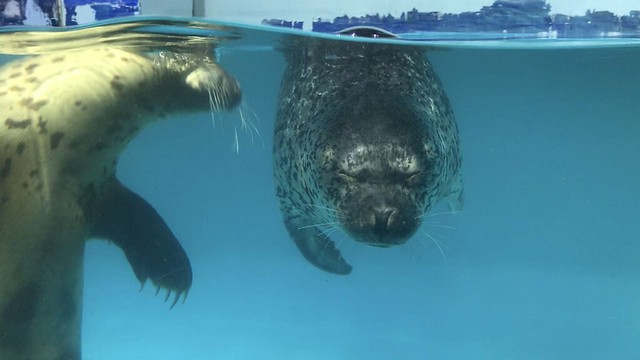 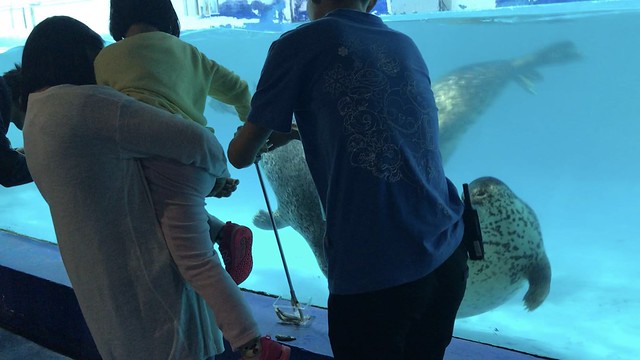 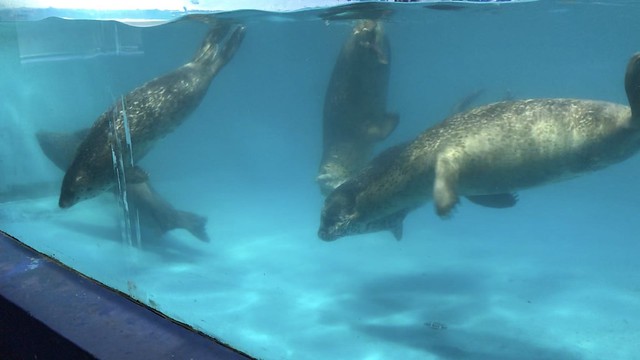 The map showing the distribution and descriptions of spotted seals is also incorrect, stating that the seals originate in the Atlantic Ocean when they are commonly found in the northern part of the Pacific Ocean. 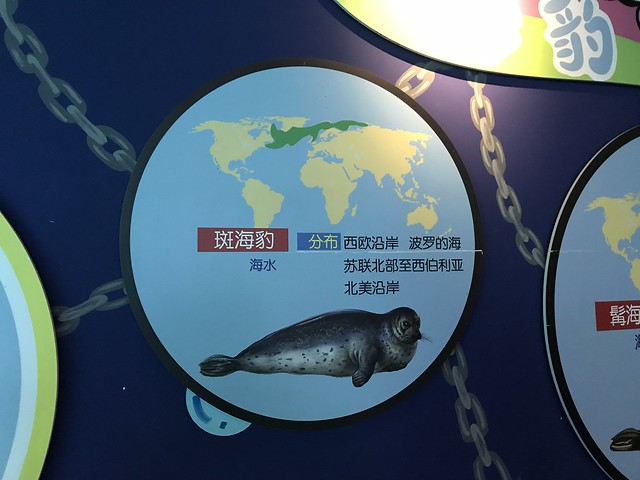 Two sea lions were housed next to the seals, in a small 1.5m x 6m pool.

There was also a lone sea lion separated by a  wall, with the total space being no more than 1.5m x 1.5m with a water depth of 1m.

One of the sea lions was observed using its snout to smash the bottom of the pool, although there was nothing but  debris and excrement at the bottom. 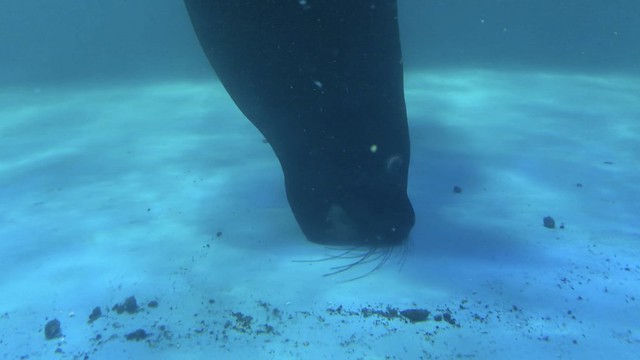 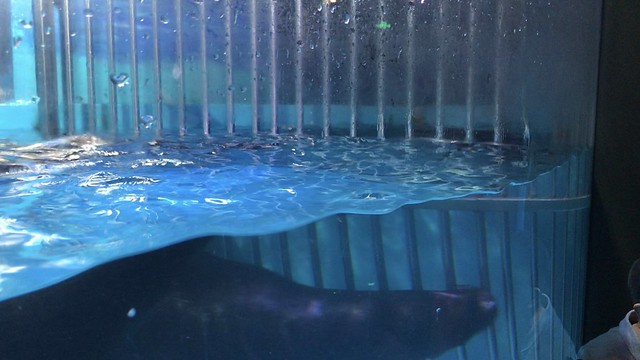 There is one young walrus in a pool which is again extremely small at only 4m x 1.5m. The water depth is no more than 1m. 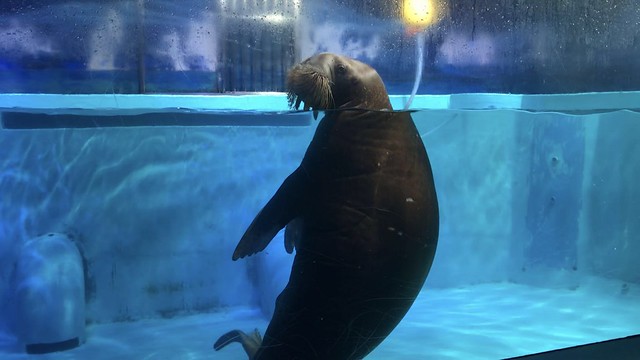 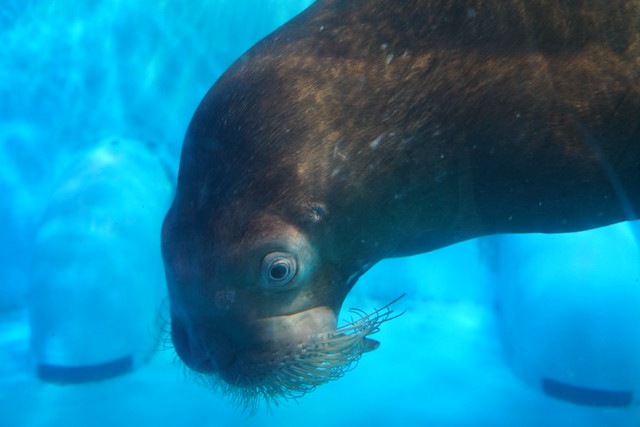 During the time we observed him,  the young walrus had no choice but to go back and forth in this small space and in order to turn around he had to push the wall with his pectoral fin.  The pool had no enrichment, no shelter, and the walrus had no companions. 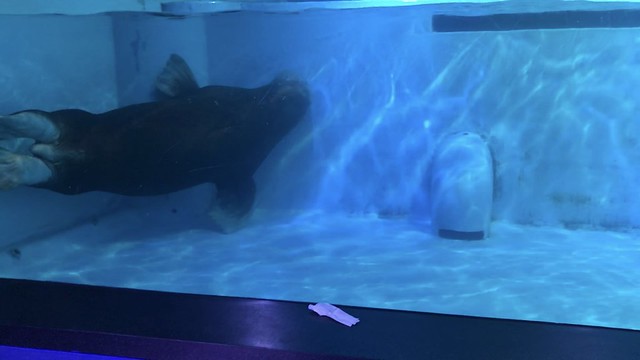 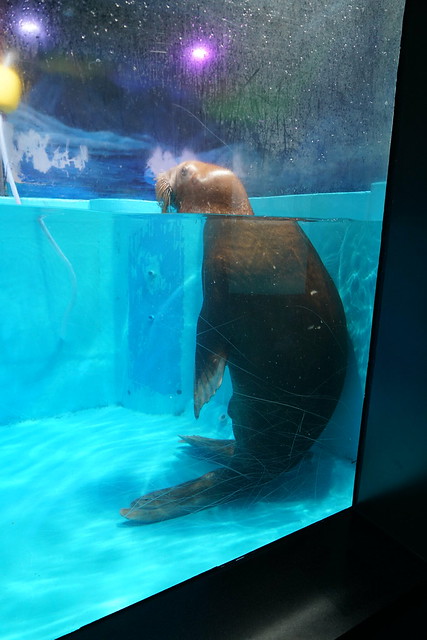 There are 2 Alaskan malamutes in the Arctic Wolf Pavilion. Malamutes need a large outdoor space but unfortunately these dogs are confined to one small room with no sunshine, no grass and very few toys. 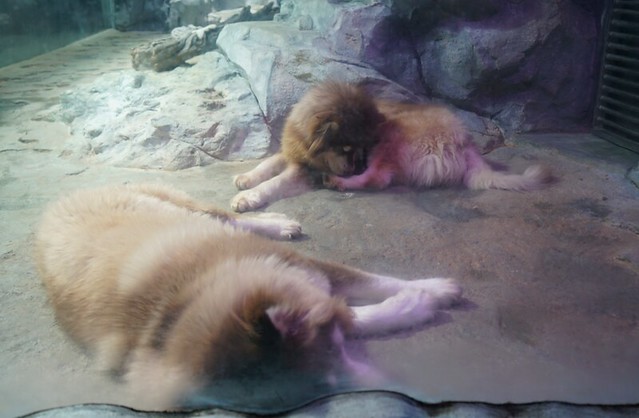 The whale shark pool has now been emptied and completely sealed. The whereabouts of the animals that were in the pool is unknown and there is no explanation for the public. 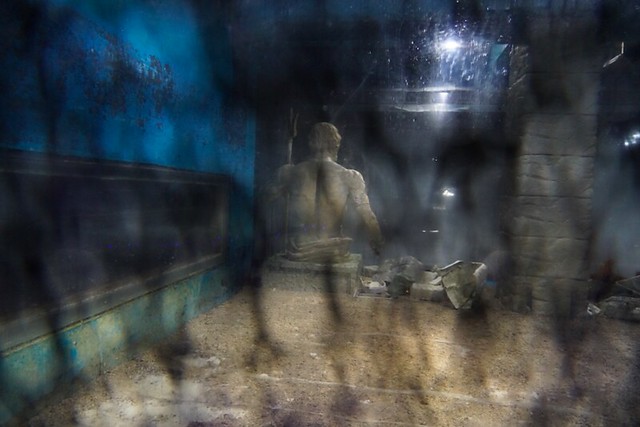 The top of the snout of the lizard has worn away completely, exposing its teeth.  One reptile expert told the China Cetacean Alliance that this was possibly because the iguana had run into the wall of its enclosure. He said:

“If the glass of the terrarium is close to the outside, the animals can see the environment outside and they will have the urge to climb outward. Over time, it will cause this wear and tear. In addition, if the lighting in the terrarium has always been turned on and there is a lack of places to shelter or hide, it will also cause the animal to be nervous.” 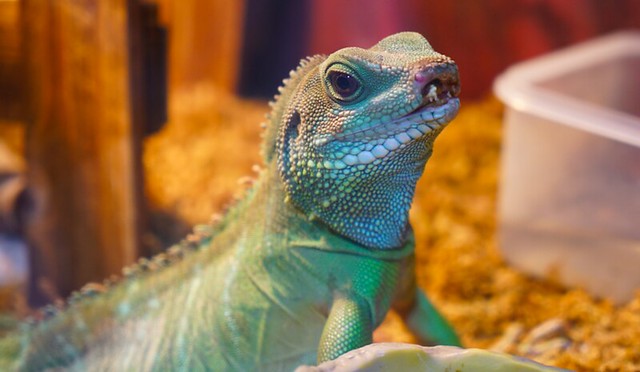 Meng Pet Paradise and Polar Ocean World are on the same floor of the mall. The entire area is smelly and noisy from the dogs barking. 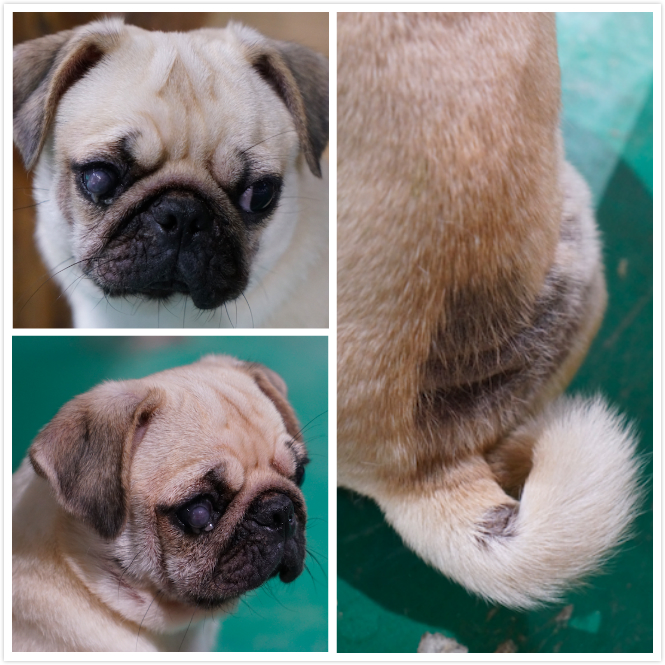 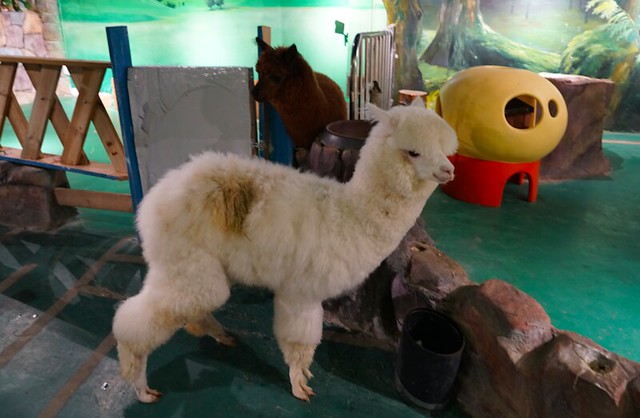 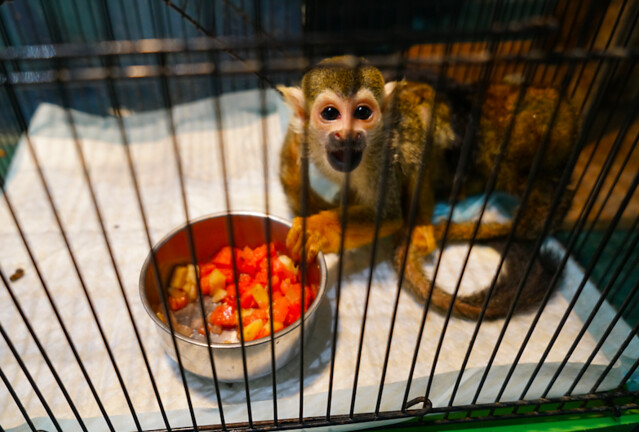 Our investigators were shocked and distressed to see a dead budgie being eaten by the Brazilian red-eared tortoises. 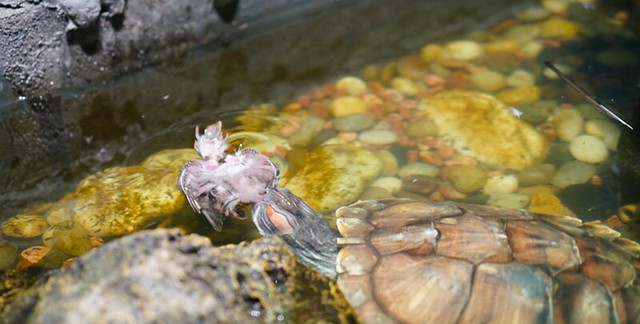 Our investigations into the expanding aquarium industry show that facilities like the one in this investigation are fraught with shocking animal welfare standards, incorrect or misleading information, animal performance, high rates of mortality, injured animals being left without veterinary care and poor sanitation.

Please share this information and the truth about the aquarium industry.
Please learn about animals and their habitats through books, documentaries and responsible field observations and do not become accomplices in wild capture, captivity, breeding, and animal performances.