Nanning Zoo is another typical city zoo in China with small enclosures, many animals and a lack of information boards or education materials. It holds a Chinese white dolphin (Indo-Pacific humpback dolphin) called Lao Bai who broke his upper jaw by accidentally inserting it into a tube in the tank and then panicking, or so the zoo claims. Sadly, this incident occurred during the night so the poor animal was not noticed until the next morning.

CCA uncovered Lao Bai’s and other performing animals’ situation in Nanning Zoo in 2017, which meant that during our visit to the zoo this time, most theatrical performances were canceled and Lao Bai was kept in an indoor tank in a public exhibit. 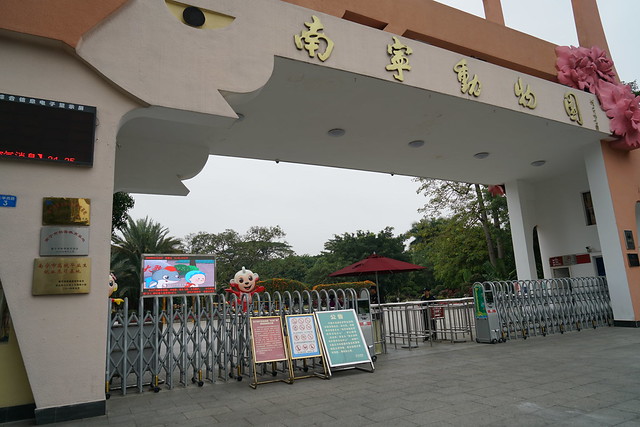 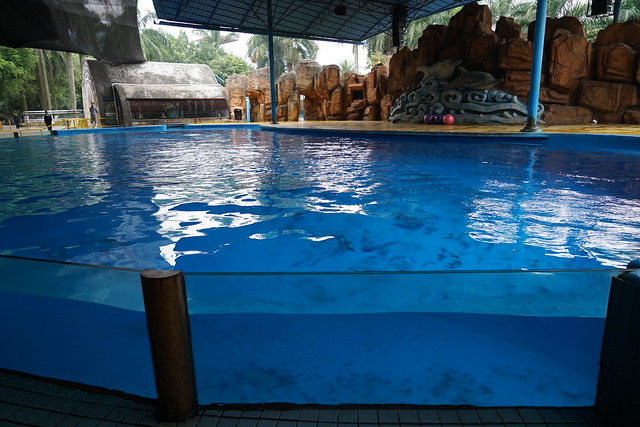 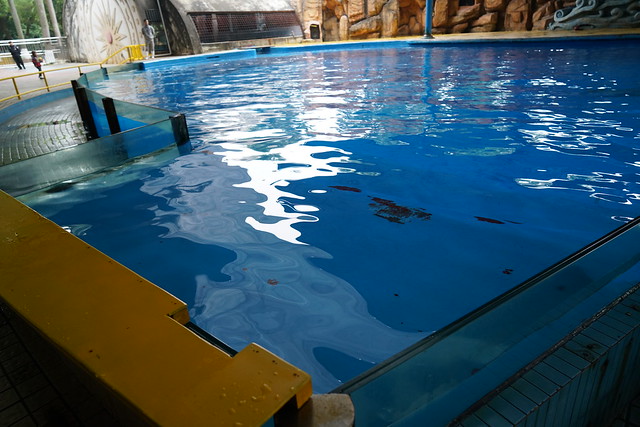 During our visit, the two bottlenose dolphins gave a typical theatrical performance including tail walking, jumping and fetching buoys. No visitor interaction was seen on the day of our visit. The dolphins only have access to the bigger performing tank during the shows and their holding tank is small with a roof and fence but cannot be seen clearly from the outside. The walls had both mould and peeling paint. No enrichment was seen in the performing or holding tanks and there was no educational information given at all during the show. 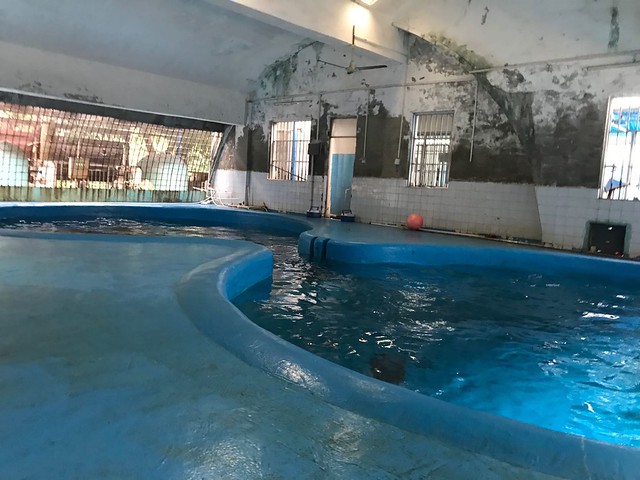 The information boards mainly contained local news reports on the conservation efforts by the aquarium to save dolphins and turtles; however, the boards noted that almost every dolphin the zoo claimed it had rescued ended up performing.

Lao Bai was kept in the indoor enclosure for the whole time, and a guard was cautious about people who got closer to him. 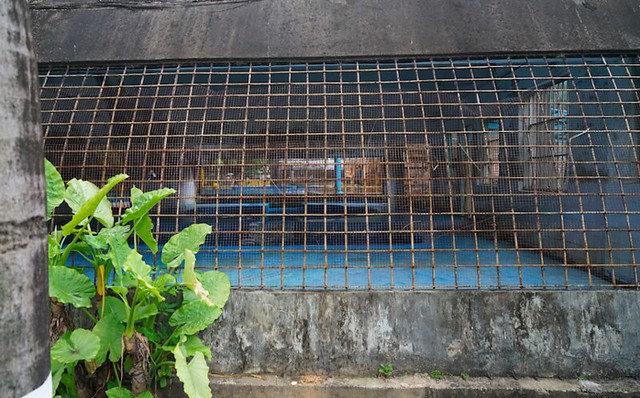 Two sea lions gave performances before the bottlenose dolphins and after the show people were asked to leave their seats and could only see the animals outside of the arena. Three fur seals were in different enclosures which were very small, about 3m by 2m, and the water was dirty. 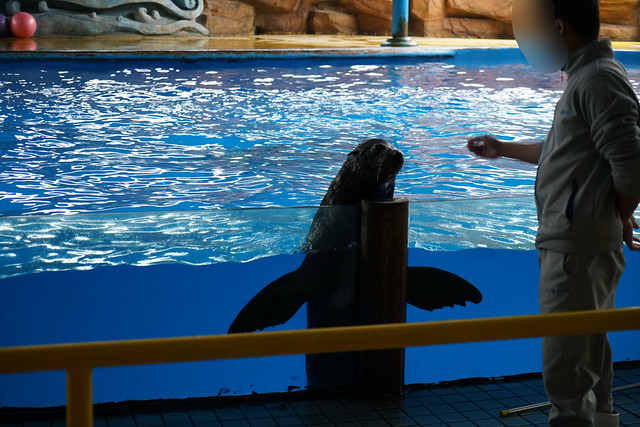 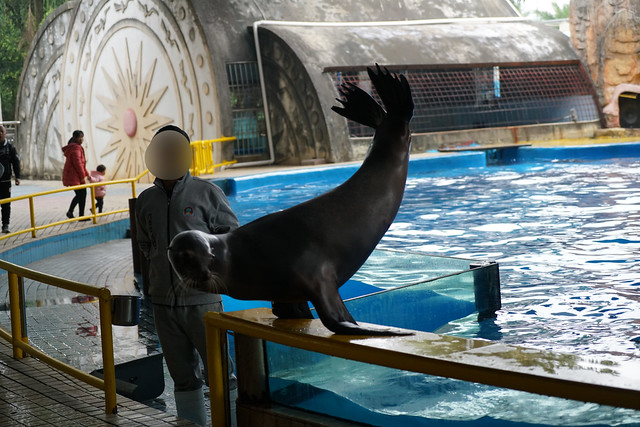 When CCA visited Nanning Zoo last December, we saw ten Asian elephants, some of whom were performing in a circus type show, along with many more animals.

When we were at the zoo for this visit, only two elephants could be seen from the outside and the entry to a viewing platform was blocked. The theatre was closed, with a sticker saying ‘facility maintenance’. These two elephants were used in a so-called behavioural exhibition where some unnatural behaviours were displayed, such as kneeling down to greet visitors. 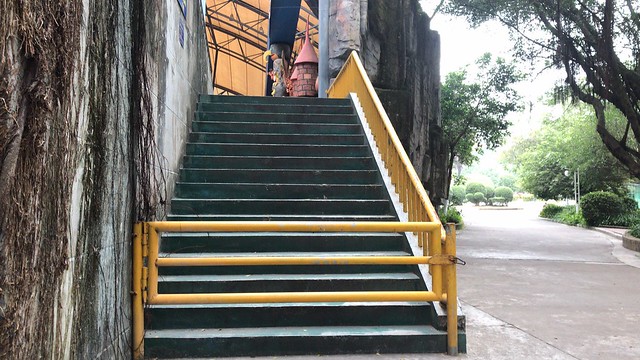 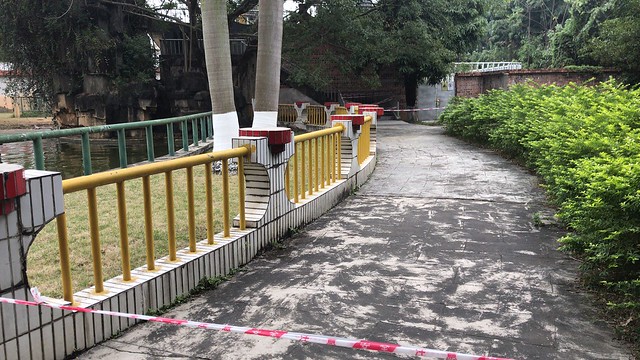 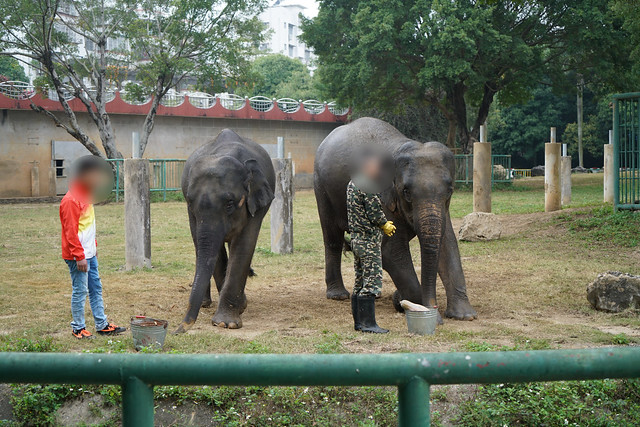 The outdoor area has a lower area at the bottom where two brown bears were begging for food when they saw visitors approach. There were a few bald patches on each bear’s face. We do not know whether the bears get along with each other. A third bear was kept in a cage. 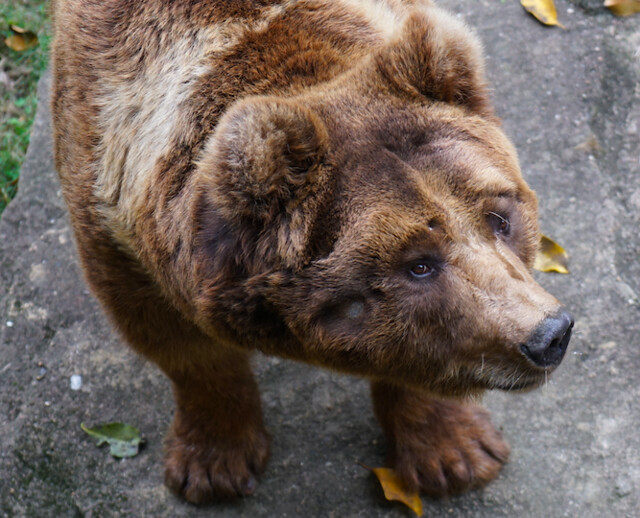 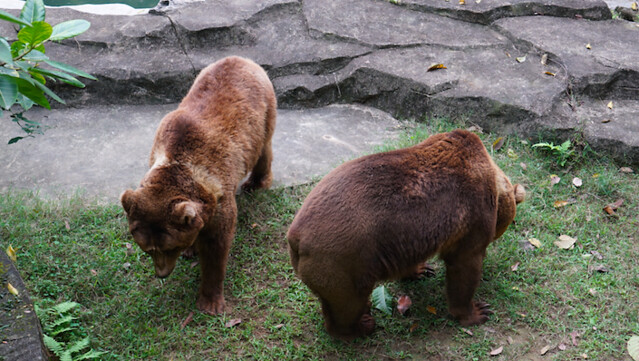 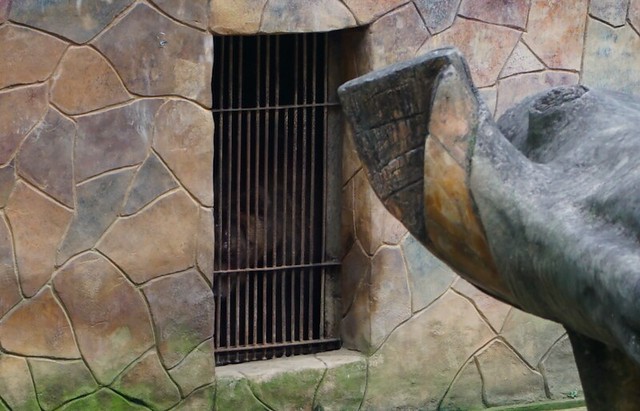 There were many species of primates kept in small cages with little enrichment. Most animals begged for food from visitors. The information boards and other educational materials were not adequate. 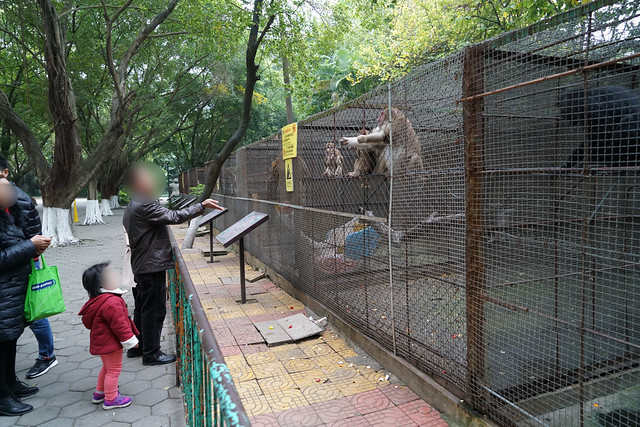 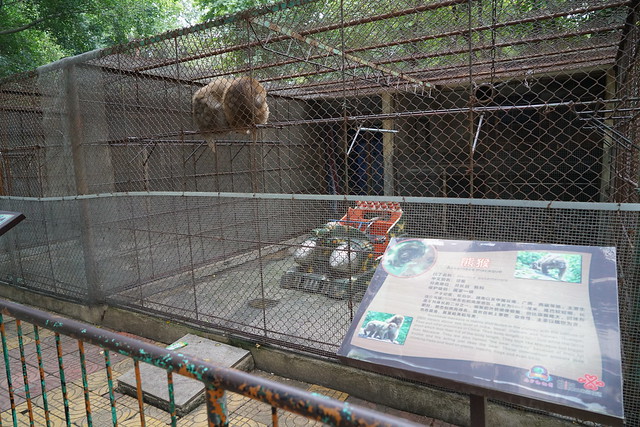 Lions, tigers, white tigers and leopards were all in poor condition with little enrichment and the cages for the big cats were extremely small. A netizen told us  that the big cats can be purchased at a cheaper price than many foreign animals and this could be the reason for the poor care they get from local zoos. A male lion there was particularly skinny. 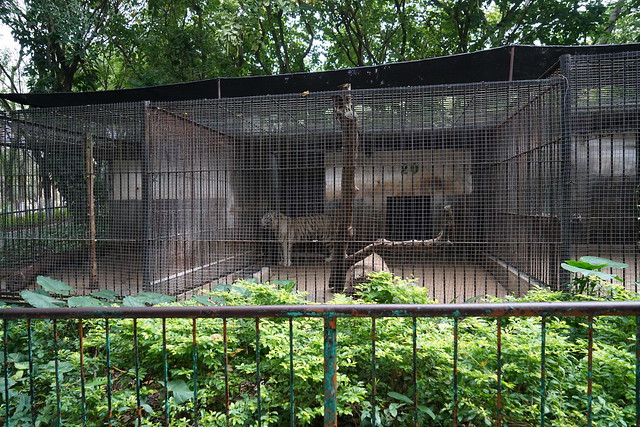 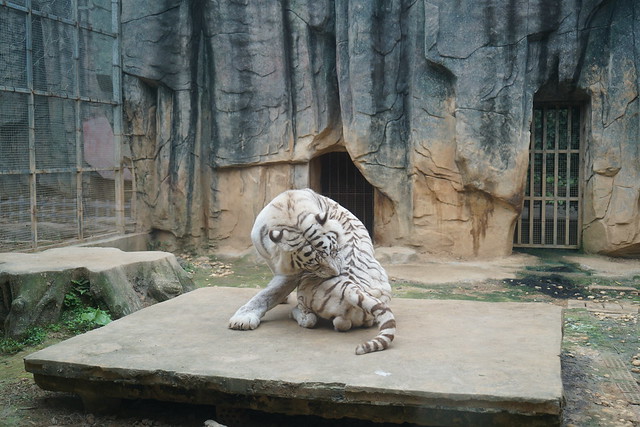 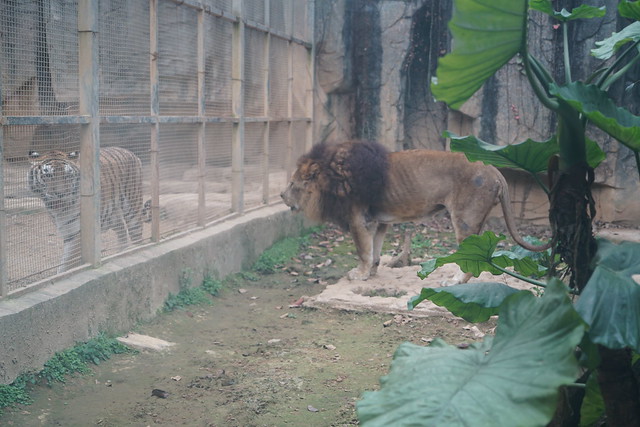 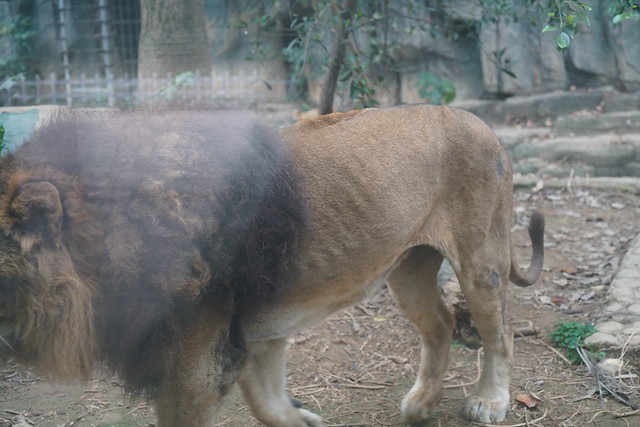 Two llamas and two goats were put in an area where visitors could pay to feed them. The llamas’ necks were bald which was very noticeable against their furry bodies. We are not sure whether this is normal or an indicator of stress. 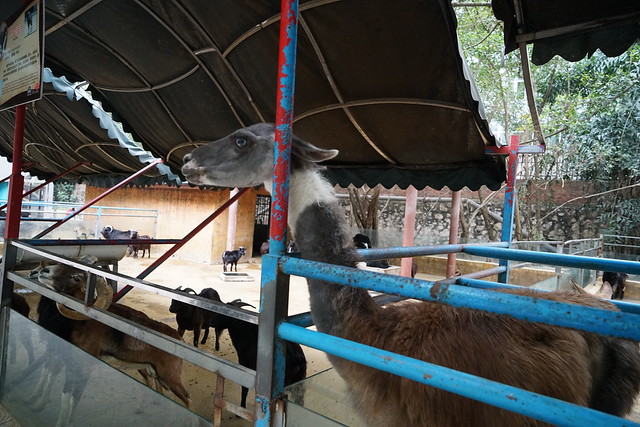 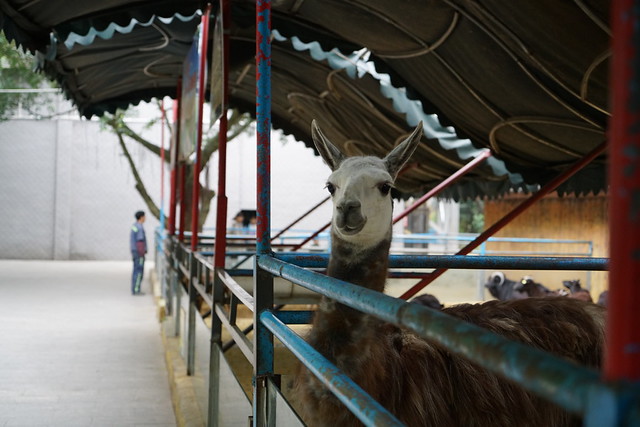 Two green sea turtles were in a tiny enclosure outside of the dolphinarium. There was no enrichment or food and nothing but artificial sea water and sediment in the tank. 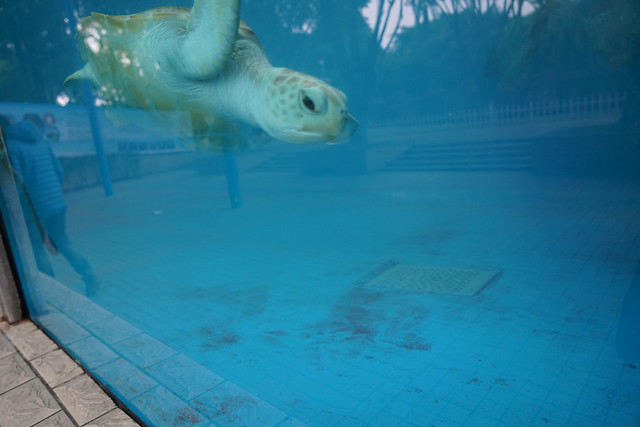 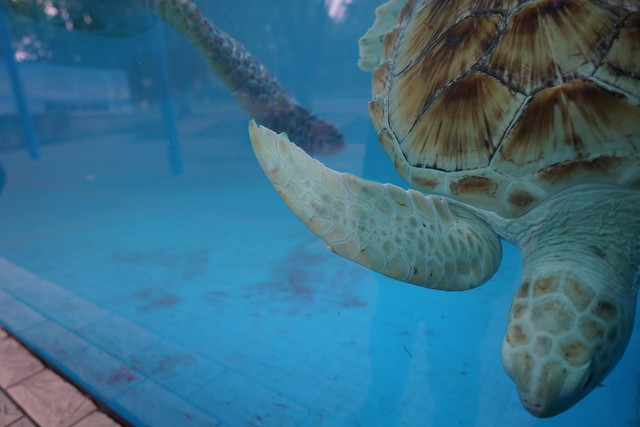 There was a breeding and rescue center in the zoo which was not open to the visitors. When we walked nearby we heard calls of a gibbon but could not see the animal.  CCA speculates that this centre focuses predominantly on breeding and not reintroduction of the Gibbons. 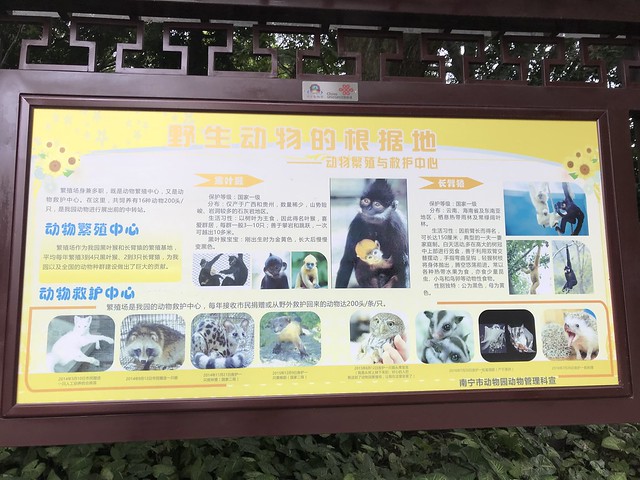