In 2013, the Wanda Group announced that it would build the self-proclaimed “world’s largest aquarium” in Nanchang, Jiangxi. We were very sorry to hear this well-funded and well-resourced company had entered the aquarium industry. This industry in China is based on wild animal capture, trafficking, captivity and animal performance, which does not reflect the Wanda Group’s self-image as a forward-looking attitude and social responsibility of the company; it gives the public a lot of misleading information and harms the captive individuals and their wild populations.

Nanchang Wanda Aquarium, which opened in May 2016, is an aquarium built inside a busy shopping mall with no sunlight, but full of noisy crowds and background music playing through speakers. The aquarium is currently the only aquarium in China that provides a VIP tour, where visitors can pay to go behind the scenes, gaining direct contact with the animals. The promotional posters show children close to wild animals with no barriers, no life jackets and no hygiene procedures in place.

The CCA’s recent investigation into the Nanchang Wanda Aquarium at the end of 2017 found the facility in poor condition. For example, the paint on the tank walls of the dolphin performance hall and the tank decks where the dolphins slide out (come ashore) have traces of paint peeling.

The CCA was sent a photo showing dolphins huddled together in a tank where the water was so shallow it did not even cover their bodies. In another photo, the tank had been almost completely drained of its water, leaving the dolphins stranded on the tank floor. There were several people scrubbing the algae growth off the floor and walls of the tank—this is a very old-fashioned way of cleaning tanks, very stressful for the dolphins, and no state-of-the-art facility does this anymore. They use filtration and other methods to maintain hygiene, which do not require draining the tank. 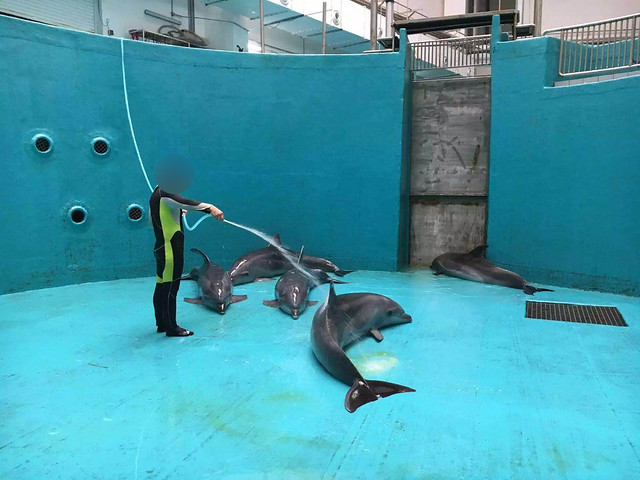 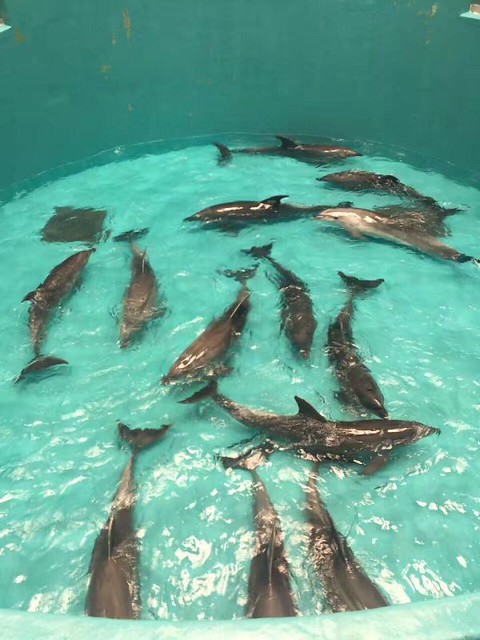 The California sea lions were seen doing handstands in exchange for food. Visitors are in close contact with animals, with no protective gear at close range. When animals have no choice and are caught, bred and sold, performing tricks that have nothing to do with their natural behaviour or habitat, a visitor is not getting a kiss, but is part of forcing the animal to be used as a tool and plaything. 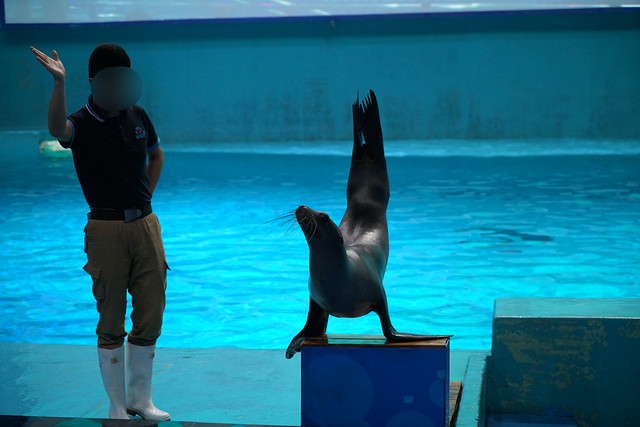 In an earlier news release, the whale shark was highlighted as the “treasure of the town hall”. The tank that displayed the whale shark now holds some other fish species. Ironically, a LED screen showed an image of a wild whale shark next to the tank.  Luckily, the two whale sharks that were about to be sold to Nanchang Wanda Aquarium got rescued by a local animal protection agency, and remained in the ocean.

According to previous statistics Nanchang Zoo imported two Japanese bottlenose dolphins in 2012, and one from an unknown source was imported in 2013. When CCA visited, we only saw two dolphins and the staff would not respond to questions about the number and source of the animals.

Visitors can only see these dolphins during the performances, which means the dolphins only have short periods during the day to swim in a slightly larger tank. Next to the oval performance tank, there are two holding tanks that are less than two meters wide. One of the tanks appeared to have sediment or algae at the bottom and the water inside seemed to be darker than in the other tanks.

The eyes of the performing dolphins were mostly closed, likely caused by irritation from the poor water quality. There was a build-up of salt crystals on the sides of the tanks and the bays of each tank were rusted and aging. The walls above and below the water have obvious signs of paint chipping off. 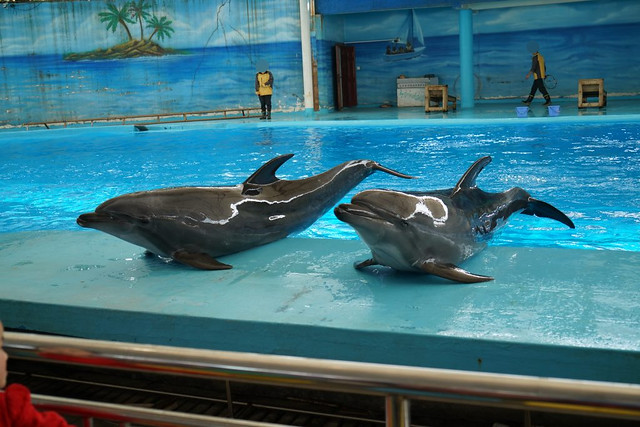 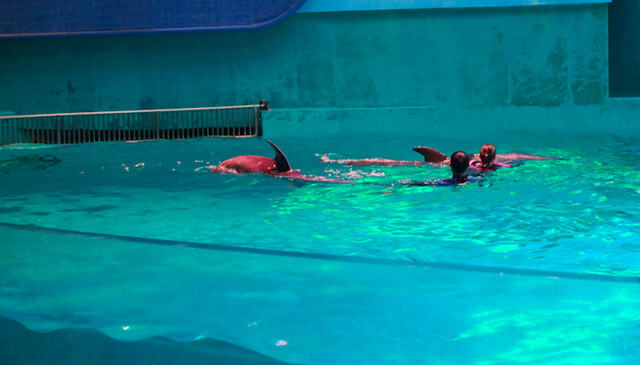 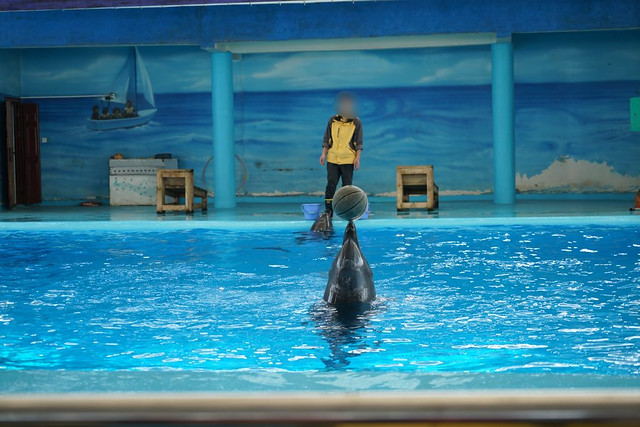 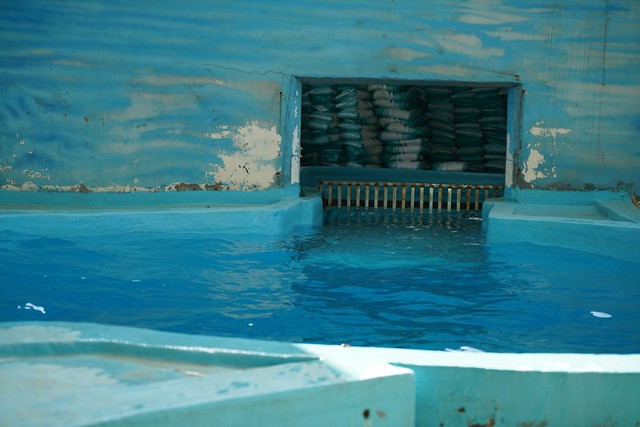 There was a male fur seal whose right eye had a severe cataract, rendering him completely blind in that eye. In addition, the skin of the right pectoral fin had some kind of condition, yet this fur seal still had to perform for a few dead fish. 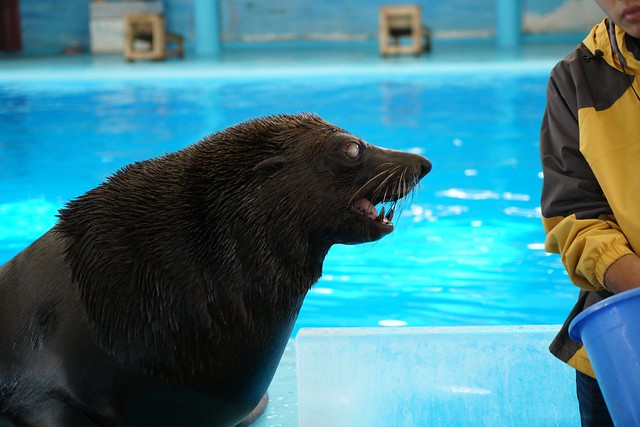 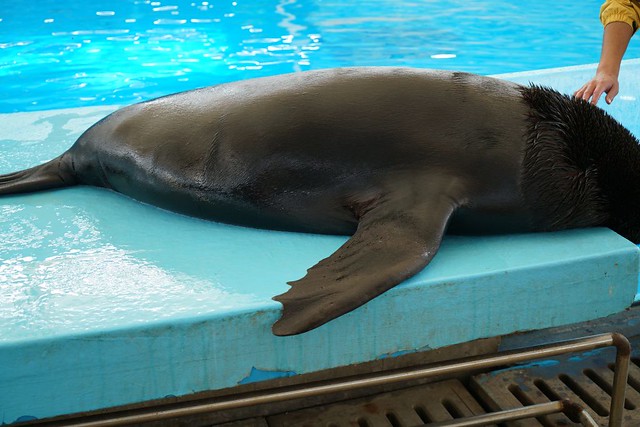 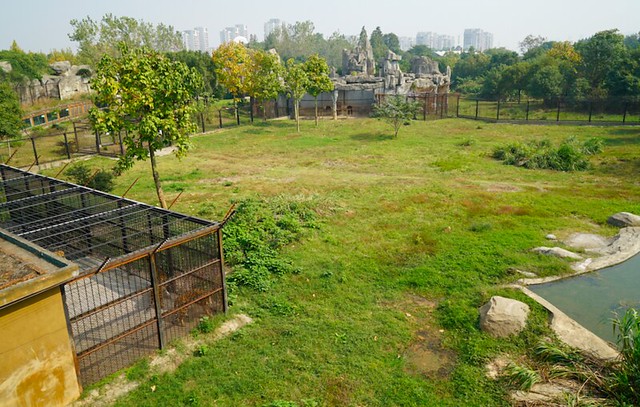 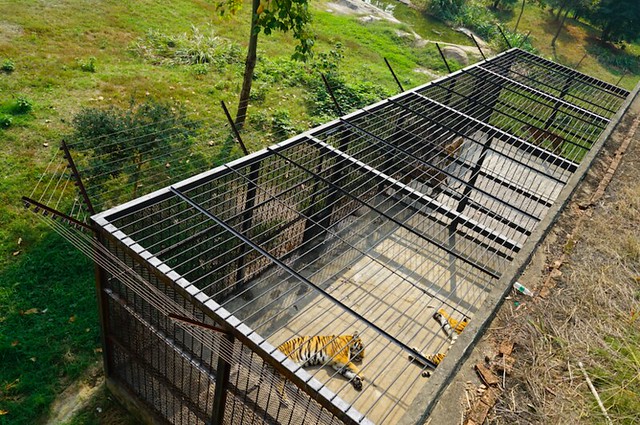 There were also several other kinds of tigers near the animal behaviour exhibition hall. There was no soft substrate in the cage, no enrichment, no shelter–it was nothing like natural habitat. Nothing except the animal’s droppings and urine stains could be seen in the enclosure. 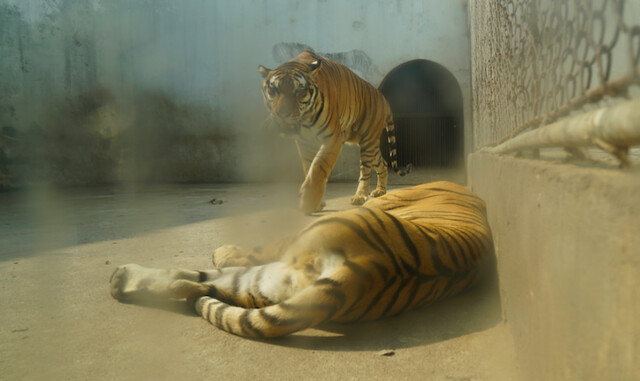 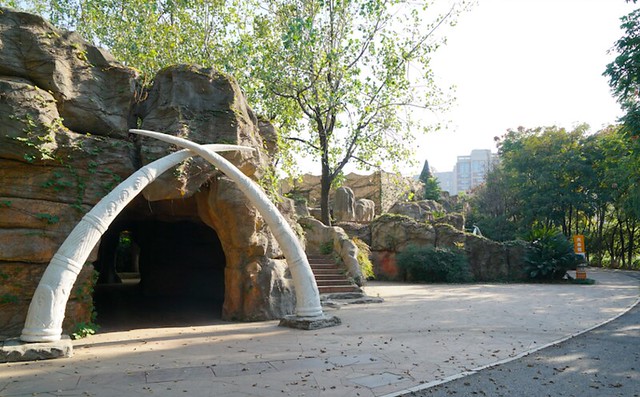 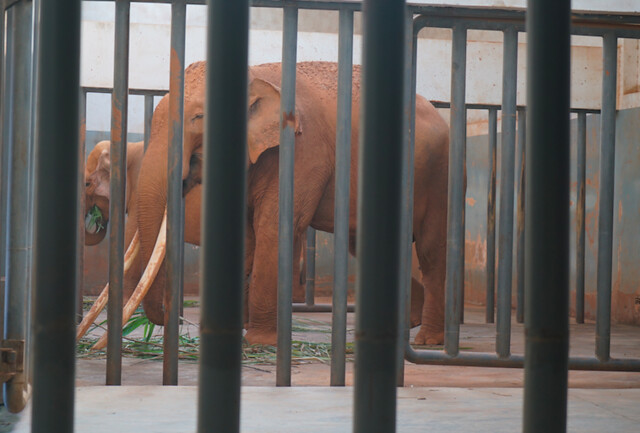 Pied Hornbill
One of the most shocking scenes was the hornbill bird.  This poor animal was very clearly suffering immensely at the facility. 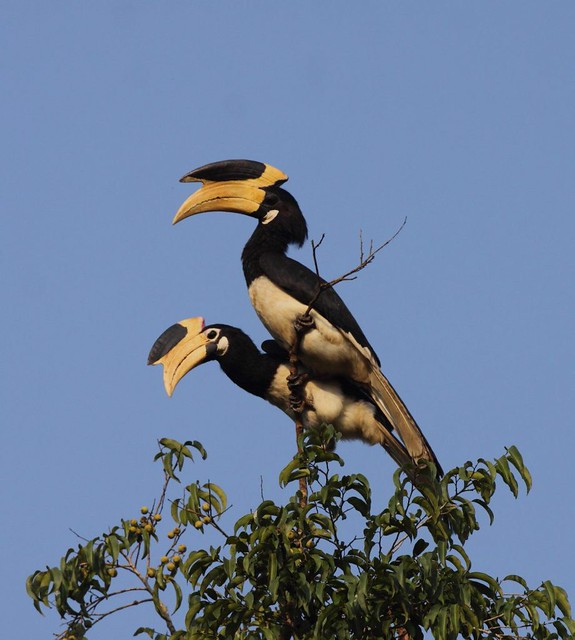 For comparison, here is what the Pied Hornbill should look like in the wild. 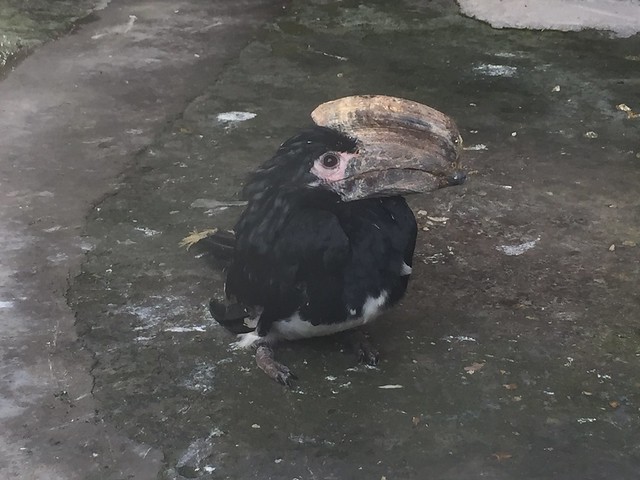 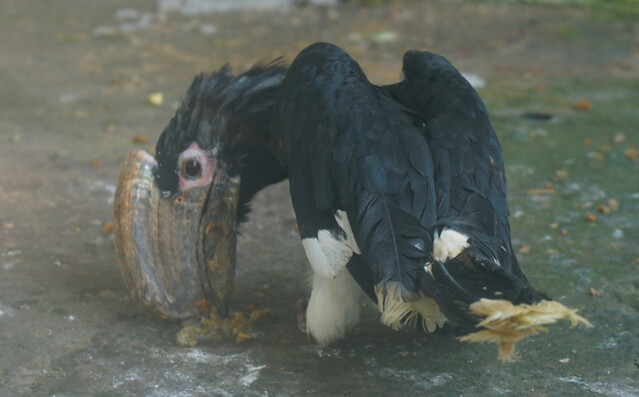 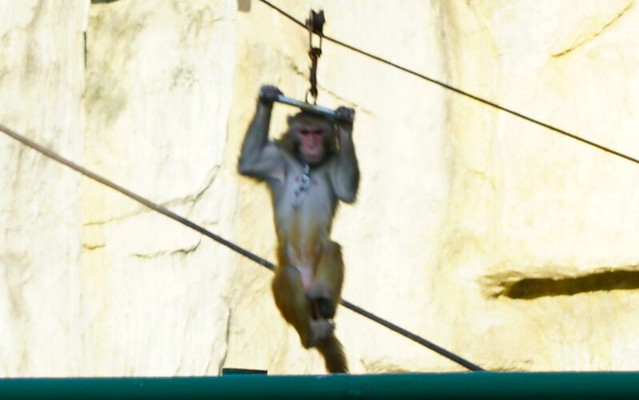 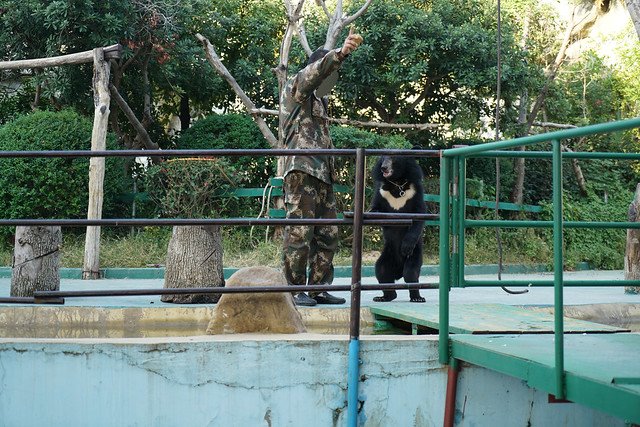 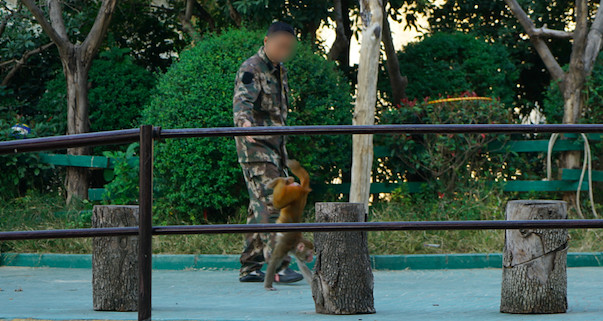 Originally, this venue was not subject to a CCA investigation, as we knew it did not have any captive cetaceans. However, we were informed that the situation was bad, so we added it to our list. Sadly our findings were not positive.

Seals
There are two seals displayed in a tank. There was no filtration system for the water and the tank was filled with plain tap water. The smell was noxious.

Both seals have cataracts and repeatedly scratched themselves. They only raised their heads briefly above the water when they needed to breathe. Seals in the wild rest on the shore or on rocks and their claws are kept short by abrasion against rough substrate. However, in this facility they are subjected to an extremely noisy environment (and thus rarely haul out on the deck) and their claws have become overgrown with lack of opportunity to wear against any substrate. 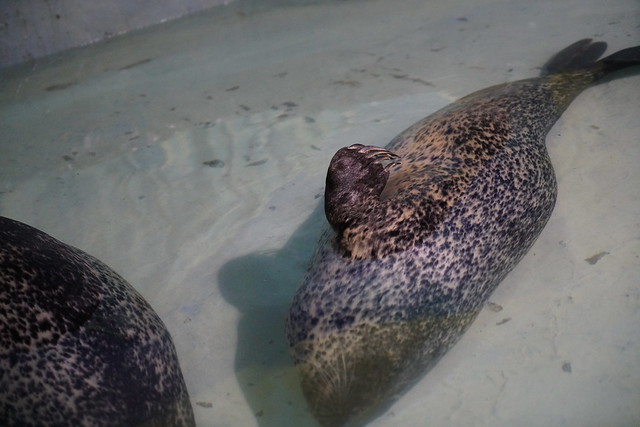 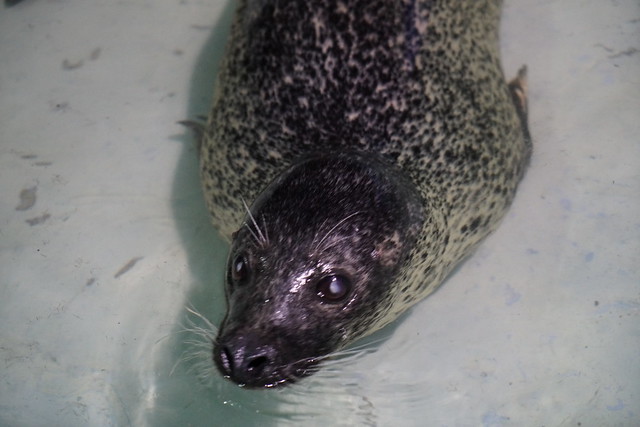 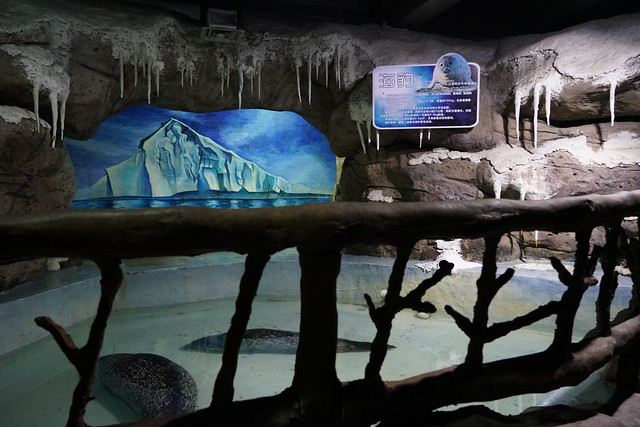 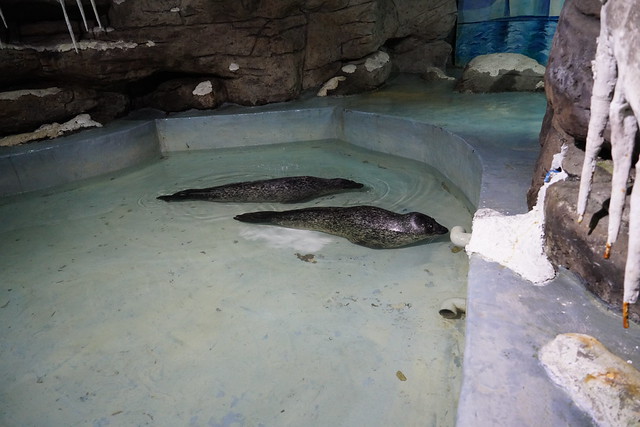 Sea Lions
There was also a sea lion performing during our visit. It appeared very thin and there were bald patches on its body. But even with such poor body condition, it was still being forced to balance upside down. It was a sad sight. 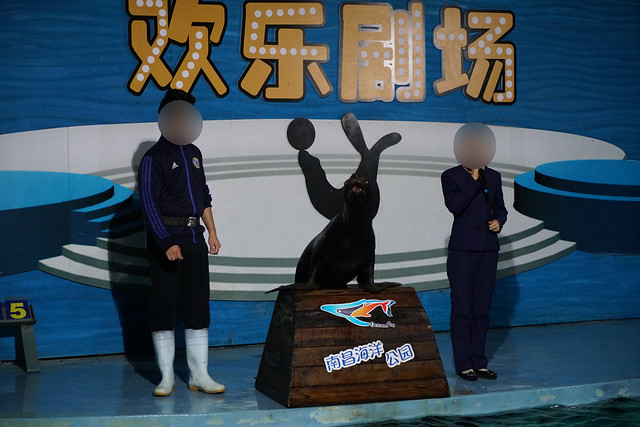 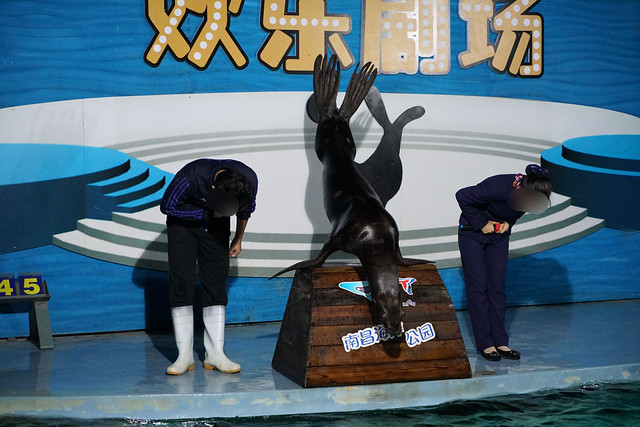 There were another three sea lions housed in a very small tank, less than 8 meters in diameter. They could only swim round and round in a circle and there was no enrichment or shelter in the area for them. 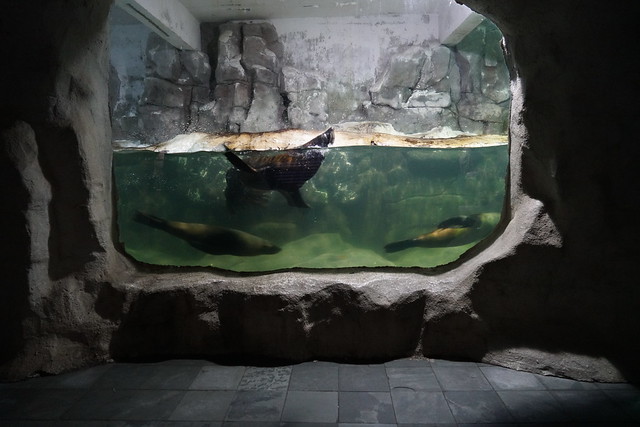 Guinea Pigs
The guinea pigs were bald, perhaps suffering from a skin condition or from repetitive grooming from stress or boredom. 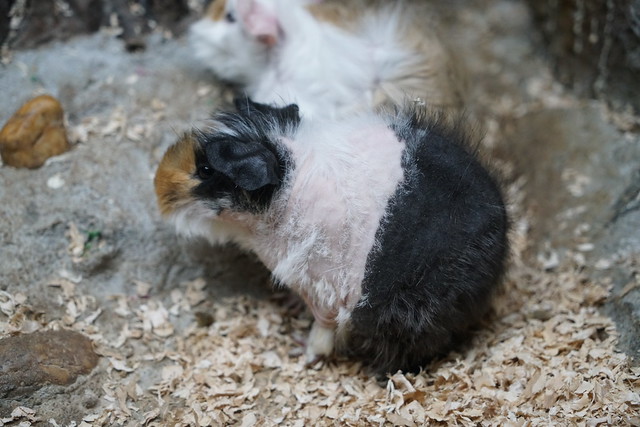 Despite this trio of facilities–Nanchang Wanda Aquarium, Nanchang Zoo and Nanchang Ocean Park–promoting their attractions as educational and as having healthy, happy animals, the CCA investigation shows the opposite. These businesses use animals to make money, and have nothing to do with protection and education.

Please consider where you spend your money and time. What kind of experience do you want your children to have–misleading information or true nature education? If it is the latter, then aquariums and other venues with poor animal welfare should not be your choice.