Shenzhen Xiaomeisha Sea World, which opened in 1999, is a major attraction in Xiaomeisha Beach, Shenzhen city.  The CCA’s investigation took place on a weekend and the facility was full of visitors, most of them school kids and families. At the entrance, there was a sign for Shenzhen Popular Science Base, which was established in 2000. 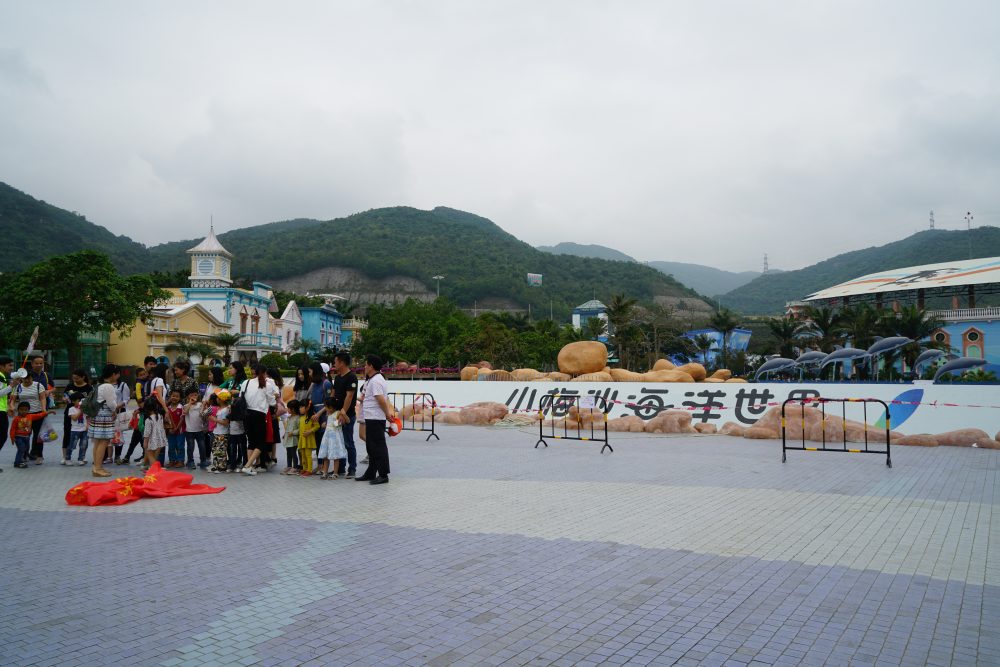 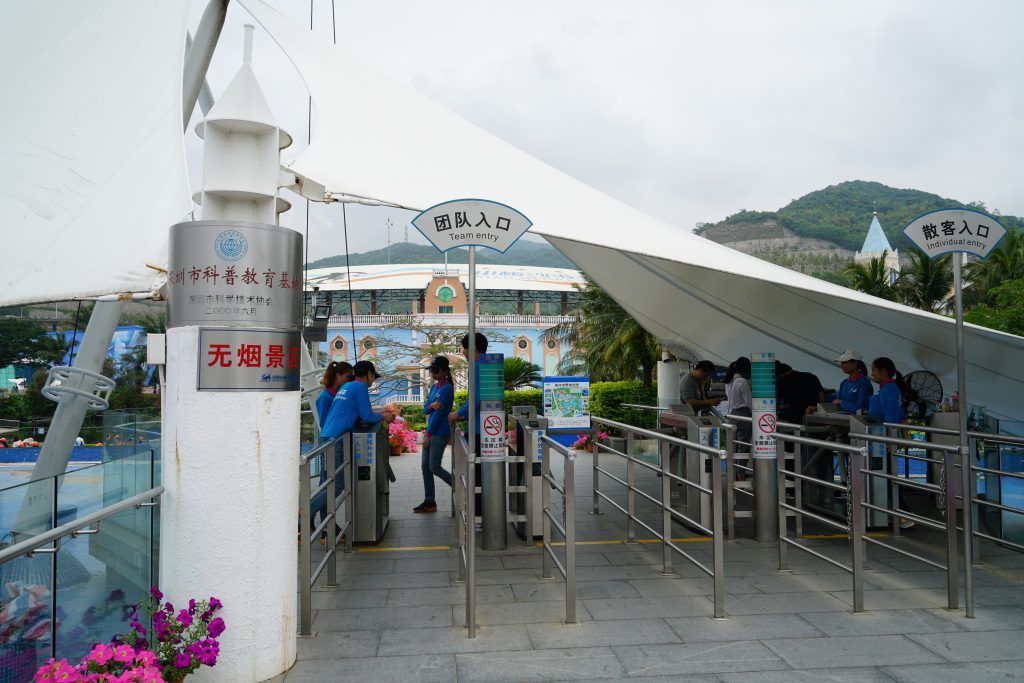 Our previous data noted that there were three belugas; however, during this trip only two were seen.  But a news article in December 2016 stated two beluga whales were transported by truck from Shenzhen to Changchun, and a staff member from Grandview also confirmed that the two belugas there were from Xiaomeisha.

The staff member’s assumption was that Xiaomeisha Sea World had more than three belugas or Xiaomeisha had ordered more belugas before Russia temporarily suspended beluga capture and trade, so Xiaomeisha rented two belugas to Changchun.

The two belugas we saw at Xiaomeisha live in the beluga theatre and perform three times a day. The show is underwater ballet with the trainers scuba diving in the tank. One trainer put part of his regulator into a beluga’s mouth and the beluga then released out a bubble ring using its lips. From the narration both of the belugas are females between eight and nine years of age. The water looked green, possibly because of algae, and the belugas’ eyes were not always open. Very little interaction was noted between the two whales. One beluga has a grey mark on the chest – our investigator could not tell if this was a birthmark or bruise. The tank was empty and had no enrichment at all. The narration had no educational content and neither did the signs. 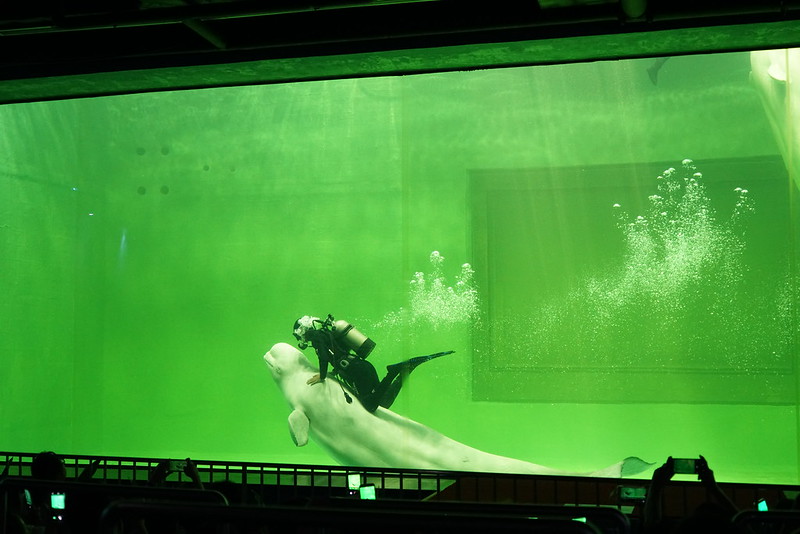 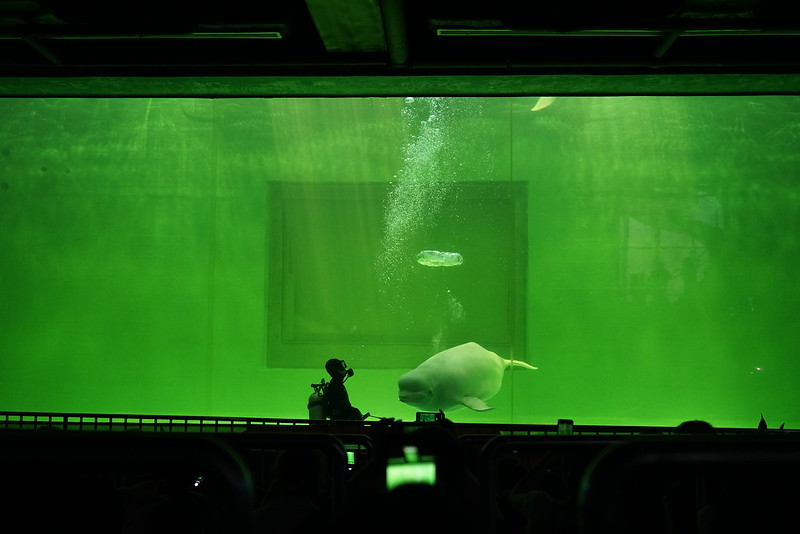 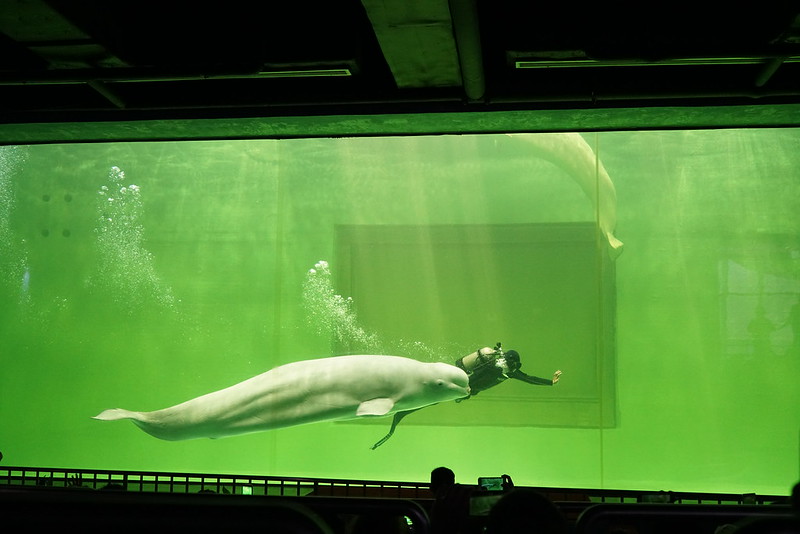 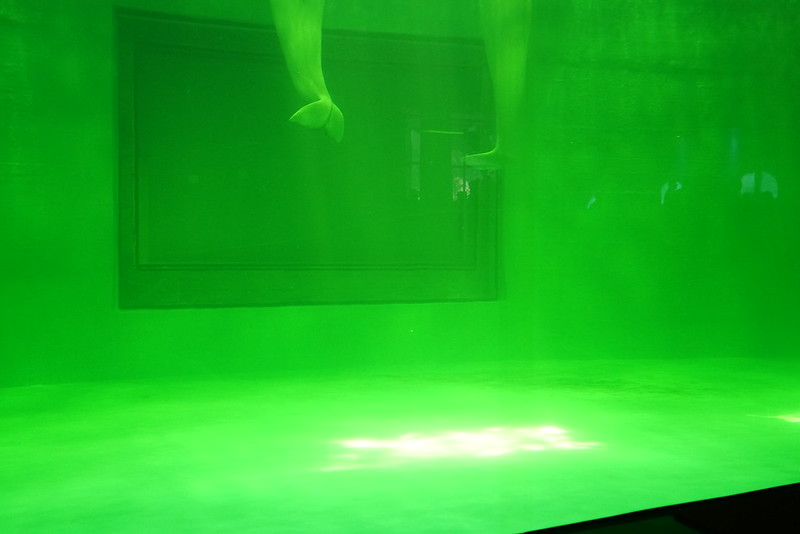 CCA previously noted that there were five dolphins but only four were seen on this visit, two in the performance and another two in the holding tank. People can only see the dolphins during the performance. The theatre had 3000 seats and they were all taken during our visit. The show was loud and made of three parts: a team of Ukrainian acrobats performed high dive and clown tricks first, then one sea lion played ball and while balancing on its hind flippers, rotated rapidly in a circle swung in fast speed. The dolphins were the last part. The audience laughed most about the high divers and the clowns. 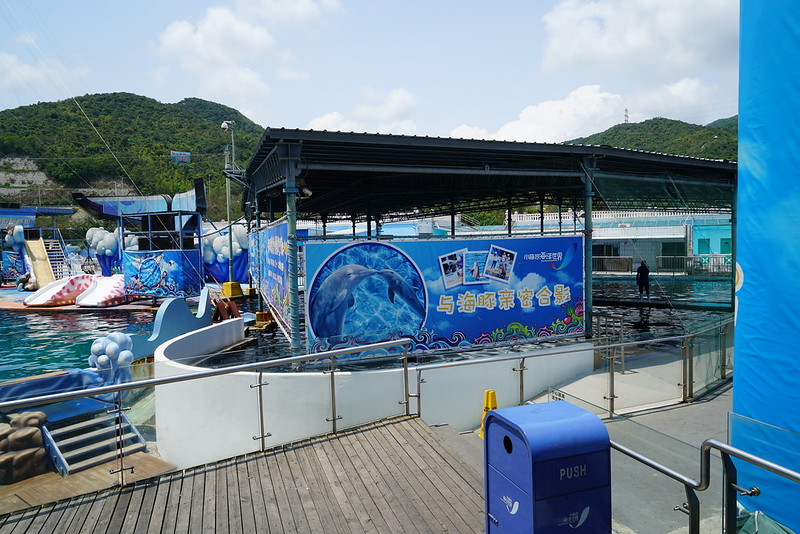 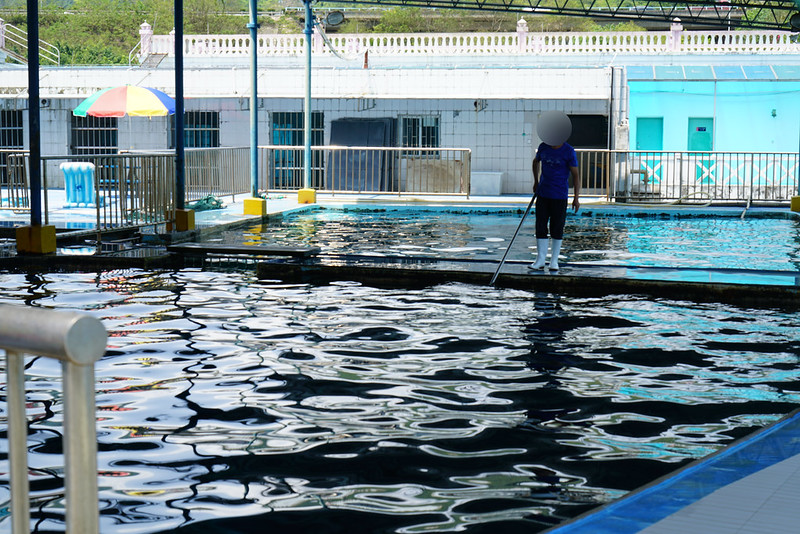 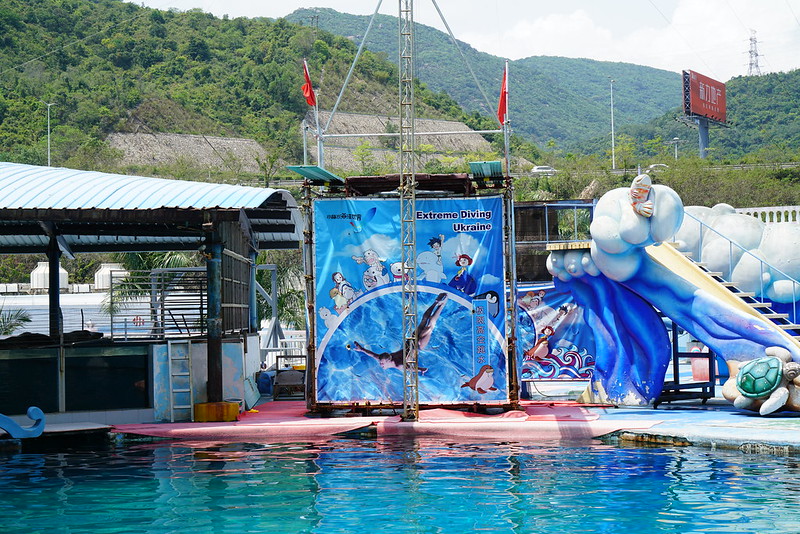 Five seals were lying on a deck with a tank behind them; we suspect they were used in a public feeding program. Advertising in the venue suggested people can pay to take a photo with the dolphins.  The dolphin theatre is outdoors; the performance tank does not have any roof and the holding tank only has a thin plastic sheet over head. Amplifiers were overhead, meaning the animals can hear the loud noise whenever their heads are above water. The paint of the tank wall was chipping off and the gates were rusty. 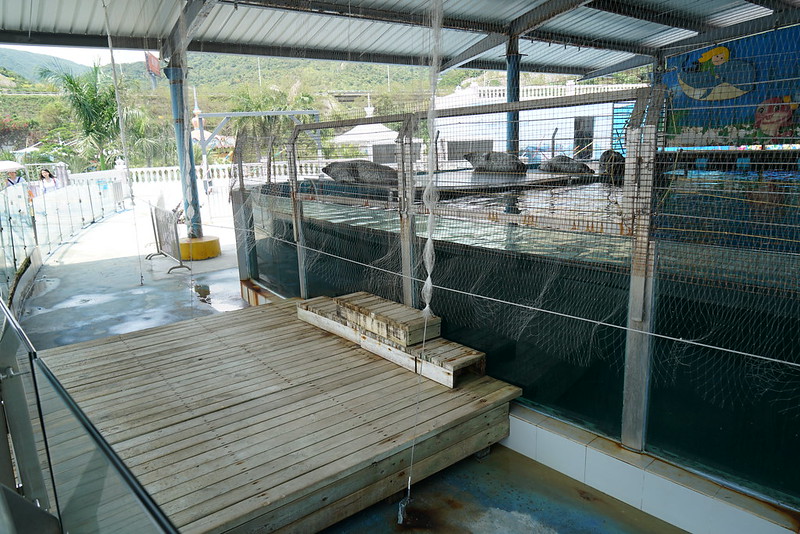 Four dolphins waited in the holding tank and only had access to the bigger performing tank during the show. Before the dolphins entered the performing tank, our investigator observed them for 10 minutes and noted they seemed to be calmer before the show. The dolphins played catch with balls and rings and jumped up to touch a ball hanging over the water. Trainers stood on their snouts and did a water ballet. The host mentioned during the show that the dolphins were from the Indian Ocean. 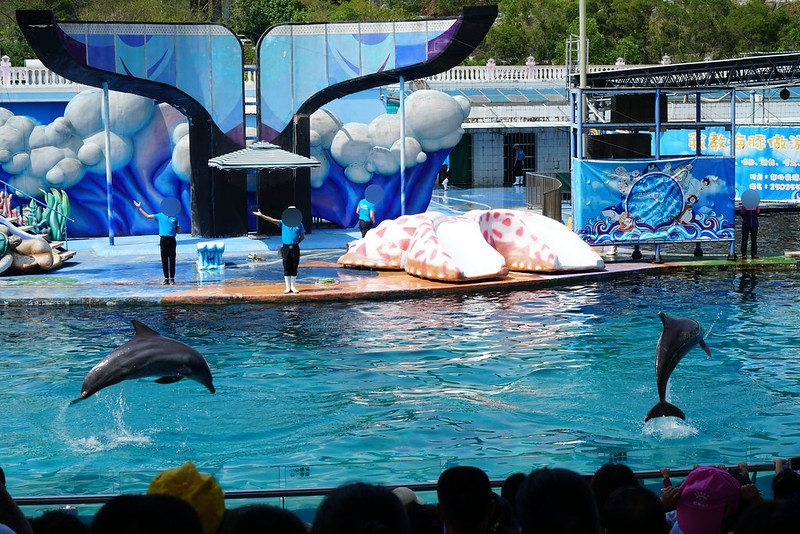 We saw two walruses in an empty tank. A trainer was in the enclosure with them rubbing and patting them, trying to make them move in what seemed like a training session. Later the trainer went on to the deck and threw some snowy ice onto them. The bottom of the enclosure had pipes and the walruses were lying on them. Both of the walruses had some bald patches on their bodies but we couldn’t tell if they are skin lesions due to a health condition or injury. 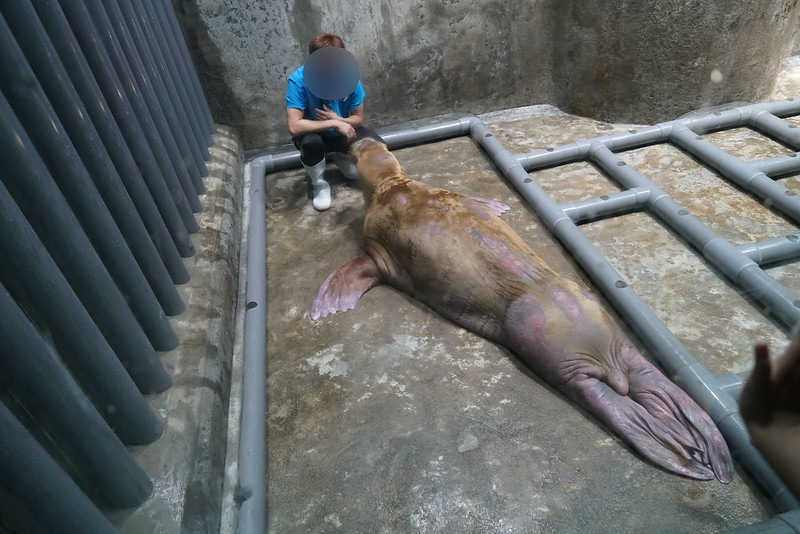 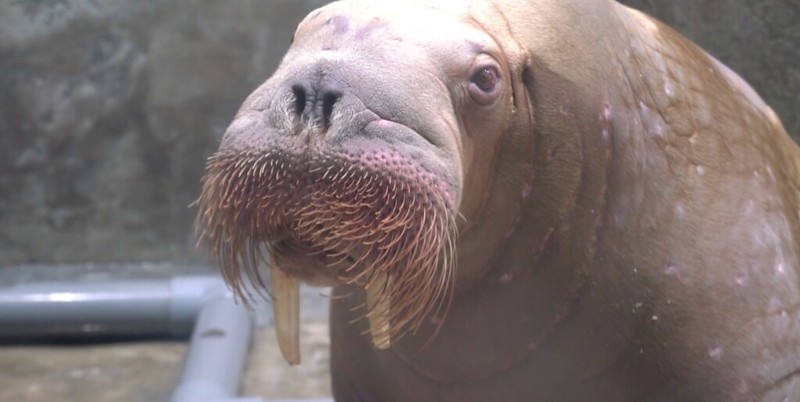 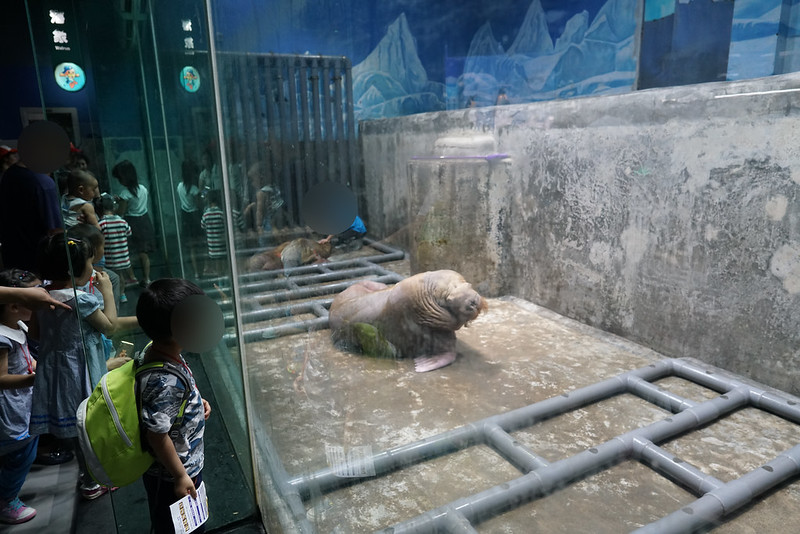 There was an indoor enclosure with approximately 10 sea lions. Another one performed before the dolphins. There was no enrichment, but lots of debris was seen at the bottom of the tank. 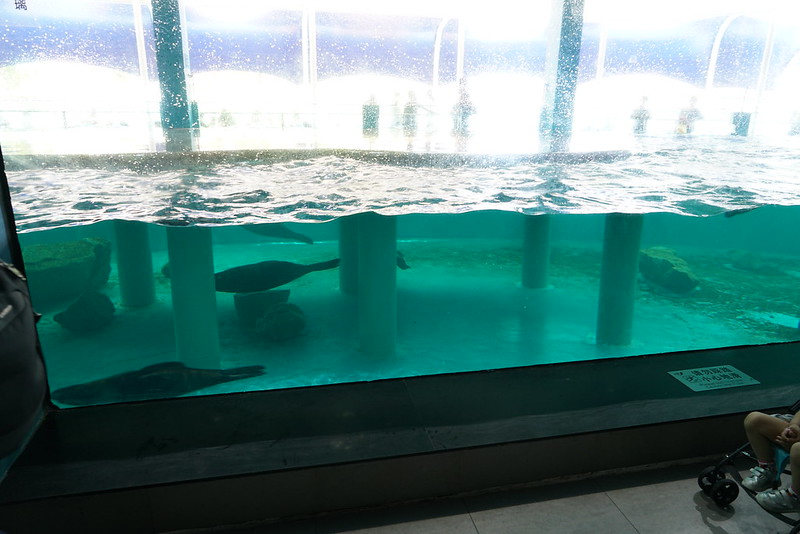 Five seals were lying on a deck in the dolphin theatre for visitors to pay to take photos with them. 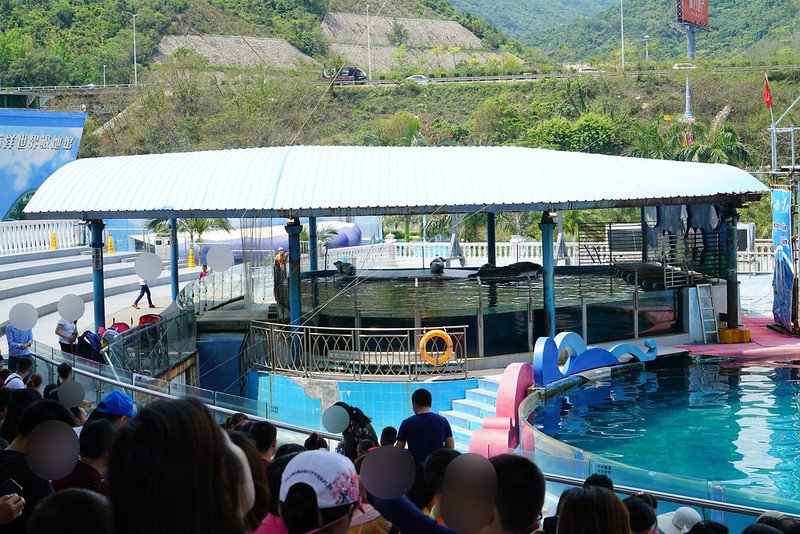 One polar bear was in the indoor enclosure. When we searched for info about Xiaomeisha online we learned the bear was named Pezoo and apparently arrived at the facility in 2013 after being bred in captivity. This name sounds similar to the one in Tianjin, which acted in a Canadian film. We suspect Tianjin Haichang bred several bears and named them all Pezoo, so laypeople could not tell them apart. The gate to the bear enclosure was rusty and the paint was chipped off and there was no enrichment. 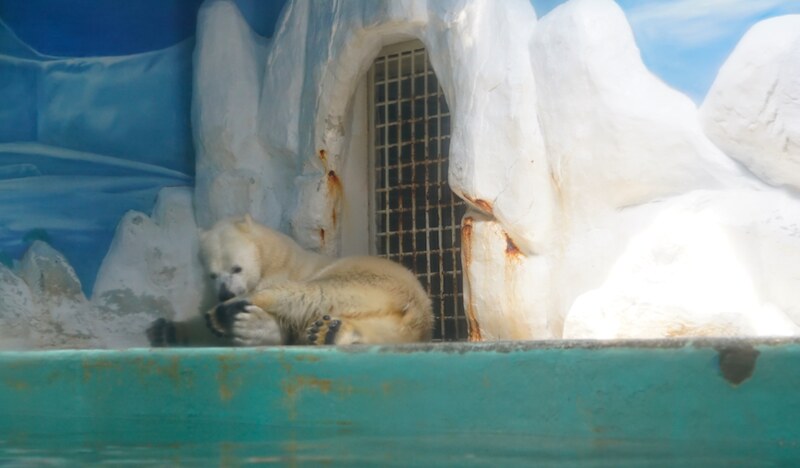 There were four arctic wolves in total but only two were in the indoor enclosure, with another two in a semi-outdoor ferret enclosure! A notice on the glass said this was due to the ferret quarantine… The wolves there smelt terrible, pacing constantly and looking desperate. 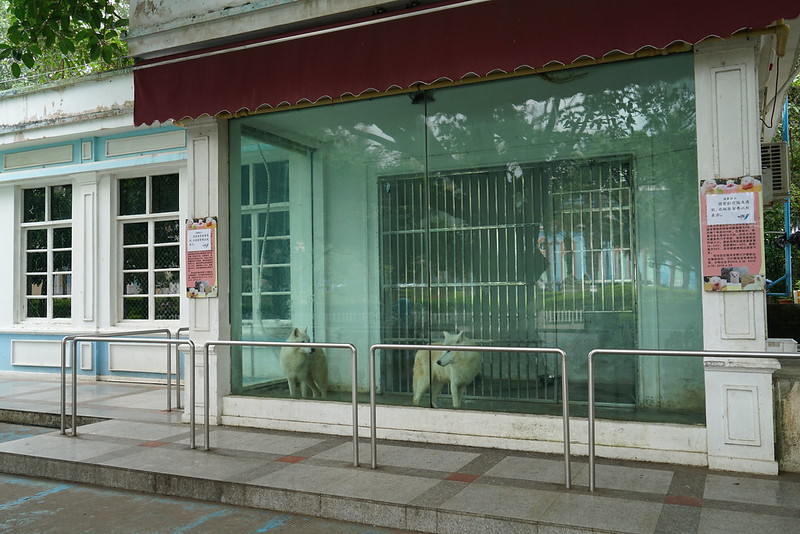 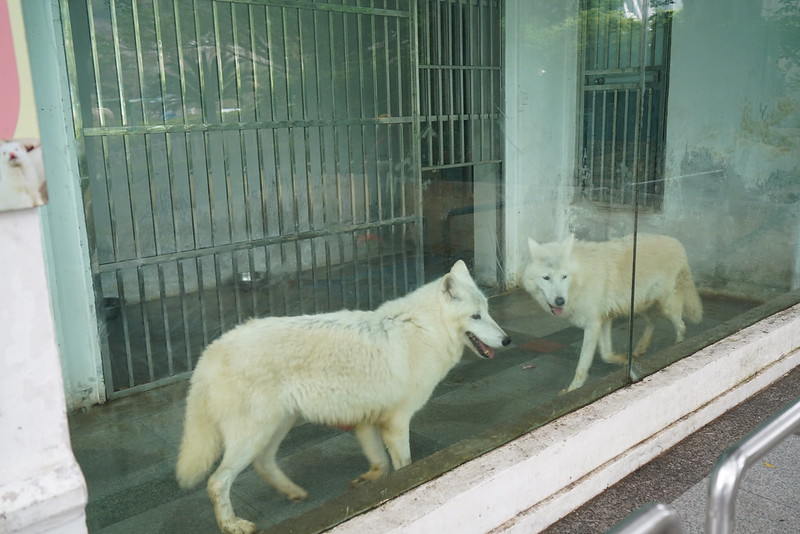 Five arctic foxes were in a small indoor enclosure with no enrichment. 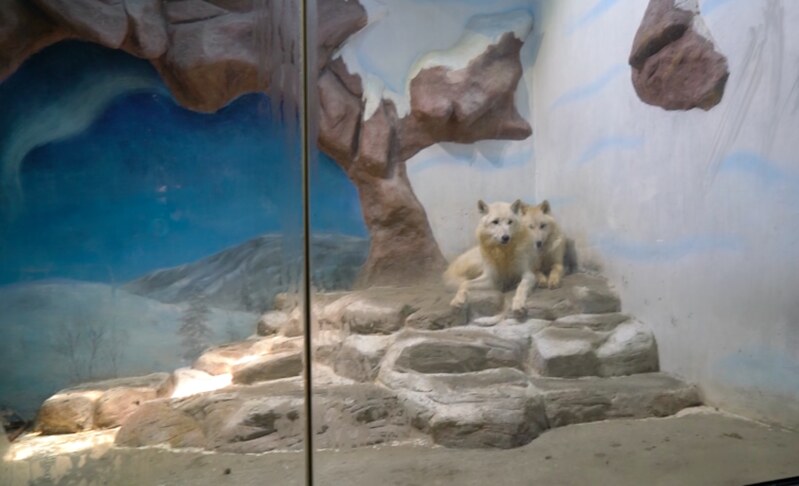 A few Tibetan mastiffs were in a small semi-outdoor enclosure. The smell was bad and the dogs were hiding in the back area from the sun. 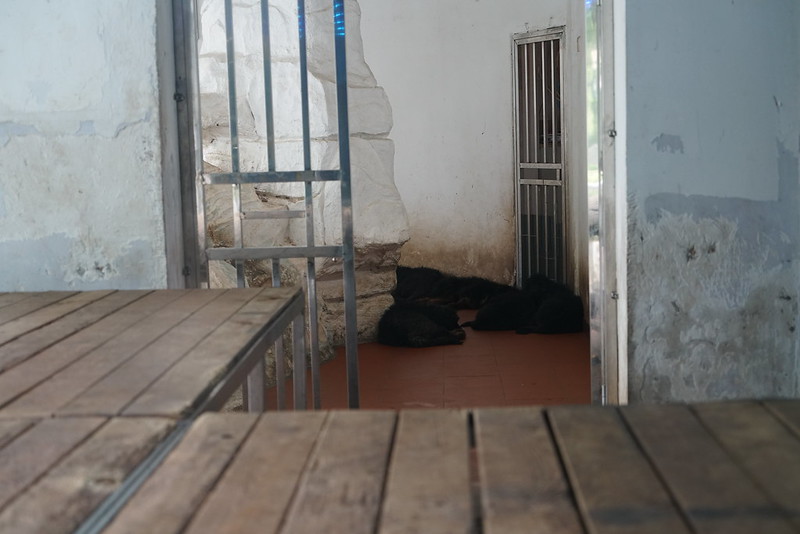 Xiaomeisha Sea World has a whale shark specimen. From the sign, the whale shark was transported by a Panamanian cargo ship from the open sea to the facility in May 2000. The facility displayed it to the public under order from the Shenzhen government. The specimen and various other specimens on display appeared in bad condition. 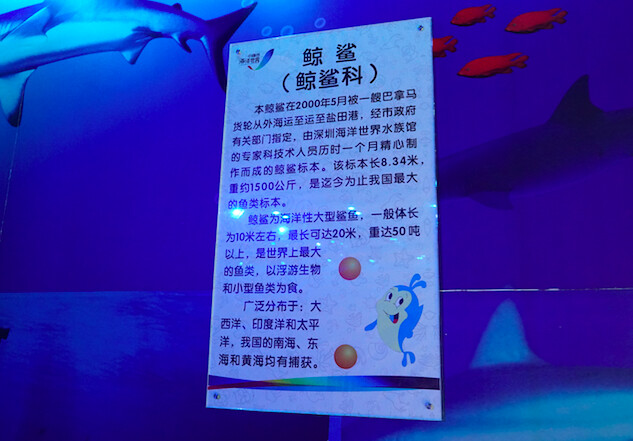 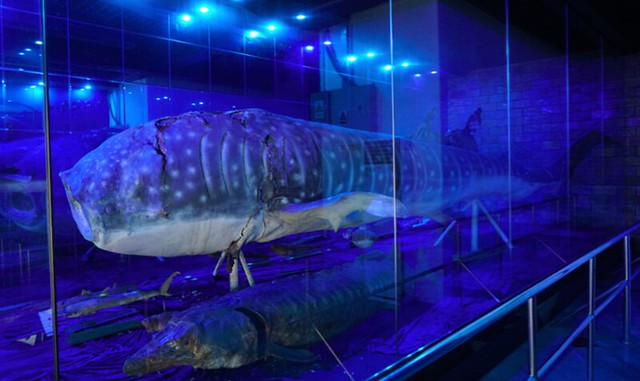