Chimelong Ocean Kingdom revealed on February 24 that it has nine orcas Chimelong orca breeding center Wechat piece, captured in Russia’s Sea of Okhotsk. These whales were imported in 2013, 2014, and 2015. Chimelong intends to use these whales in a breeding program.

The only ecotype observed by Russian researchers in the area of capture is the mammal-eating ecotype. It appears, from reports at the holding facility in the far east of Russia, that these animals, despite their young ages, were taking solid food at the time of capture (when they were first observed to defecate after capture, there was fur in the feces), meaning they had witnessed and possibly even participated in live mammal hunts, most likely for pinnipeds.

The China Cetacean Alliance wishes to express strong concern about the welfare of these whales and the safety of their trainers.

Regarding the orcas’ welfare，these are mammal-eaters, yet Chimelong will feed them only fish, which is not biologically appropriate. Their health may suffer from eating food to which they are not behaviorally, physiologically, or genetically adapted.

Chimelong suggests in its media announcement that these orcas range in age from 5 to 13 years of age. There is no way to confirm these age estimates, but the whales seem smaller in the photographs than the claims by Chimelong (400 cm to 650 cm). Even if Chimelong’s age estimates are accurate, this still means the whales were very young when captured (perhaps as young as 1-2 years of age!). Given their youth, they are likely socially abnormal already, as they were taken from their mother while still strongly emotionally dependent on her and have no matriarch to teach them normal social behavior.

Their youth also means that starting a breeding program is premature. Most of these whales are juveniles, not adults. And while some of the older females and males may be sexually mature, that is NOTthe same as being socially mature in orcas. That’s like saying a young girl of 11 or 12 years of age is ready to be a mother! Female orcas might be sexually mature at 6-7 years of age, but don’t give birth for the first time until they are 12-14 and males are not socially mature until they are in their late teens or early 20s! Western orca facilities have always bred their orcas too young – this is a likely factor in their shorter life spans. It would be unfortunate if Chimelong repeated this mistake.

As for the sex ratio of the group – 5 males, 4 females – this is highly likely to result in social problems. In most orca populations, males are subordinate to females and when there are a lot of males in the group, the group itself becomes somewhat marginalized from the larger population (males can be disruptive, apparently – so in general families with more females than males avoid families with more males than females when they are socializing). Chimelong’s male-skewed sex ratio, even if the group is split into two enclosures, is not a good idea in captivity – aggression levels could get very high, both among the group and with trainers.

Chimelong says that the orcas are being held in two groups “based on the 2 social groups they are from.” This does not mean much, as little is known about the social groups in the Sea of Okhotsk, especially among the mammal-eating whales. Identifying social groups (pods) is simply not possible there yet, with the current database. Even if Chimelong’s claim is because the capture operators removed these animals from two different groups at capture, this doesn’t mean these were two different social groups (they might have been all mixed up, socializing, hunting, or whatever – but they were not necessarily in family pods at the time of capture).

This means that all of these orcas MIGHT actually be related to one another (as in brothers, sisters, first cousins, etc.). If so, breeding them would be a huge problem. No one at Chimelong can know how these orcas are related to one another, unless they have conducted some detailed genetic tests. Given the lack of a socially experienced, adult matriarch to raise this group of young whales, incest is a very real possibility. Orcas do not mate within families, yet they live in family groups. They are socialized by experienced adults not to commit incest (to seek mates from outside the family group), but these young whales have no experienced adult to socialize them properly.

In addition, one of the high-resolution photographs provided by Chimelong in its media announcement from February 24 shows an orca with a skin condition (the yellowish blotches on the white area of the chin). 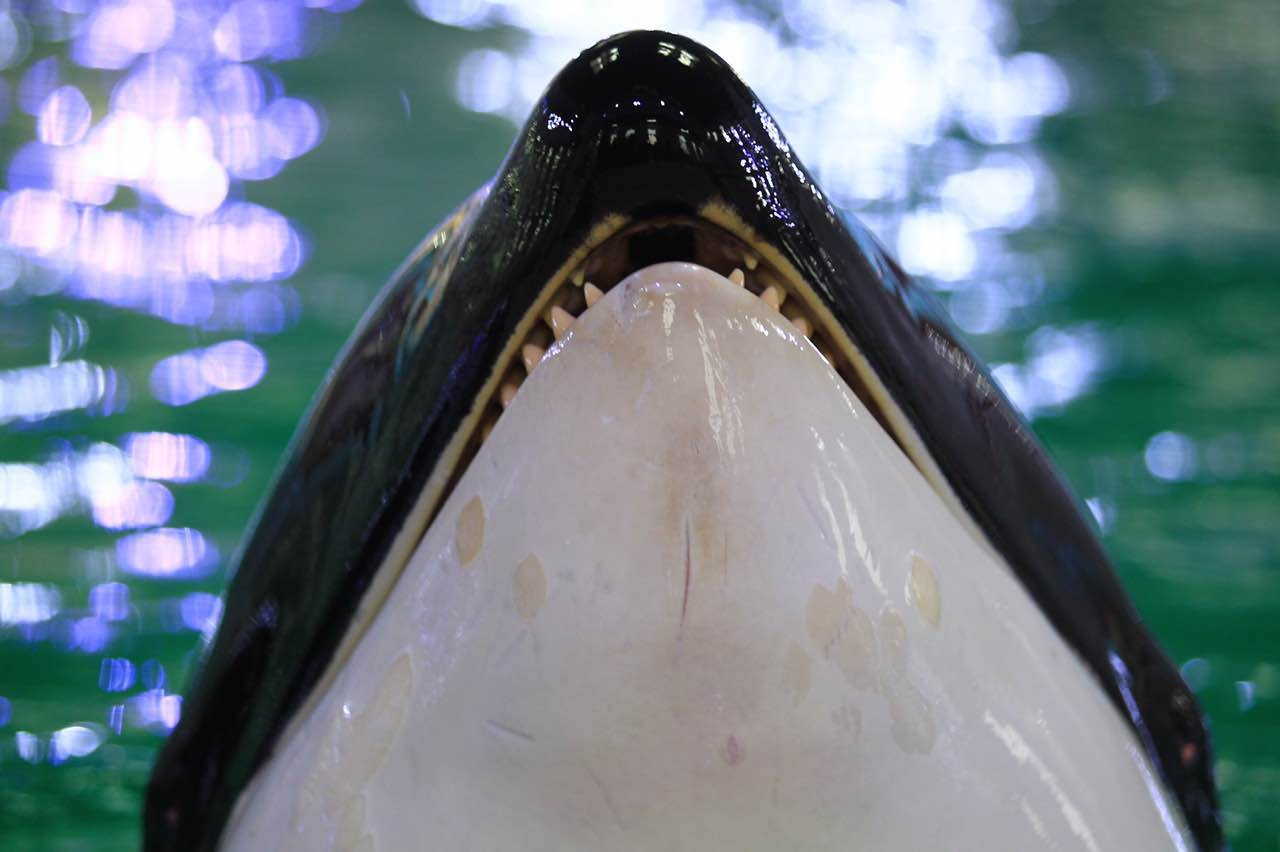 We consulted with a marine mammal veterinarian, who says that these blotches look like a fungal infection; it could also be bacterial. Regardless, it is not normal and should be medically addressed. It suggests the water quality in Chimelong’s orca facility is inadequate and/or that the orca has a depressed immune system.

Regarding trainer safety, we repeat again that these are mammal-eating orcas. Their reactions to the trainers, especially if one should accidentally fall into the water, could easily revert to hunting behavior.

CCA is concerned by two things in the Chimelong orca breeding center YouTube video and some of the photographs:

1) We see at least six of the nine animals lined up along the pool wall at once, with little coordination among the trainers. This is “controlled chaos,” excessively dangerous conditions when handling young orcas. These conditions in fact encourage the animals to improvise their responses to any trainer commands and to go “off behavior,” which is a situation where accidents and/or aggression become more likely.

2) the trainers are in close proximity to the whales, with no barriers, no distance, and no impediment to the whales if they wish to lunge forward and grab a trainer and pull him or her in (this is a natural tendency in any mammal-eating orca). The trainers are treating these mammal-eating orcas as if they are bottlenose dolphins or belugas. This is a serious mistake from a safety perspective.

We once again express very serious concerns about the situation at Chimelong. The welfare of these nine whales is threatened by the conditions under which they are being held and the safety of the trainers is at significant risk.​