The Wuyishan Tianhong Polar Ocean World only opened in July 2016 but already looks old and run down. It has been built for selling the surrounding real estate programs. Wuyishan is a small city in the mountainous area of Fujian province. This facility only gets large numbers of visitors in the summer and winter holidays. The business on weekends is average according to staff.  Our investigators visited on a Monday and there was only one family visiting at the same time. 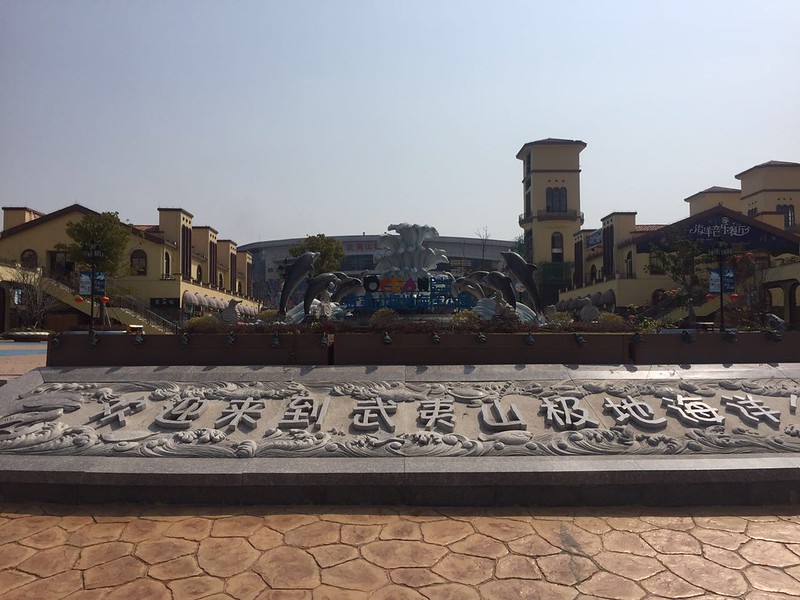 There were two belugas whales, one greyer than the other. We were previously unaware there were belugas in the facility. Due to the low number of visitors the belugas did not perform. When we came back to the the beluga tank after the dolphin show the older whale was in the performing tank which couldn’t be seen from the viewing area. When the beluga whales were in the same exhibit tank we were unable to tell if they got on well or not. We did observe the younger one spraying water at the older one. Both of them had cataracts. 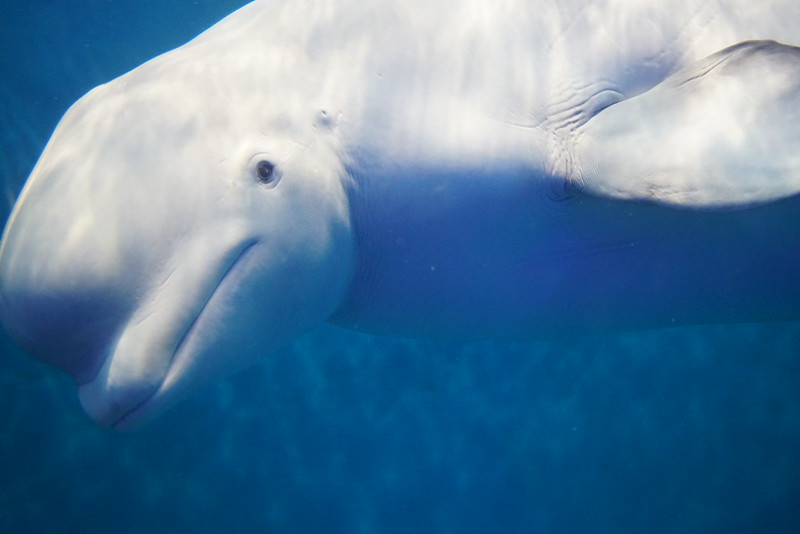 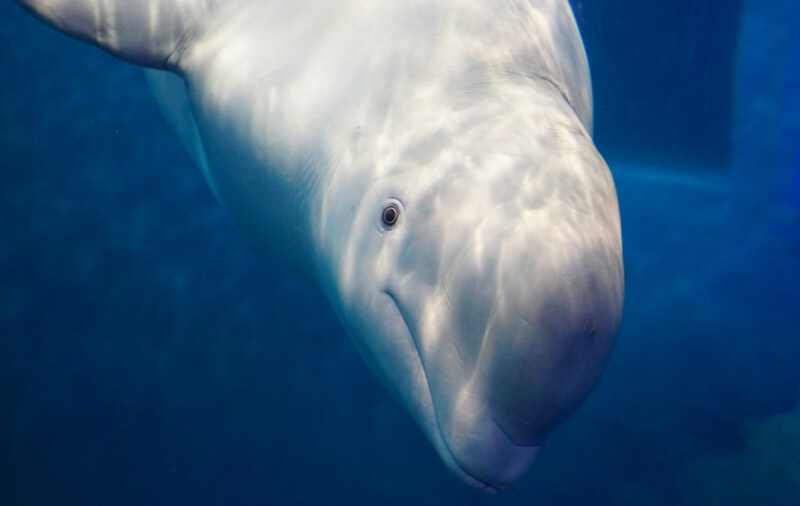 The younger one was showing mouth opening behaviour, which could be a threat. As you can see in the photo of this whales teeth one of its right molars has a black mark, possibly a sign of decayed teeth. The tank had no enrichment and there was peeling paint and other debris inside it. 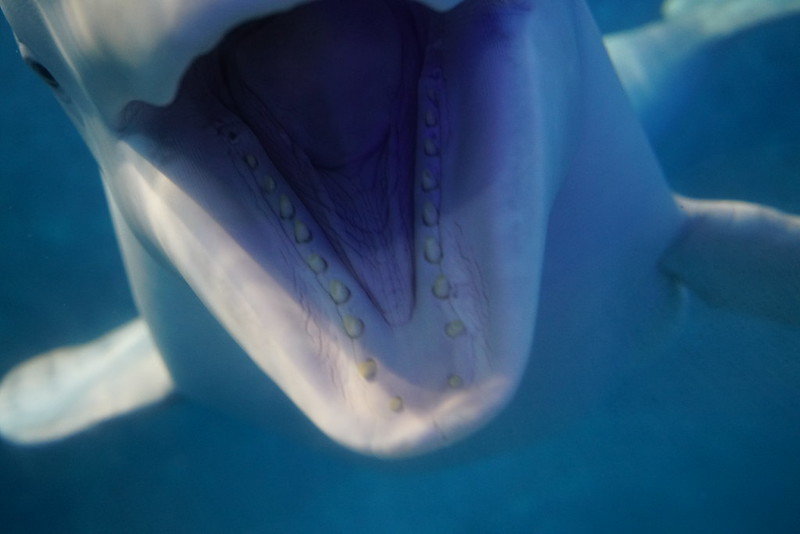 The cylindrical captive tank where the beluga whales were housed was very small and both beluga whales were locked up here most of the day.  There was no enrichment in the tank, but there are visible debris in the water and peeling paint. The debris of the paint may be toxic and inadvertently eaten by animals. 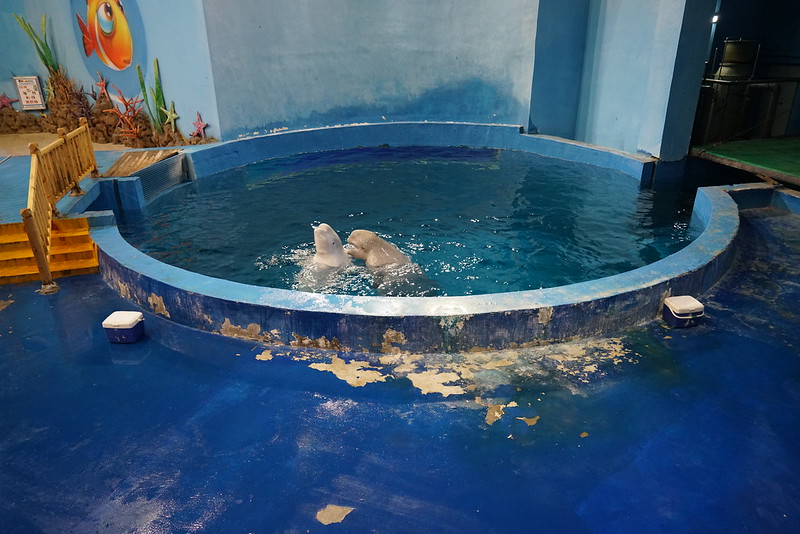 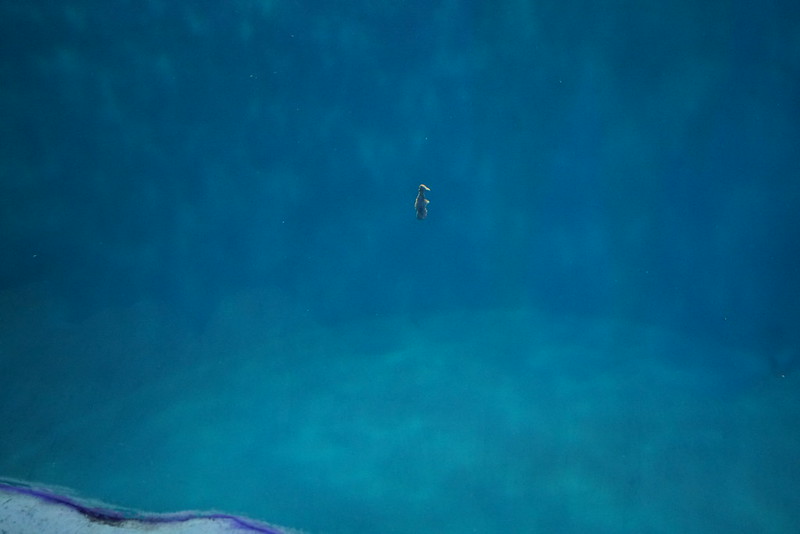 There were four bottlenose dolphins in two adjacent round holding tanks. Dolphins could only be seen by the public during the performance. We recorded that there were eight bottlenose dolphins at the facility. When our investigators asked staff about the total number of dolphins kept there, they told us they were all in the tank. They perform in pairs with each pair performing once per day. The holding tanks were very small and totally inadequate for such large animals. Before the show one dolphin was very excited and was jumping out of the water a lot while the other three stayed submerged. 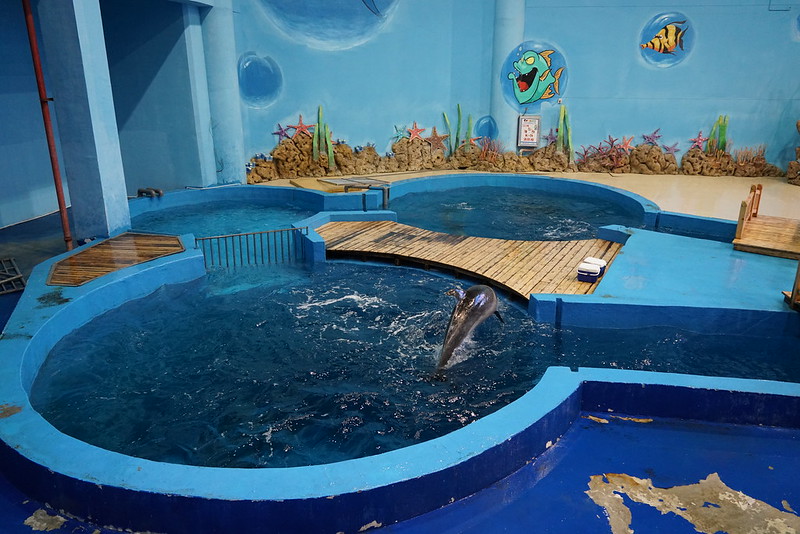 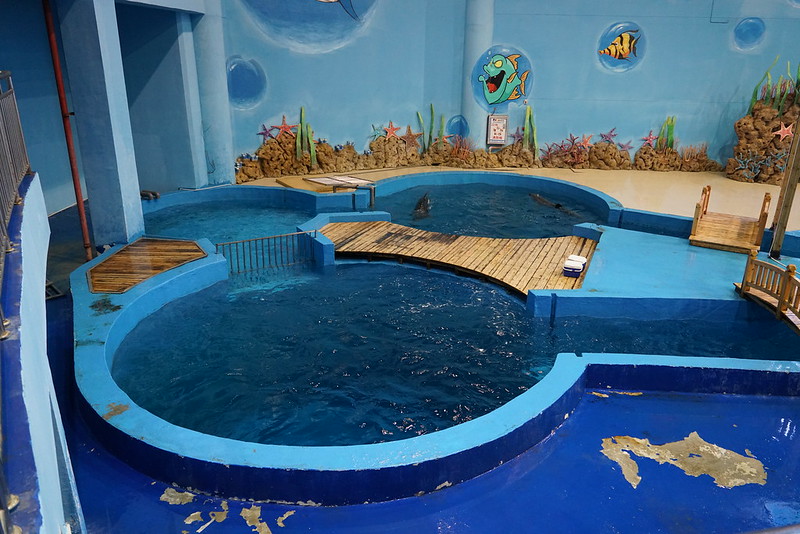 The big screen showed a video at the beginning which had some shots of trainers making toys for the dolphins. However, we saw no toys or other enrichment in the tanks. The music was loud and the host encouraged the audience of no more than 10 people to clap and hooray as loud as possible. Visitors could pay to take photos with dolphins. The host didn’t invite anyone to come onto stage to get close to the dolphins as is often the case in these shows. The performance was typical for a facility such as this; playing with balls and hula hoops, jumping out of the water, doing water ballet with the trainers, etc. The dolphins were returned back to the holding tanks as soon as the performance was over, and the older beluga was let into the big performance tank and kept there. We didn’t see it before we left, and did not have the chance chance to observe the dolphins close-up. 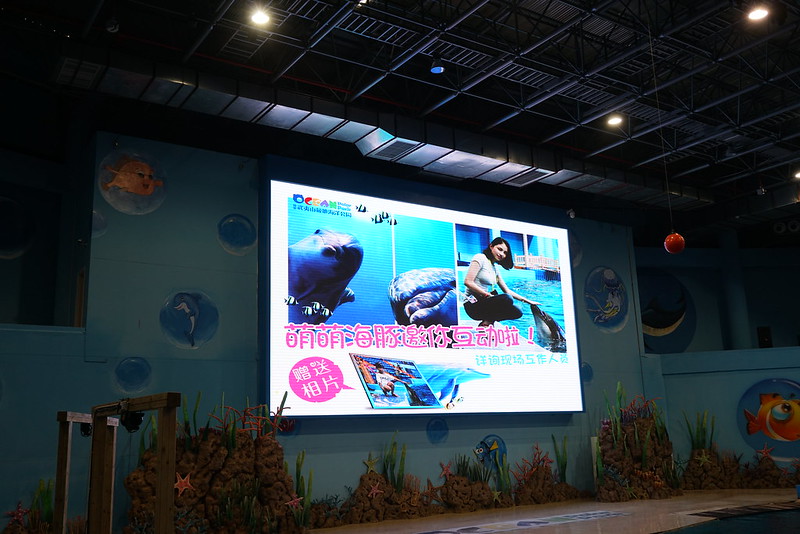 There were two arctic wolves living in an enclosure with a transparent panel roof in the corner. Fujian can be very hot in the spring and summer. One wolf stayed in the shaded part. The other wolf had what looked like a deformed right forelimb. 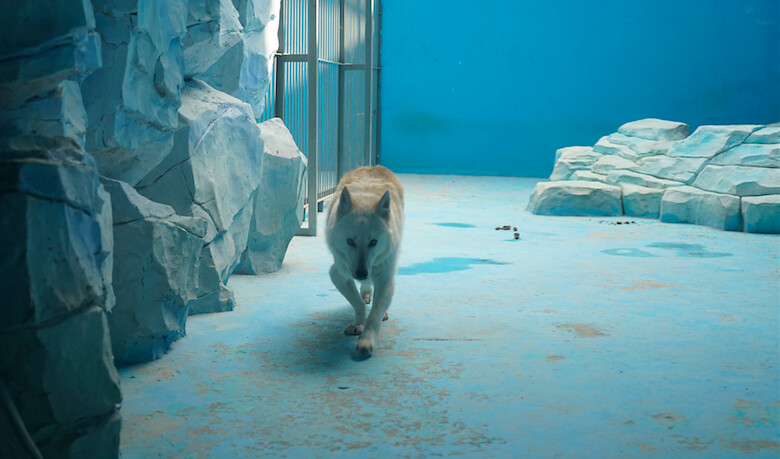 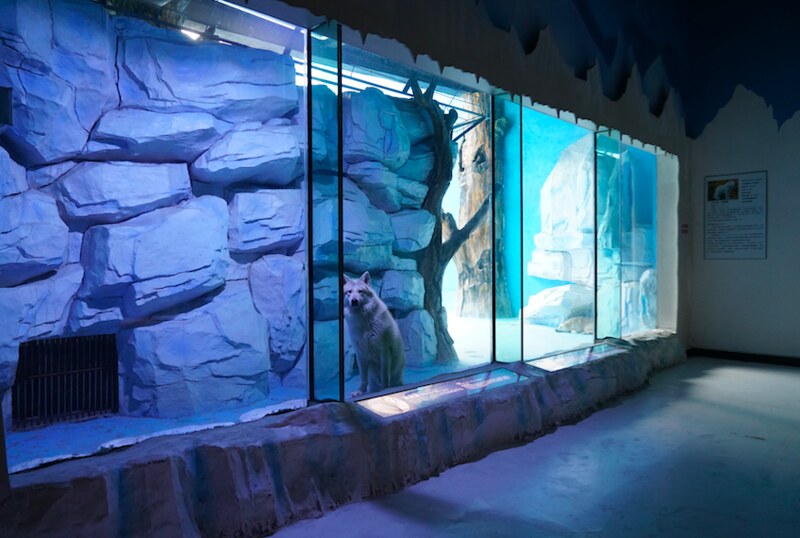 There was an arctic fox living in an enclosure with a transparent roof. It seemed to be dirty but there was no mud in the enclosure. 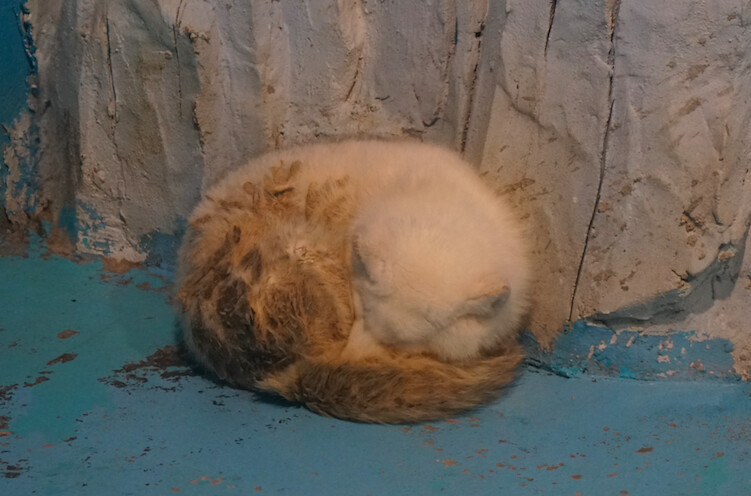 There was an empty enclosure with a ‘Polar Bear’ sign displayed on it but the staff member told us that the bear was sent to “some other facility”.

There were also two seals with a suspicious skin condition in one tank and more seals in another extremely muddy tank but we could not count the total number. 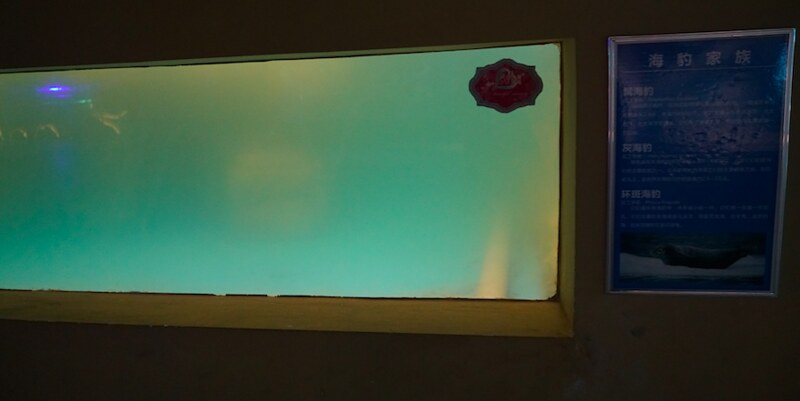 There was one sealion which stayed submerged in its tank where the floor was covered in debris. 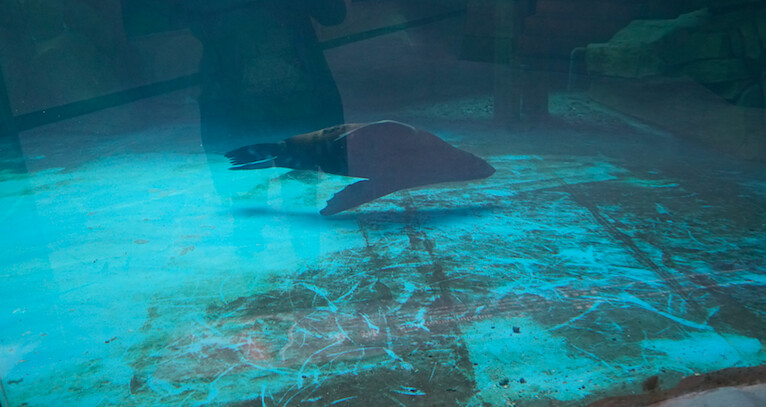 Five African penguins lived together with a tank in their enclosure. 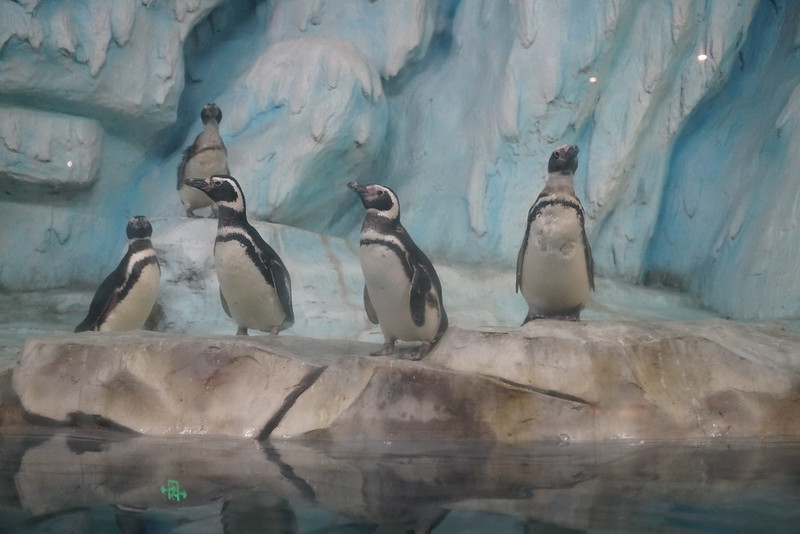