Fenjiezhou Island is a small island located in the southeast of Hainan province; it is a AAAAA rated scenic area, the highest ranked destination in China. This island provides water sports and accommodation as well as highlighting the “chance to dive with and feed wild sea creatures including whale sharks” and a “dolphin show in nature”. The animals are kept in a sea pen area named Oceanic Cultural Palace, which we believe opened in 2013.

The Oceanic Cultural Palace is the only sea pen holding cetaceans for display in China. We first learned about it from an online advertisement showing people diving with dolphins and whale sharks, with the tourists being allowed to touch the animals. The Oceanic Cultural Palace consists of a performance zone and many small sea pens holding the cetaceans and other animals between shows..

The dolphins in the photos appear to be pantropical spotted dolphins. Sources tell us there is an aquatic wildlife rescue centre called Hainan South China Sea Wild Aquatic Animal Rescue Center in Fenjiezhou, which has the same address as Fenjiezhou Island Ocean Park.  We received anonymous information that Grandview Aquarium obtained its whale shark from this rescue centre and that fisherman had been hired to capture it. When our investigators tried to contact the rescue center, they could not identify a phone number or address for such a place. 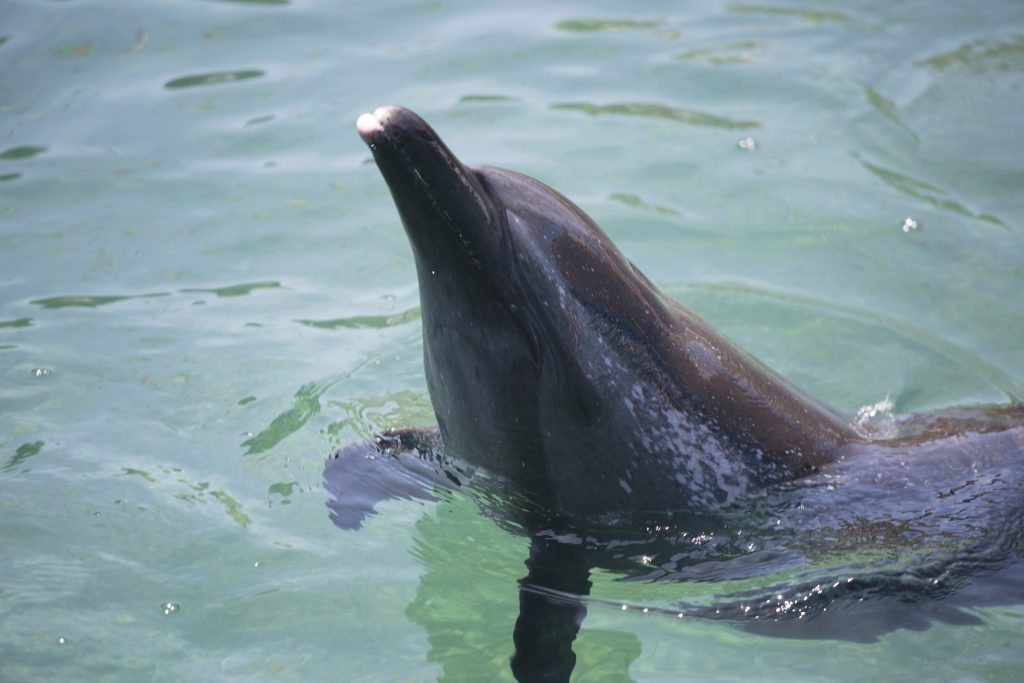 According to staff there are more than 20 pantropical dolphins at the facility, all caught from Hainan waters by fishermen. Some are caught using rescue as an excuse, but no dolphins are ever reintroduced into the wild.

Five pantropical spotted dolphins were used in the performance, which was a typical circus-style show. The narration was entertainment-oriented, focusing on the dolphin’s performing ability with no scientific or conservation content. Our investigator noted that one dolphin had a collapsed dorsal fin. The dolphins and two performing sea lions used the same performing tank and stayed in this tank for quarter of an hour following the show.

Four pantropical spotted dolphins were used in feeding and photo taking programs. A staff member told us “when they first came here, they still knew how to hunt. But now, they have adapted to eating dead fish.”

There were four pantropical spotted dolphins in another tank with no specific assignments to any programmes – they were simply on display.

Our investigators observed some keepers using a sling made of quilts to hold a dolphin. One staff member holding the dolphin confirmed that it was ill and he was upset that we were taking photos. We waited for 30 minutes but did not see a vet.

The dive with dolphins program was not available on the day we visited but a few dolphins have been used in this program previously based on the promotional advertisement we read online. 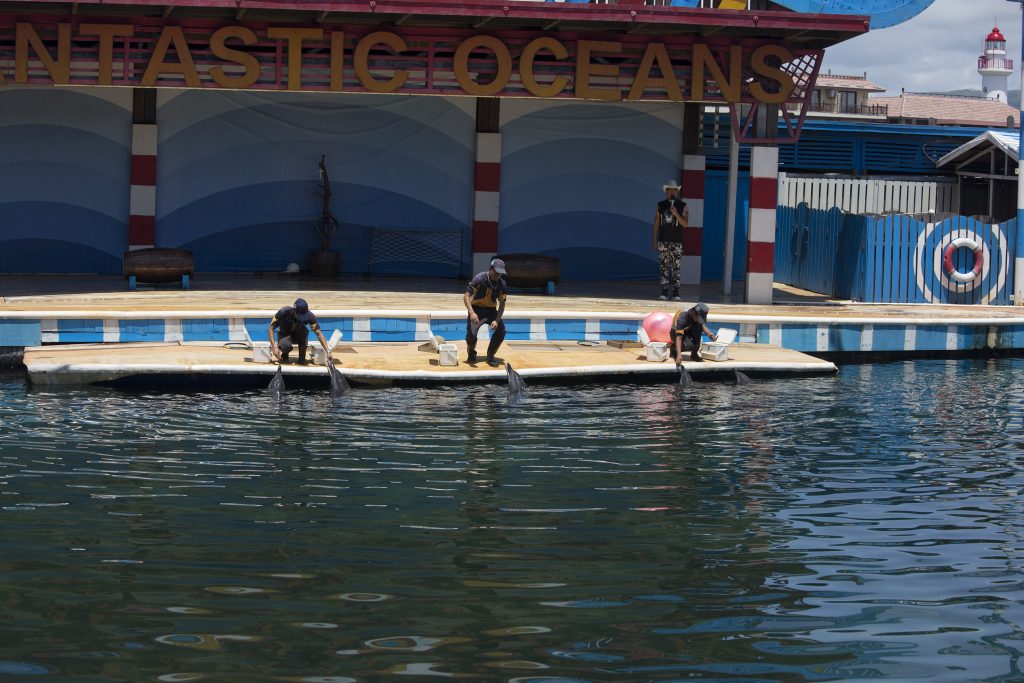 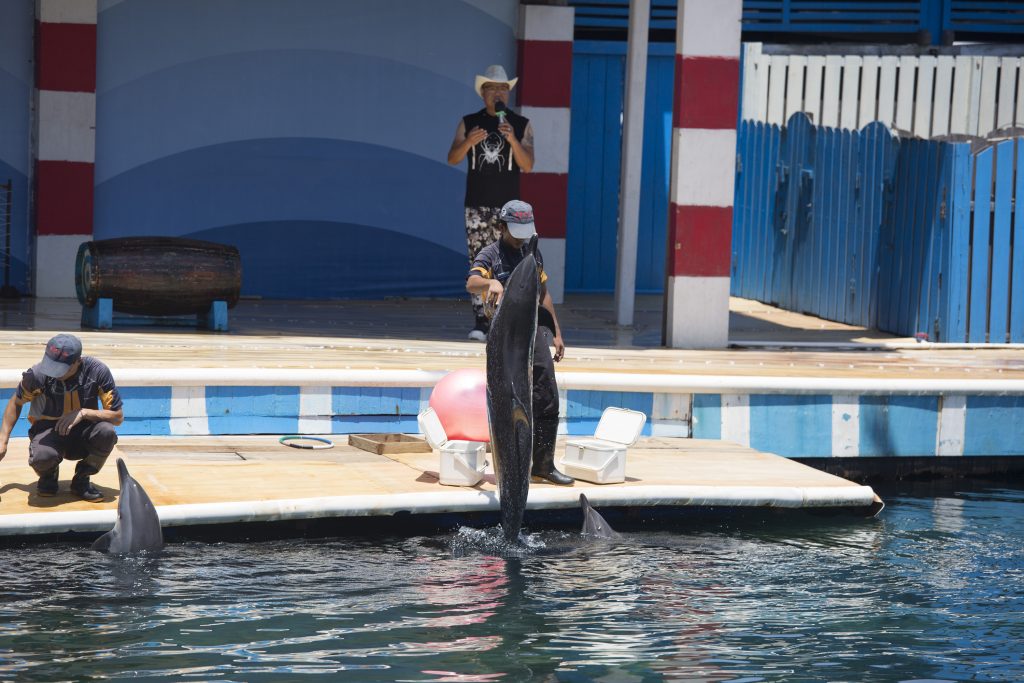 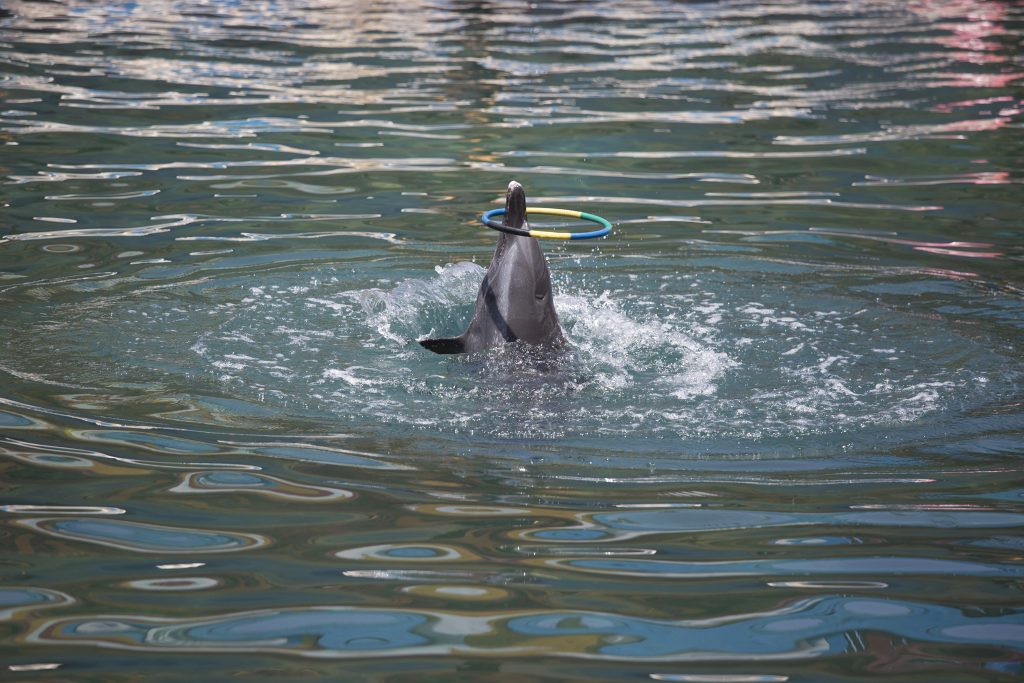 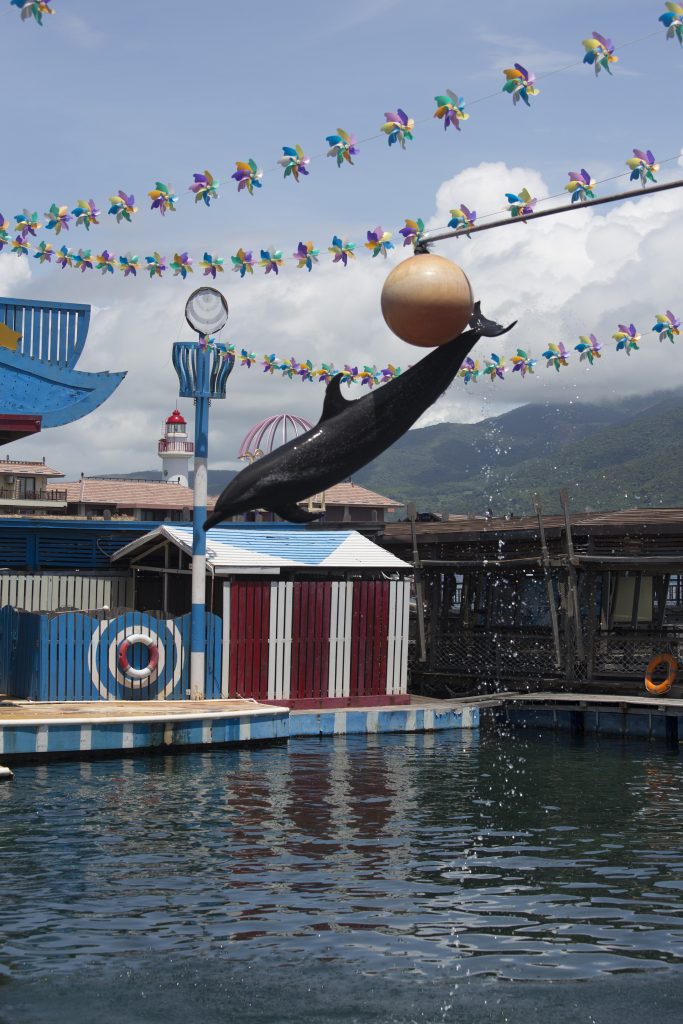 There were seven Cape fur seals bought from South Africa. Two of them are used for performing and one male was used in close interaction with the public. The other fur seals are used for feeding. 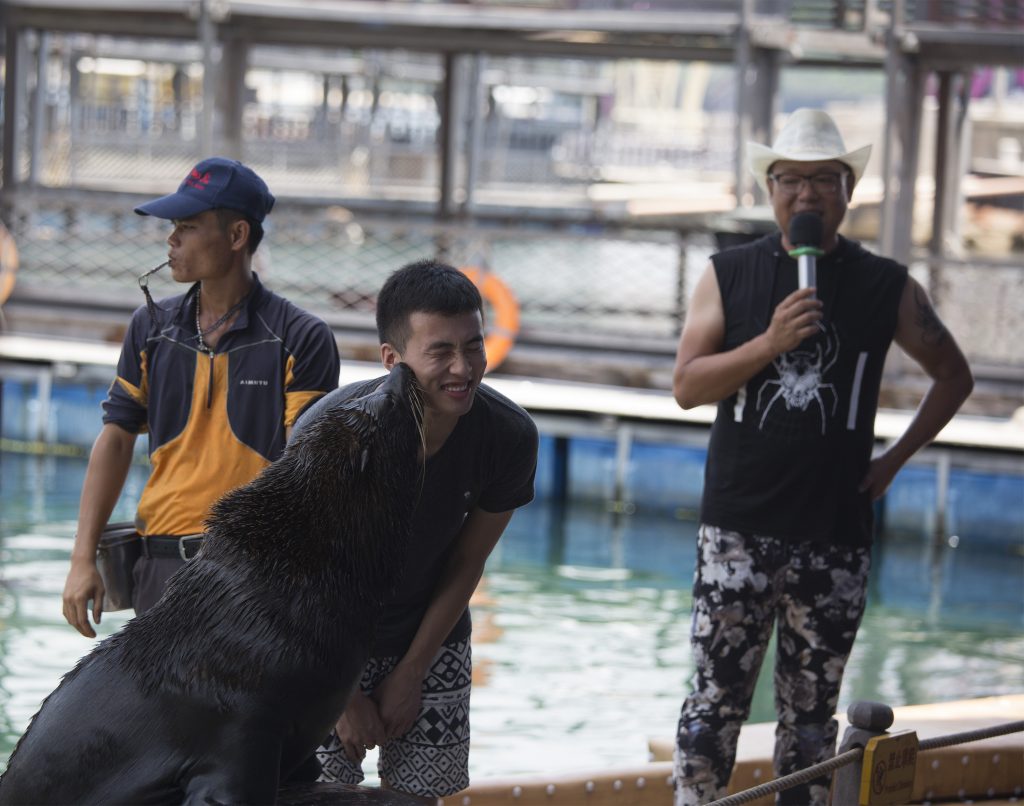 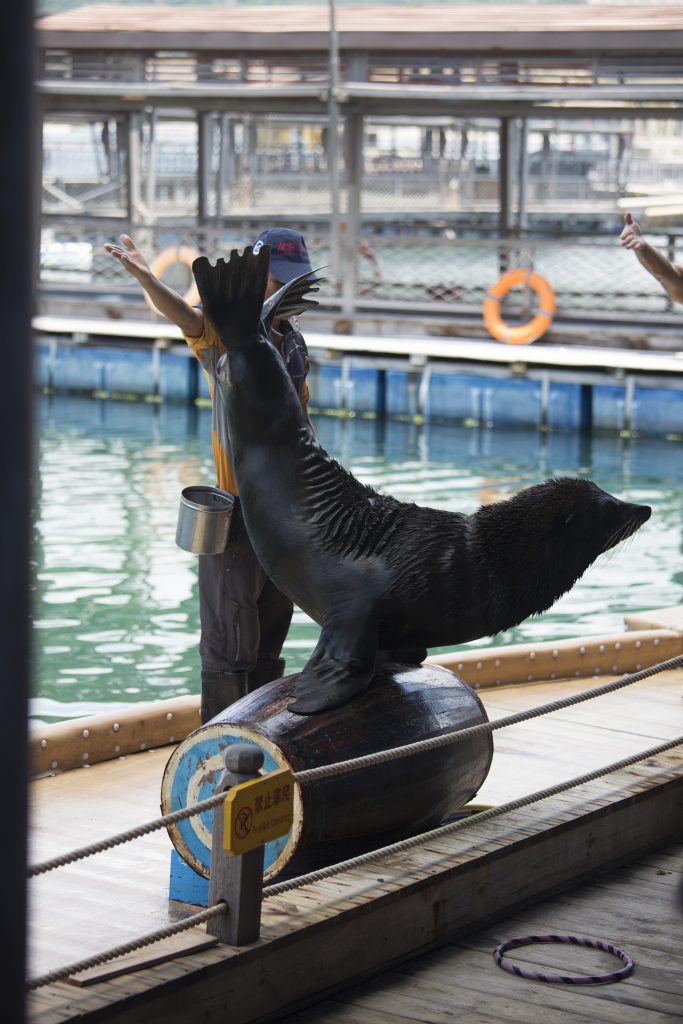 More than 30 turtles were kept in a few small sea pens. They are used in feeding programs. In the indoor exhibition there were more than 50 sea turtle specimens on display; all of them died at this facility and were taxidermied for exhibit. Staff told us that the turtles were also captured from Hainan waters and since they were kept in this sea pen style place some of them could breed.  There were a few very large turtles; these turtles were probably caught from the wild as adults, while the other, smaller turtles may have been hatched at the facility and will never be released to the wild.nOne turtle’s shell was dented, which could have possibly been caused by a net. 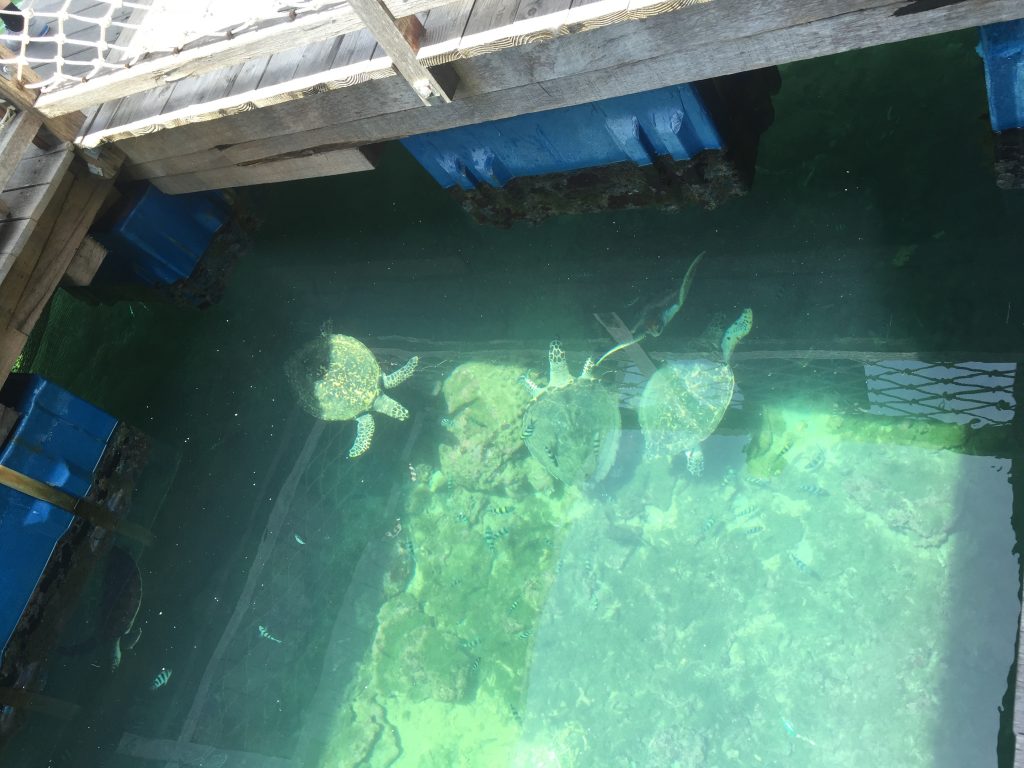 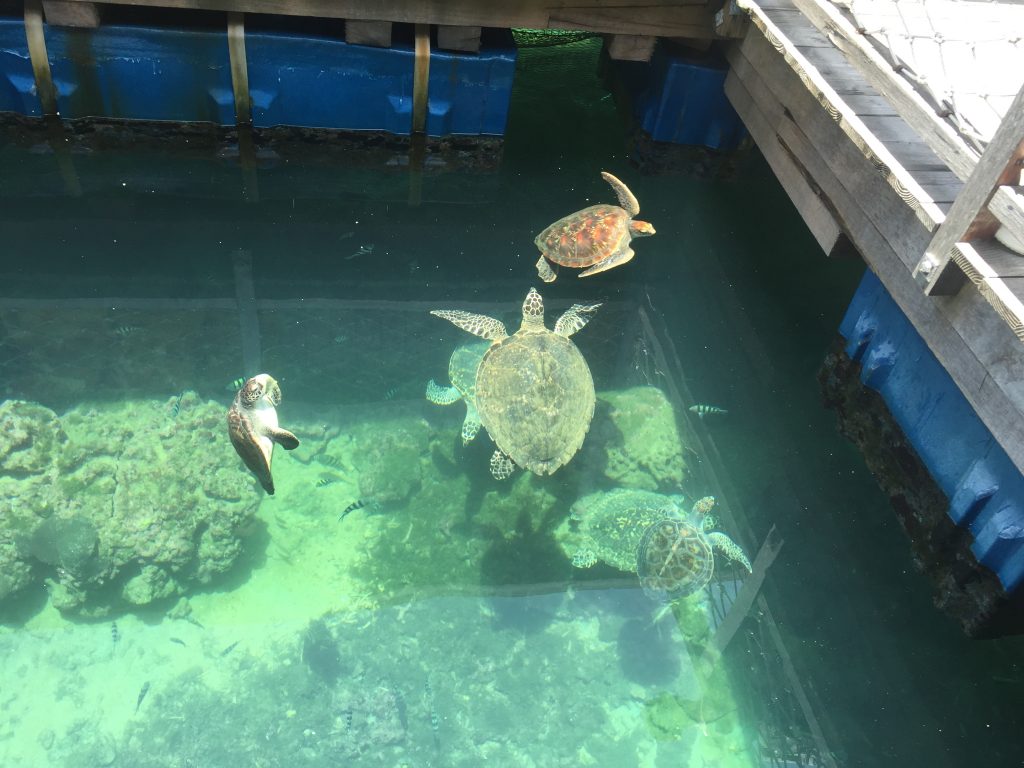 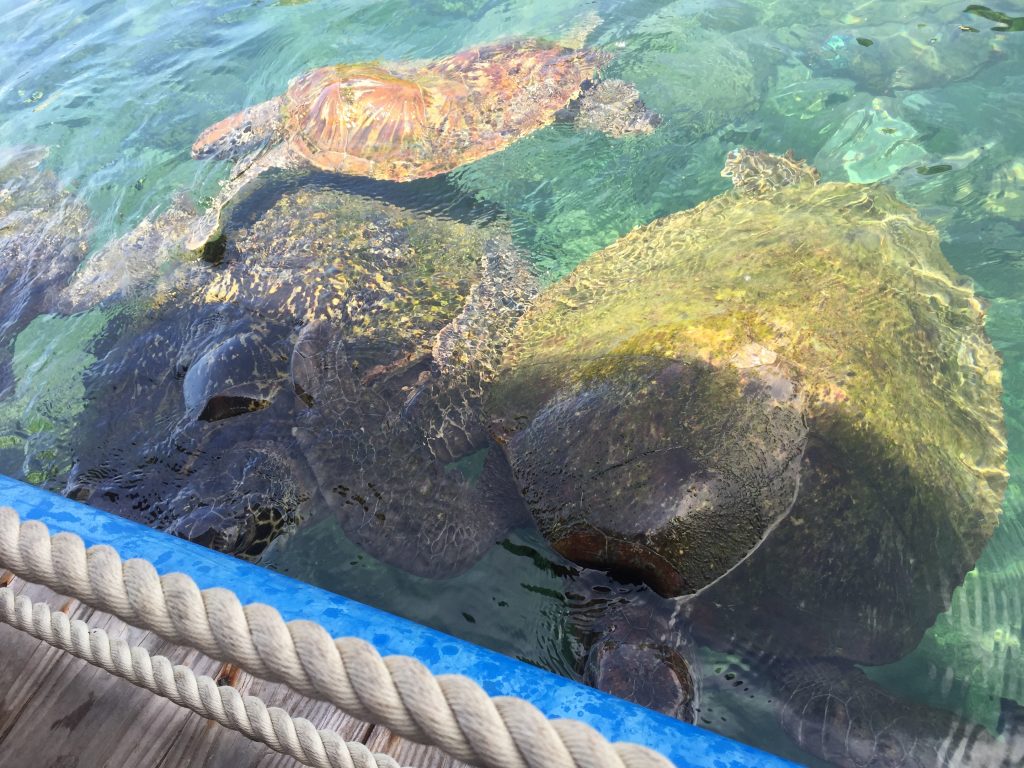 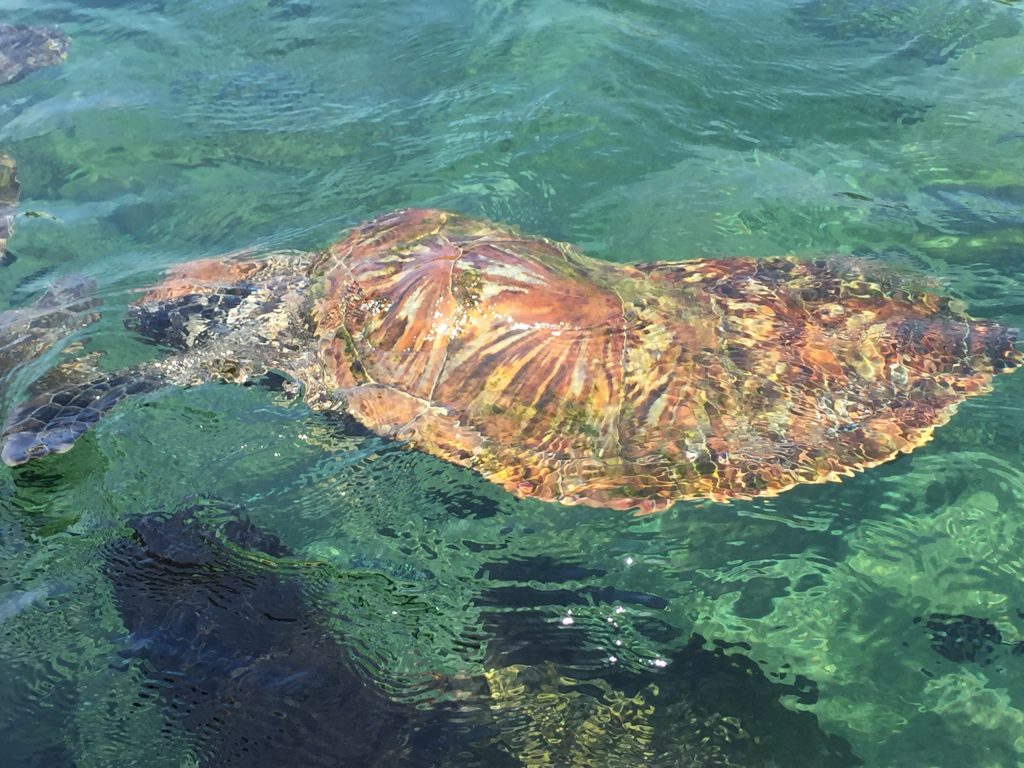 The one whale shark is kept in a circular area next to the dive training zone, meaning people who were learning to dive were only one net away from the animal. People could pay to dive with the whale shark itself and even feed it. The whale shark could not really dive (given its length and the depth of the pen), had very little room and was swimming in circles. It is clear that it could not display its natural behaviours and was distressed. The edge of its pectoral fins were abraded by the net. 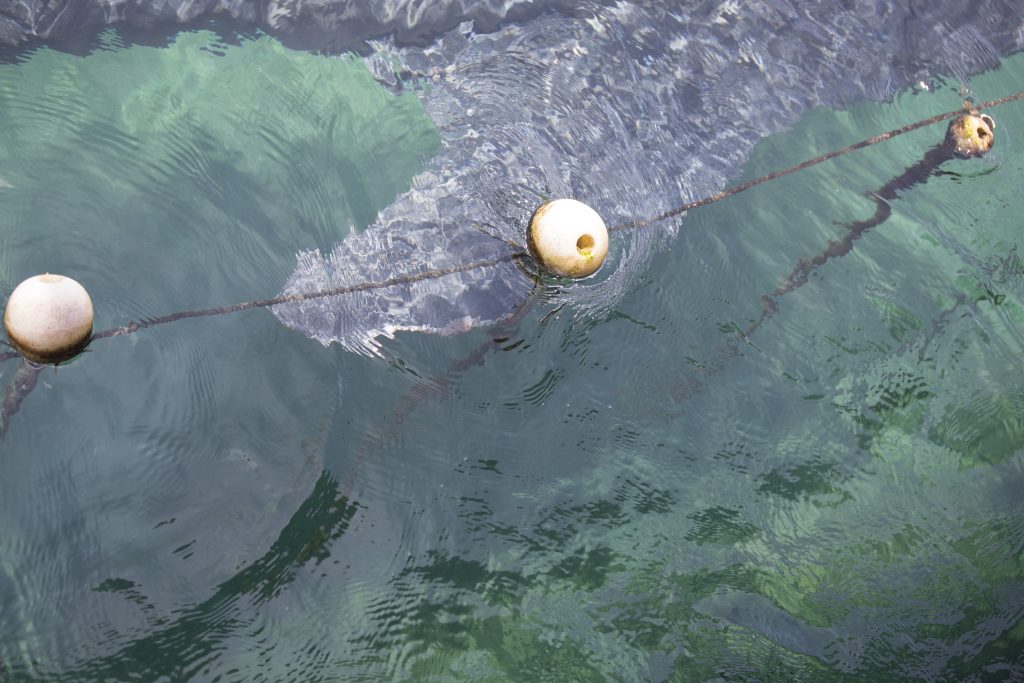 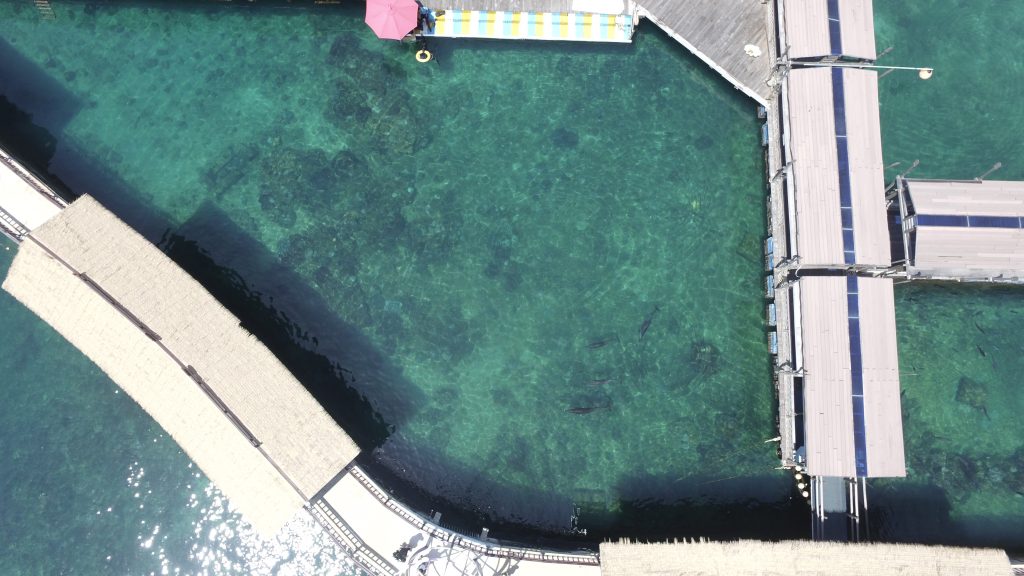 aerial photos taken by a volunteer with a drone 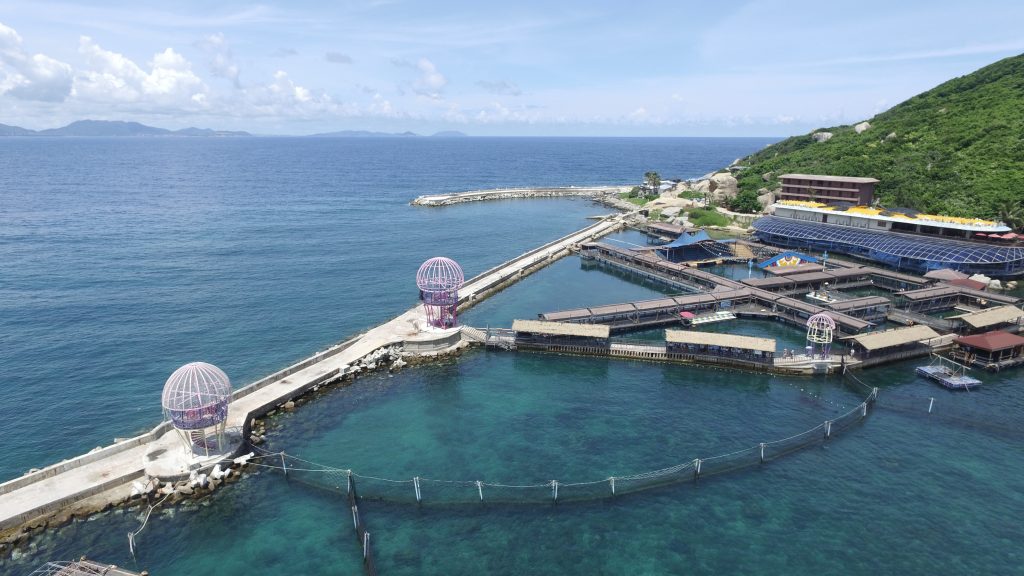 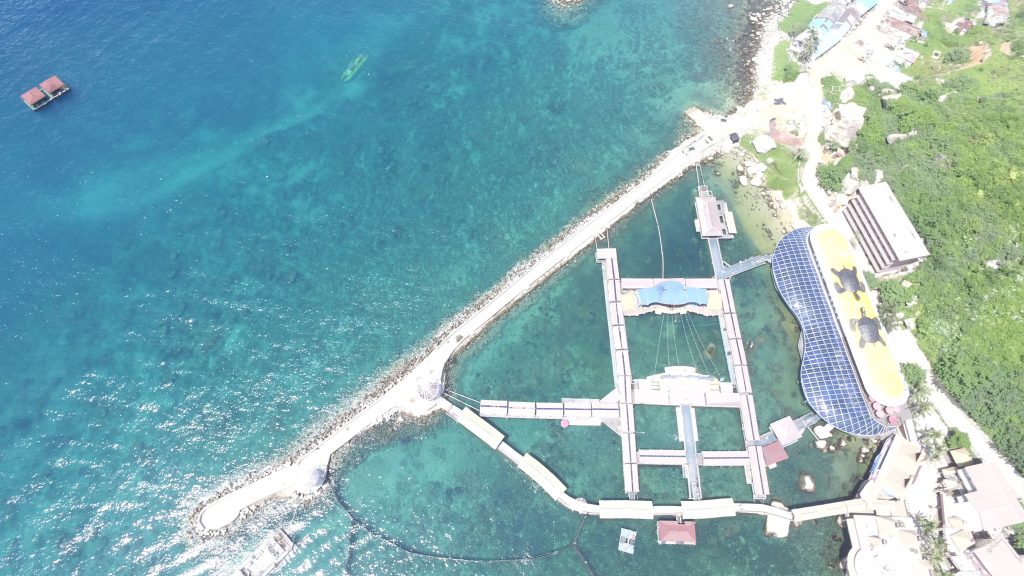