During the December 2018 visit , all four orcas performed together. At that time, the younger male was already covered with rake marks, from the teeth of other whales. In June 2019, the younger male had some deeper scarring and some of the scars, according to Dr. Rose, were fresh. One female did not perform. 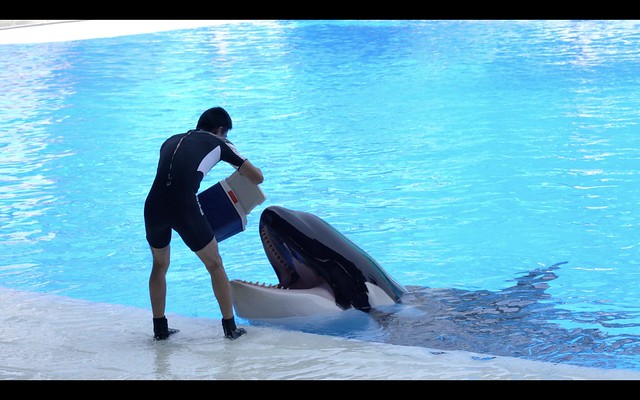 During the June visit, one of the female orcas swallowed a rope attached to a float and then, after allowing it to slip back out, vomited the contents of her stomach. This happened twice in no more than 60 minutes. This was the female who did not perform that day. This behaviour is equivalent to bulimia and is self-harming.

This female also had a unique circular open wound on her chin – its origin was unclear.  She also showed redness in her eyes. 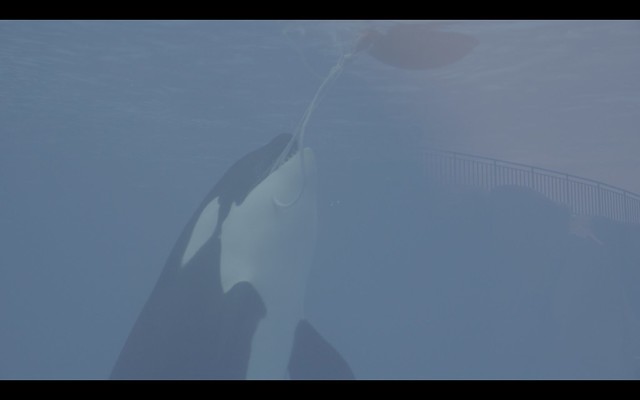 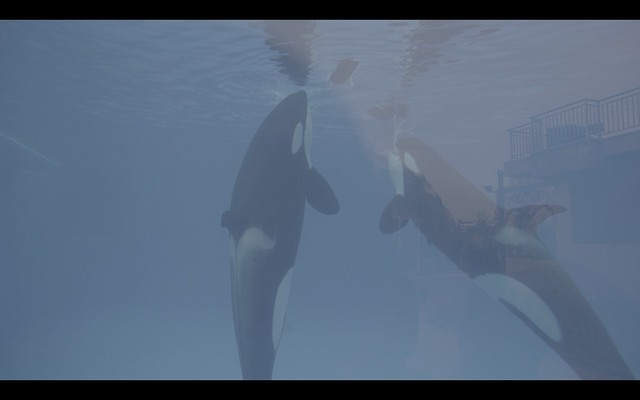 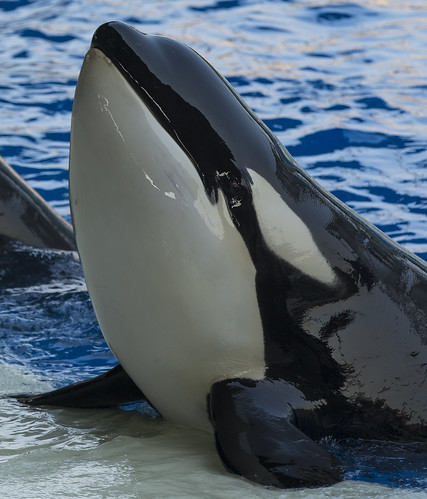 It seemed that the staff were preparing the animals for artificial insemination and our investigators noticed one of the trainers massaging the genital area of one of the female orcas.

In the orca stadium, there is a pre-show, with a quiz and a cartoon showing on the Jumbotron for the spectators. The quiz answers contained some obvious mistakes, such as “91m” for the question “how deep can an orca dive?” Orcas can in fact dive to over 900m.

The cartoon on the Jumbotron had narration in English and looked as though the production was created bySeaWorld in the United States The story was written by Steve Welch, who is the creative director at SeaWorld. The director and other crew members also had links to SeaWorld.

Last December, we saw some western staff during the orca show. One male staff member, called ‘Matt’ by other staff, walked out from the control room and was wearing a SeaWorld jacket and a training whistle. The photographers accompanying the investigation team got some aerial views of the park and the orca exhibit. 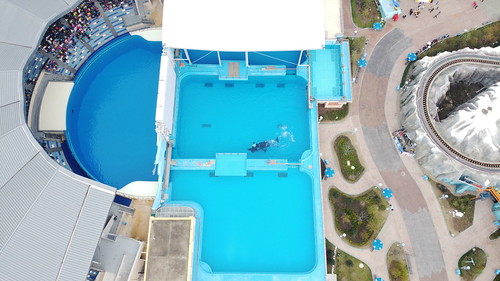 People can also observe the orcas at two underwater viewing windows. There were no signs or information boards describing the animals for visitors,  only a rolled up banner with the words “Grand Sea Circus” propped up in front of the larger viewing window.

Three belugas did an ‘underwater ballet’ with trainers, which consisted of the animals forming shapes with their bodies and ‘dancing’ with their trainers in from of the large underwater viewing window.  Outside of the performance, the beluga whales spent most of their time hanging more or less motionless in the tank. While the tank was relatively deep, the surface area was very small. One of the males extended his penis – why was unclear (there was no mating behaviour observed). This park may have plans to breed its cetaceans. 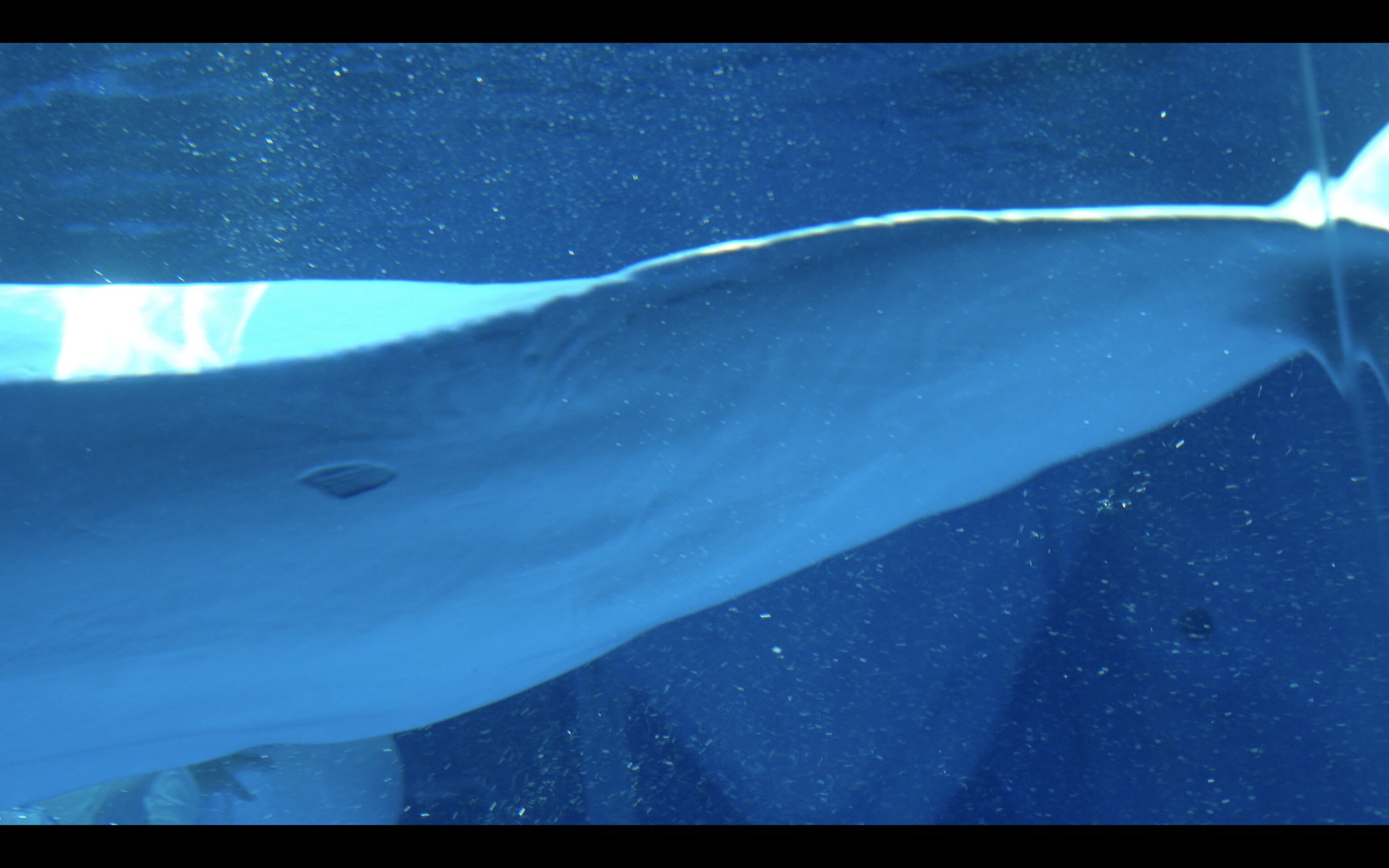 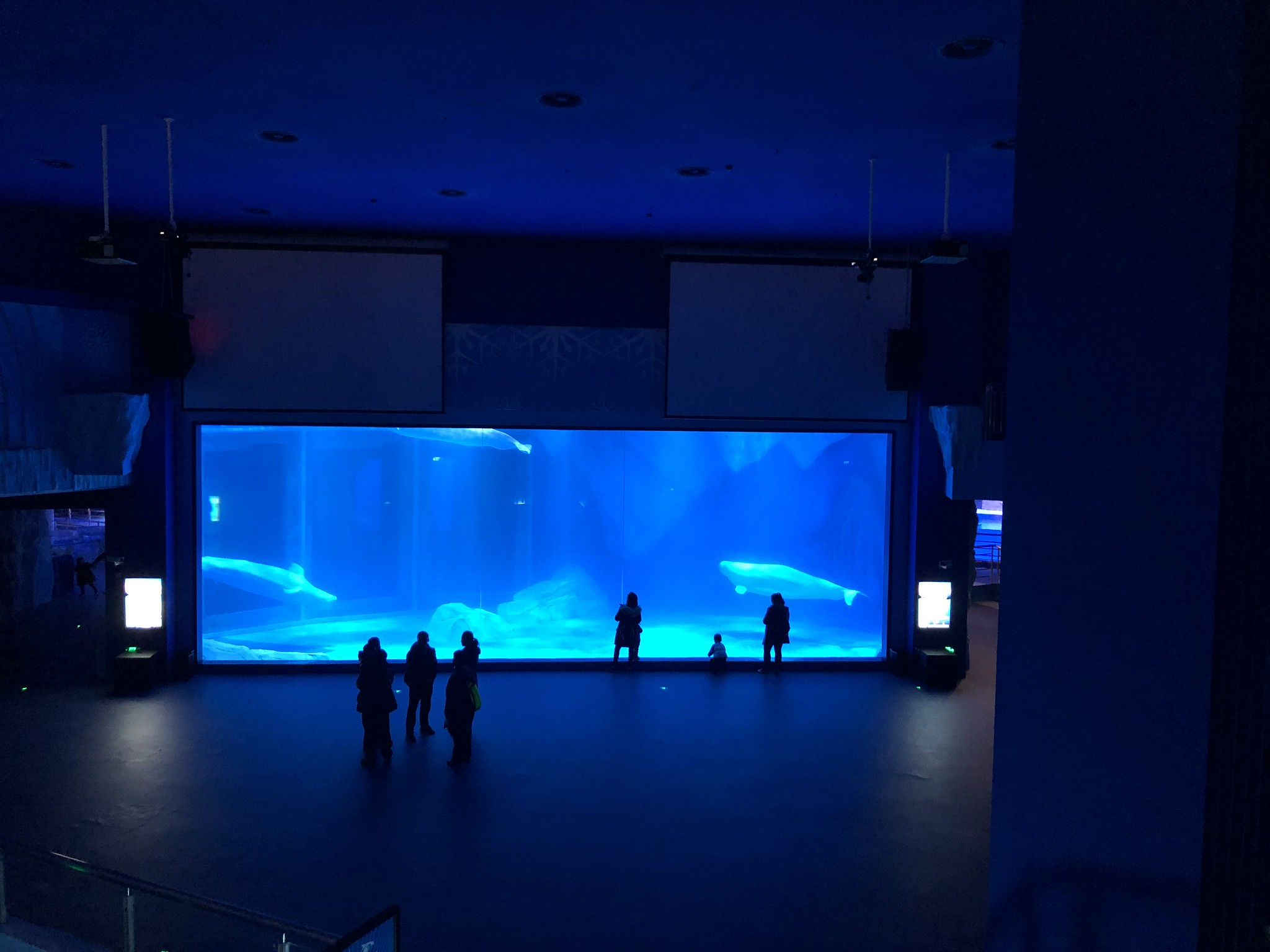 Outside the bottlenose dolphin theater, there is a shallow outside pool.  There were five Risso’s dolphins, who were undergoing some basic behavioural training. The animals looked mostly solid grey and didn’t have  many scars on their body (a normal characteristic of Risso’s), indicating that they were quite young. No signs or information boards were seen around the tank area and there were no staff stationed by the enclosure to give visitors any information on this species.

People can only see the bottlenose dolphins during the show. There were four  dolphins performing. The tricks were typical, but the music was extremely loud, causing the seating area and the floor to vibrate. This noise level is highly likely to be harmful to the dolphins’ welfare.

Four species of sea lions, fur seals and true seal were kept together in the same outdoor enclosure, even though some of these species are from the southern and others from the northern hemisphere . The main attraction in this enclosure is watching feeding sessions. The sea lions seemed to be very agitated and displayed some aggression toward each other, with frequent conflicts observed. The artificial stone work in the enclosure was quite slippery and some of the animals tripped and fell over some of the rock features. Sea lions were also in the walrus show, doing typical tricks such as handstands and tossing hoops. Some sea lions and seals were also kept in an indoor exhibit. A few seals pushed their faces against the viewing window hard, contorting their faces with the pressure.

There was one performing walrus, with both tusks intact. Normally captive walruses have their tusks removed, as they tend to break these teeth on the concrete walls of their enclosures (in the wild, walruses dig for their food in soft substrate). The tricks it was made to do were standard for many of these facilities, with nothing natural about its movements. The narration was not accurate and contained nothing educational.

Two African manatees were kept in a barren tank, with no soft substrate and no food (such as heads of lettuce). One manatee moved its muzzle along the bottom of the tank as if grazing on sea grass (natural manatee behaviour), but due to the hard concrete, it may have been wearing down its teeth and damaging the tank floor at the same time. Both animals’ elbow joints and tails were slightly warped out of their normal shape, suggesting the constant ‘grazing’ on concrete, ‘walking’ along a hard floor, was damaging their bodies.

There are two polar bears. One looked like a hybrid (perhaps with a brown bear) and the other a pure-bred polar bear. They are in the same enclosure, with a pool that holds freshwater fish.  These are not for food, but rather put in the tank for aesthetic reasons, but indicate that these marine mammals are being provided with only fresh water. 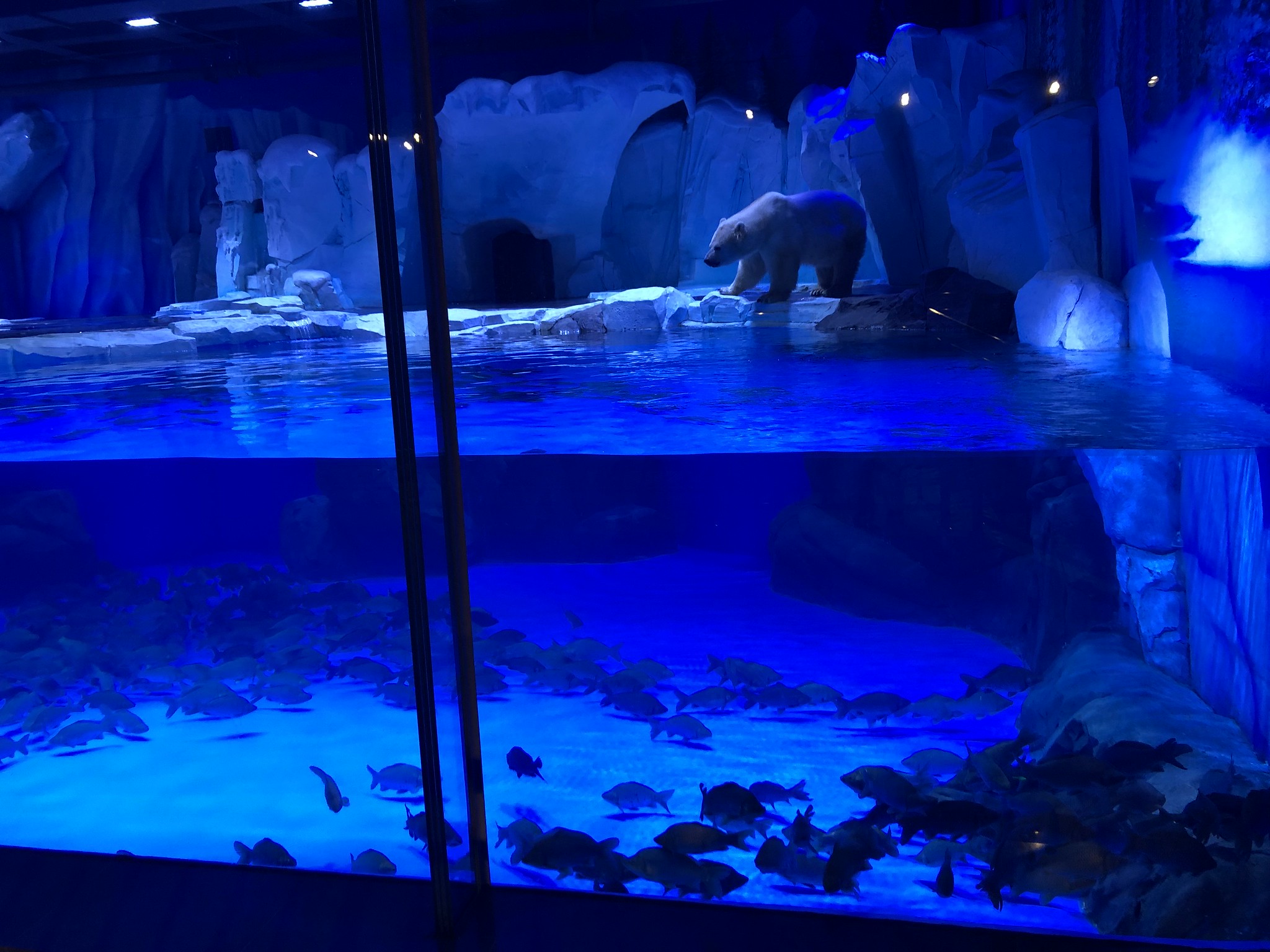