China’s Zhuhai Chimelong Ocean Kingdom is an industry benchmark for the use and harm of animals.
(March 2018)

If you want to talk about animal welfare issues within the domestic aquarium industry then the Zhuhai Chimelong Ocean Kingdom is creating a new benchmark for how bad things can get. Since its opening in 2014, we at the China Cetacean Alliance have been monitoring the park and the treatment of its animals.

Four years have passed and we have watched as the park has brought in more and more animals whilst at the same time noting that many have disappeared. The animal exhibition areas have almost no changes and the contents of the animal performances are more or less the same. 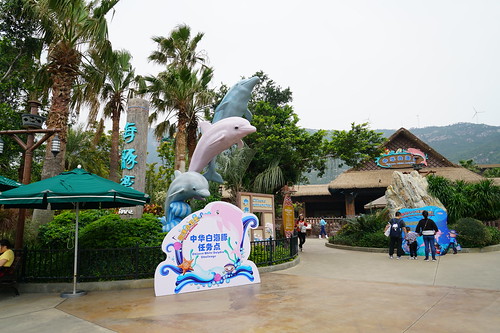 The three white dolphins seen this year are, according to the staff, a mother and son and father.  The mother and son kept close to each other and circled in a narrow pool. The male’s dorsal fin was obviously deformed and the snout had obvious trauma. The teeth were partially exposed in the lower jaw.

Staff said that this male often used his snout to hit the pool wall. “He is in the water, and giving him medication is also very troublesome. The medicine shouldn’t be allowed to go in the water.”

Experts working with the China Cetacean Alliance have confirmed that veterinarians give medication to dolphins all the time in dolphinariums. The idea that because they are in the water they cannot be given medications is untrue. Topical medication (on the skin) can be difficult to apply because it might wash off, but the dolphin can still get antibiotics, for example, which might help the lower jaw heal. 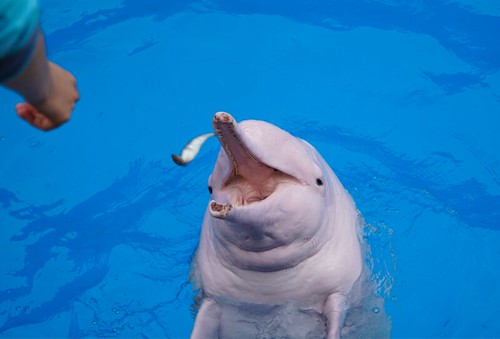 In addition to hitting the pool wall, the male also floats on the water for long periods of time. In captivity, other than waiting to be fed frozen fish, there is basically nothing to do – and for such supremely intelligent beings this is extremely cruel.

In the wild white dolphins are predators; however, in captivity they are fed a diet of frozen dead fish. Their physiology and psychology are greatly affected in these marine parks and therefore they are constantly suffering. 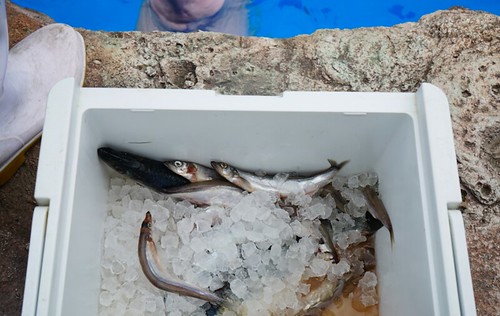 By the end of 2016, Dolphin Island had nine bottlenose dolphins and five pantropical spotted dolphins, but this year there were only eight bottlenose dolphins (there were still five spotted dolphins). Dolphin Island is very overcrowded with two different species of dolphins.  There is no enrichment to keep their intelligent minds occupied other than some artificial rocks.

Almost every animal is full of bite marks and other scars. One of the bottlenose dolphins also showed symptoms of cataracts. Within 30 minutes we observed several aggressive behaviours such as open mouth threats and noticed the spotted dolphins staying together in an attempt to resist bottlenose harassment, but they had no place to escape in this contained space. 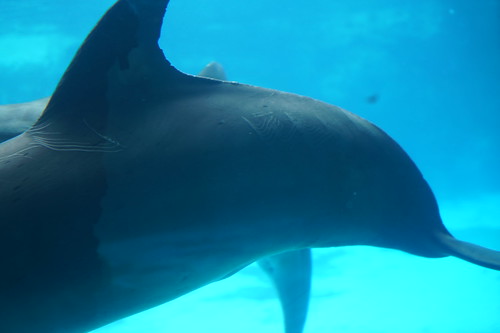 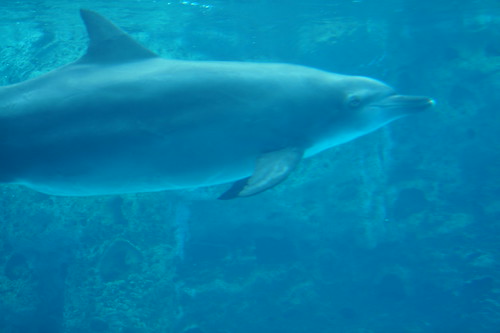 In the Dolphin Theatre area there are ten bottlenose dolphins from Solomon Islands and between four and eight Japanese bottlenose dolphins, together with the only remaining false killer whale (a total of seven false killer whales were purchased in 2013).
From 2014 to 2018 they have all been doing the same juggling performance. They struggled to complete tricks such as using their flukes to spray water on the spectators, jumping out of the water, nudging the ball and rushing to the poolside. 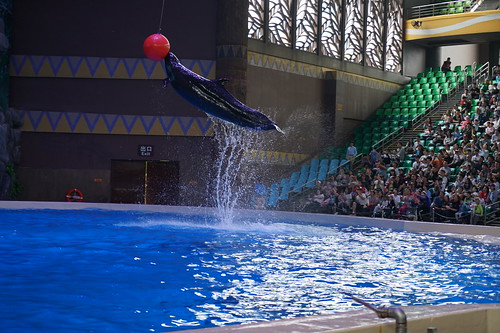 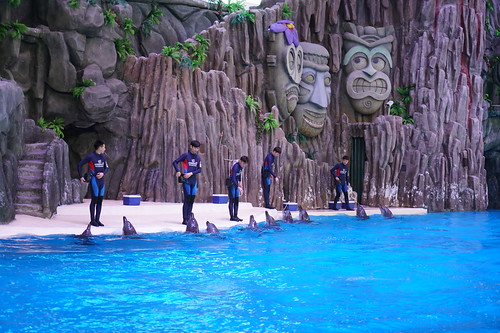 The same high-powered audio plays loud background music and invites visitors to lift their hands and touch them. After the end of the entire performance spectators can pay 168 RMB to have their photo taken with the cetaceans. 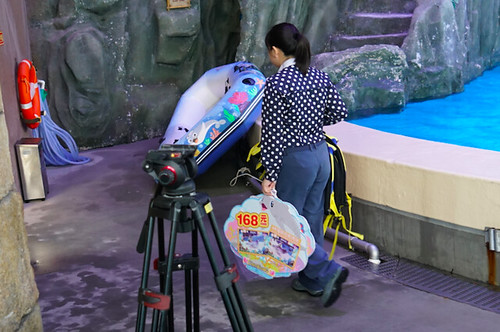 Astonishingly, this year, it seems a new trick was added. A dolphin drags an inflatable boat with its snout and carries a small child around the pool!

Clearly there is extreme danger to the children and extreme exertion on the animals. The vast majority of the audience are family visitors with children.  It is believed that many parents want their children to know animals and understand nature; however, watching such a show, in addition to receiving the idea that animals can be enslaved and that wild captive animals are required to juggle to please tourists, it is difficult to learn the concept of respecting life and respecting nature.

The eight white whales made a large profit for Chimelong in a TV program in 2015. But today, their living areas have not been expanded whatsoever and their enclosures have not improved at all.
The white whales cannot swim and dive freely and there is no way for them to hunt and socialise. 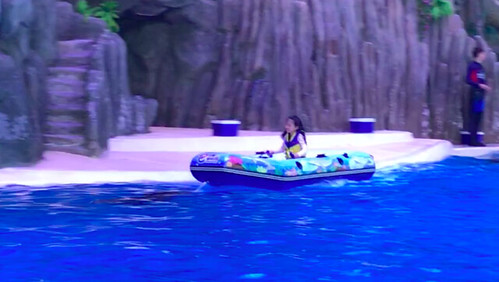 It’s the same loud stereos, same empty tanks without any enrichment, same theatrical show full of unnatural behaviours and no education content.
Sadly, what is different, is that it is now possible to hug and kiss the animals and many strangers every day do so whilst having their picture taken. 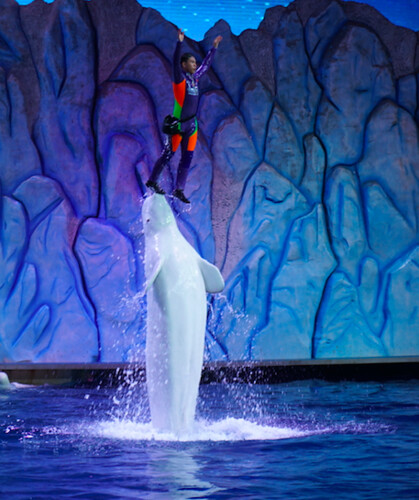 As for the 13 white whales in the White Whale Exhibit, every day they are either swimming around the pool or waiting vertically in the water to be fed.

In order to get a little more personal space they cling to the pool wall. The narrow space can make the imprisoned animals more agitated and more prone to aggressive behaviour. It is not surprising that the white whales are covered in scars all over their bodies. 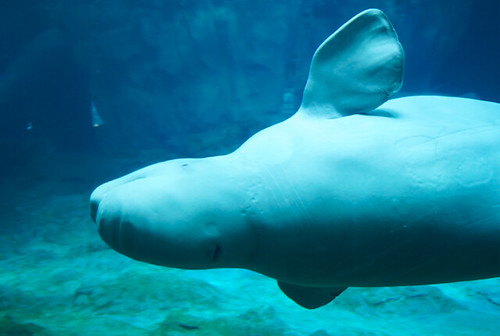 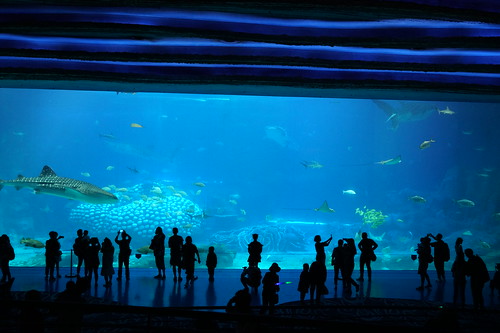 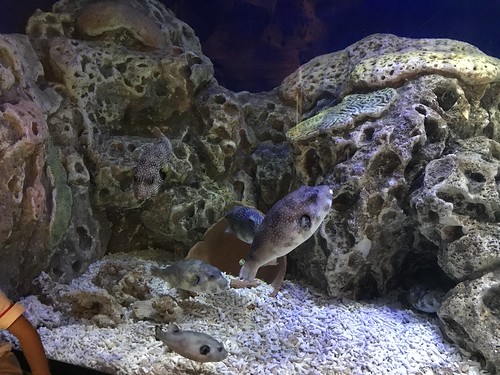 The numbers of whale sharks were reduced from eight to five, each with caudal fins and the sides of their bodies with varying degrees of abrasions and tears. Some industry sources have stated that this kind of abrasion of the tail is difficult to avoid because of the limited space. Animals must scrape the glass and the pool wall when manoeuvring in the tank.

In addition to the fact that the survival needs of whale sharks are difficult to satisfy, this proves once again that keeping these marine giants in captivity does indeed bring suffering to the animals. 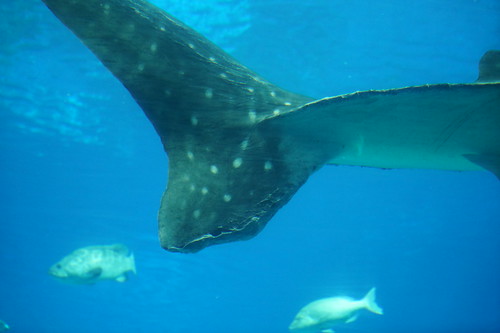 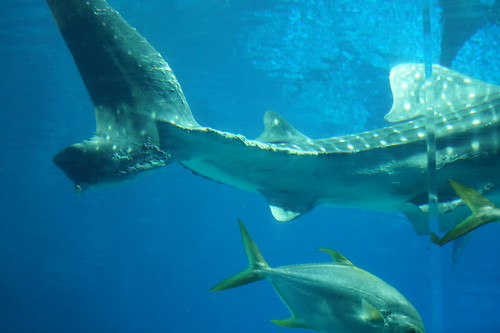 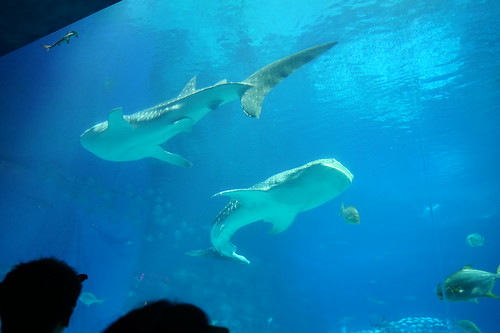 These animals are showing common signs of stress, with hair loss (Alopecia Areata) and self-mutilation by biting their paws.  The floor of their exhibit is not cleaned and there is no substrate or earth for the foxes to dig holes, which naturally wears down their claws and prevents them from becoming overgrown. 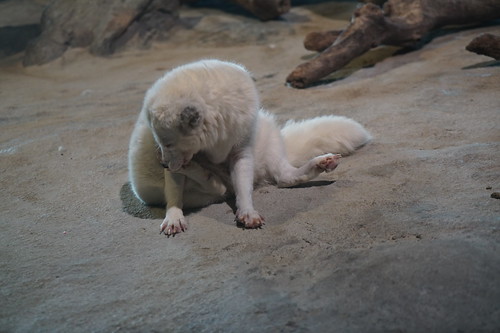 Many foreign countries have already stopped the captivity of animals that have complex welfare needs and habitat requirements such as cetaceans, polar bears and elephants.
However, in China these animals are still very common.
Although the two polar bears in Chimelong have ice machines and are housed indoors, the total space is not large and the temperature at the enclosure is still far too high for the bears. In addition to walking around in circles they have stereotypic behaviours such as shaking their heads and both bears are very thin.

Chimelong has sea lions, bearded seals and walruses. Some are used to perform for the crowds in the open air arena such as acting as harlequins, balancing balls and various other tricks that are completely unnatural for these animals. 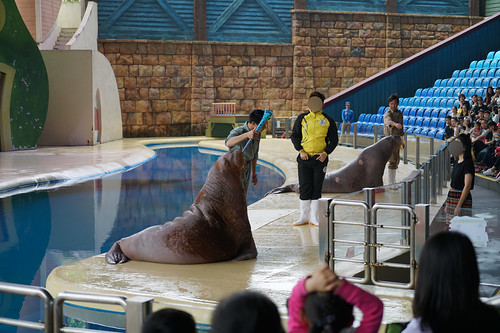 The tourists have the option to feed the sea lions and seals with readily available free food and as a consequence the animals are not fed appropriate amounts. 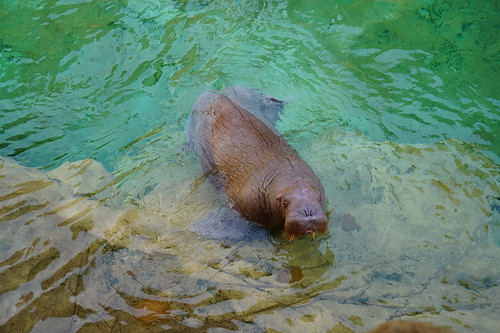 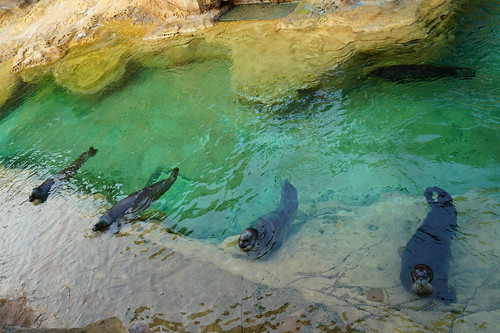 Almost every animal you see in the aquariums at Chimelong Ocean Kingdom was captured in the wild. There are more casualties hidden behind the ones you see, due to the stress and trauma of capture and transportation. The captive-born animals are deprived of the real life they should be living.

Except for their appearance, these captive animals share little with their wild and free counterparts. The captive animals are physically and psychologically constrained, and wild populations are harmed by captures.

Please do not support marine parks or aquariums that have captive cetaceans and be aware of the suffering that can go on behind the scenes.